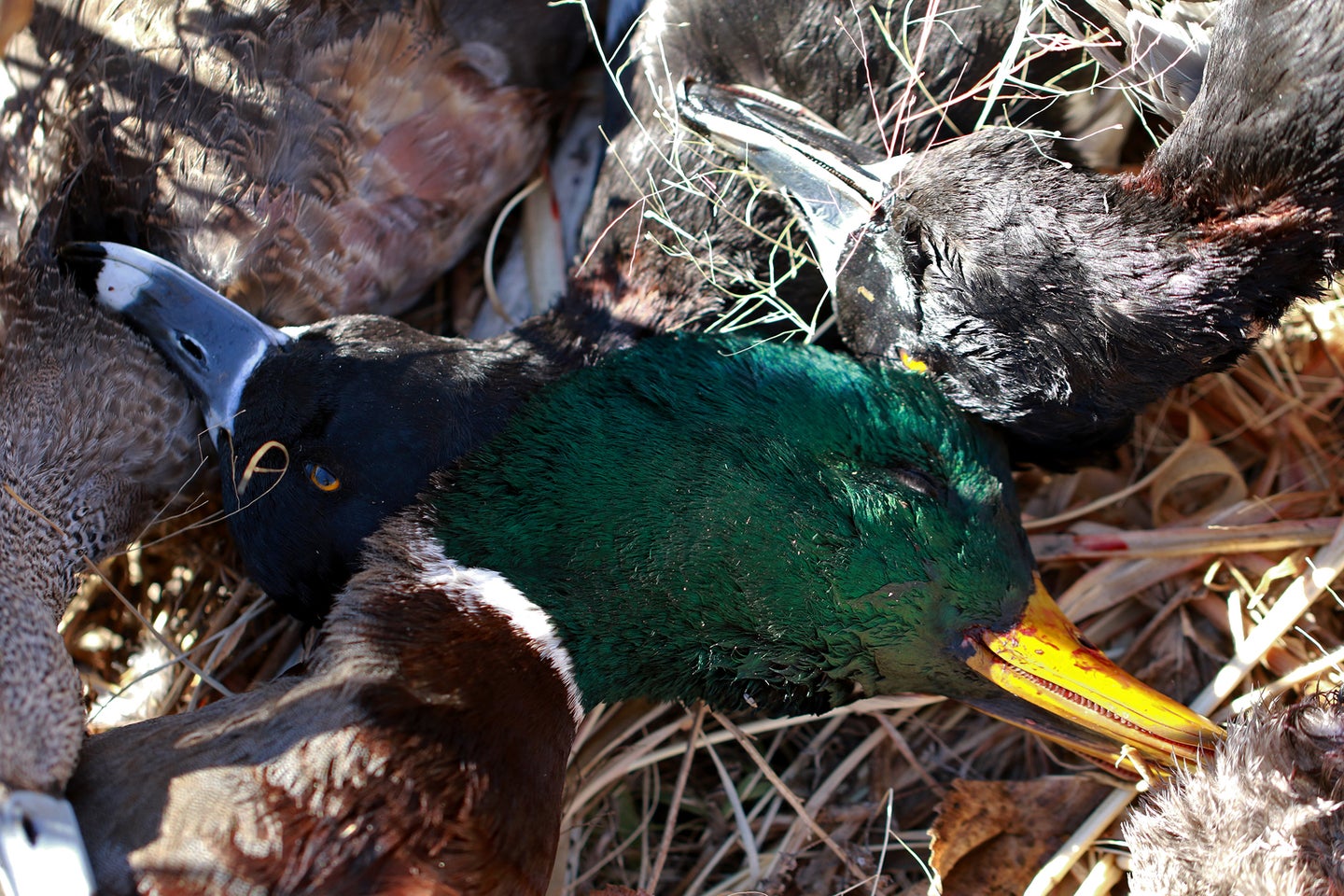 The greenhead might be the king of ducks for waterfowlers, but he's not the only duck that's worth getting excited about. Natalie Krebs
SHARE

There was a lull in the action and our guide Mike Stahlman was searching to fill the silence that had crept into our duck blind. As any veteran duck hunter seems to do, he got to bitching about other duck hunters.

“One thing that I just can’t stand is when people call them ‘scrap’ ducks,” Stahlman said, with real frustration in his voice. “If they’re just scrap ducks to you, then don’t shoot them.”

That morning we had shot a few gadwall, wigeon, and ring-necked ducks. These species, along with teal and shovelers, often get categorized by uppity duck hunters as scrap ducks or bonus ducks. In other words, they are the ducks that aren’t mallards—and therefore less somehow, a side note to what real duck hunting is all about. Somehow pintails, black ducks, canvasbacks, and wood ducks (unless you’re hunting Arkansas green timber) get spared from the derogatory scrap duck category. And this whole “scrap duck” sentiment pissed Stalhman right off.

But if Stahlman was looking for an argument, he wasn’t going to get one from me. I love shooting ducks. All ducks. Now, I won’t lie. If I had to pick one hunt to be my last, it would be a late-season greenhead shoot (in a howling blizzard, just me and my dog). But some of my best duck hunting memories are of bufflehead swarming a mallard spread on a windy lake in Wisconsin, gadwall dropping from the stratosphere to get into a half-frozen pothole in North Dakota, and teal and shovelers screaming through a pass-shoot in Mexico. According to greenhead snobs, some of my best duck hunts were for nothing more than scraps? I beg to differ. —A.R.

Who Are These Greenhead Purists?

Southern duck hunters take the lion’s share of the blame for only shooting green, as well they should. Killing mallards is woven into the fabric of southern hunting society. And for a long time, they didn’t have to bother with Stahlman’s scrap ducks because there were an abundance of juvenile mallards willing to die over the MOJOs. But times have changed. There are typically fewer migration days each season, and greenheads are getting older (thus wiser), and avoiding hunting pressure (more on this later). And while there are more species of waterfowl are dropping into southern rice fields each fall waterfowl are dropping in to the southern rice fields each fall (I’ve seen it), the boat ramps still bustle at the public green-timber tracts with hunters who are in pursuit of mallards only.

In Arkansas and the Mississippi Delta, tradition dictates you stand next to an oak tree or in the flooded rice with your friends and family on a cold morning in December or January, trying to trick big wads of mallards—and nothing else—into the kill hole. It’s generational greenhead snobbery. I once shot into a flock of six shovelers on a hunt in the Delta, and my host never invited me back. But that’s not all southern duck hunters. While the mallard is still king in Dixie, I’ve hunted with plenty of southern gentlemen who, after their fifth bourbon, boast that they “only shoot green.” Then the next morning they empty the magazine when a spoonie bombs the spread.

And there are plenty of hunters privileged to live and hunt in areas outside the South where there’s no shortage of mallards. It’s not 100-percent their fault for perpetuating mallard privilege; it’s all they know. If you hunt places like southeast Kansas or the North Platte River after Christmas, there’s not much you can do but shoot mallards because there really aren’t any other species of puddle duck around. But that doesn’t stop them from bragging about the five greenheads they shoot every day from late December to the end of January.

Outfitters, waterfowl brands, YouTube heroes, and yes, iconic publications like Outdoor Life, have leveraged their Instagram and Facebook followings to put greenheads on a pedestal. During the fall, it’s one photo after another of greenhead limits, as if that’s the only bird we are willing to shoot. But that’s bullshit. Because it gives those people scrolling along on their iPhones a false sense of reality and makes them think, “Okay, I’m only shooting mallards.” Truth is, there is pretty much no one out there who kills only greenheads every day of the season. But not everyone understands that. And folks who don’t hunt much end up believing they have to always limit on mallards. If they don’t, it’s a failure. That’s just not realistic, and it’s not good for duck hunting. —J.G.

The Problem Is Pressure

We hunt ducks too much. That’s probably not going to sit well with most duck hunters. Pressure is the single largest factor in displacing waterfowl, and far too many people don’t understand that you must treat your ducks right if you want to continue hunting them all season long. Mallards are some of the most over-hunted waterfowl because so many duck hunters are chasing them. We are hunting greenheads too often in the same places our grandfathers did, and they aren’t coming back to those once ducky haunts anymore. One of the things I hear most often is that southern duck hunting is dead. Well, it’s only “dead” because hunters aren’t adapting, or can’t get access to the places greenheads are now going. Mallards still come to well-maintained and managed habitat in the South (mostly private clubs). Public and poorly managed private spots don’t have ducks because birds know if they go in there, some Phil Robertson wannabe is going to skybust them at 80 yards. Plus, states generally can’t afford to maintain properties like wealthy private landowners can, so their habitat is not as good.

You have to hunt the days when you know mallards will fly (or at least, you think they will), and not constantly be out there, running the boat, calling, and taking shots at ducks. I know many of you are still mad at the ducks, and by god, you are going to hunt all 60 days. I get it. But don’t complain when you come back in with an empty lanyard. Because ducks hate to be pressured. Hunting 10 days straight when the low is 62 degrees does not make you a hardcore hunter; you’re actually making the harder for yourself (and the rest of us). Ducks need a respite, and to be left alone, so let them do so on the mornings when they are least susceptible to being killed.

Another issue is constantly taking too many hunters when you find a good number of mallards. Again, I get it. Maybe you haven’t had many hot shoots this year and this is your chance to pound on those stubborn greenheads. But setting up 10 panel blinds on a center pivot in the middle of a milo field and bringing 30 of your friends for one rip at them is just plain dumb. Fewer hunters means you will need fewer birds to fill limits, and you will educate far fewer greenheads while doing so. It also means you’ll have a chance hunt the field more than once if you leave with minimal disturbance and let the remaining birds get in there. —J.G.

It seems that the saltiest old duck hunters I know are happy to shoot any kind of duck if he cups wings over the decoys. It’s more about the hunt and the experience than the species and number that ends up on a strap.

Stahlman grew up hunting in the south with his dad. He killed his first duck when he was eight, shooting crippled birds from the bow of the duck boat with a .410 (“Don’t tell your mother what you’re doing out here and I’ll keep bringing you,” were the instructions his dad gave him). Now Stahlman chases ducks all over the country and spends his winter guiding in Oklahoma through Legends Waterfowl. When I came down to hunt in Oklahoma, I was hoping for a classic field hunt with mallards and geese fighting a cold winter wind to feed. Instead, we found that the mallards and geese had not yet arrived in big flocks. So our only option was to shoot gadwall, wigeon, and ringers over water. That’s what we did, and we enjoyed every minute of it.

Ramsey Russell travels the world hunting ducks, and is the self-proclaimed king of shoveler shooting. I hunted with Russell in Mexico and had never seen someone so enthusiastic about shooting spoonies. His excitement rubbed off on us all and our group had as much fun shooting shovelers as anyone has ever had hunting greenheads. One of the many sayings Russell likes to quote is: “When times are tough and flocks are small, take your time and kill them all.” Note that it’s not “kill all the greenheads.”

A few years ago I got to hunt with Field & Stream’s hunting editor Will Brantley in North Dakota. It had frozen overnight so we kicked open a little pocket of water in a pothole where we’d seen flocks of mallards circling. I went to hide the truck while Brantley built a makeshift blind. On my walk back to the blind I heard Brantley fire three quick shots and then holler “I just shot a triple!” I arrived to find three dead gadwall in the spread and a look of pure satisfaction on Brantley’s face. “They came in just perfect,” he said.

I suspect that the further you get into your duck hunting career, the less you care about the species or the number of ducks you kill. And I hope that our younger generation of diehard duck hunters—those guys who are glued to social media and live for the “grind”—start to recognize this as well. Our sport will probably be better for it.

Spend enough time in a blind and you’ll start to see that each species has its quirks, challenges, and intrinsic value. No one species is all that much better or worse than any other. Greenheads may always be our favorite duck species, but they’re far from the only duck species worth obsessing about.