What It Feels Like to Miss the Biggest Buck of Your Life, at 45 Yards

When buck fever spirals into a complete meltdown, it might be time to call it quits 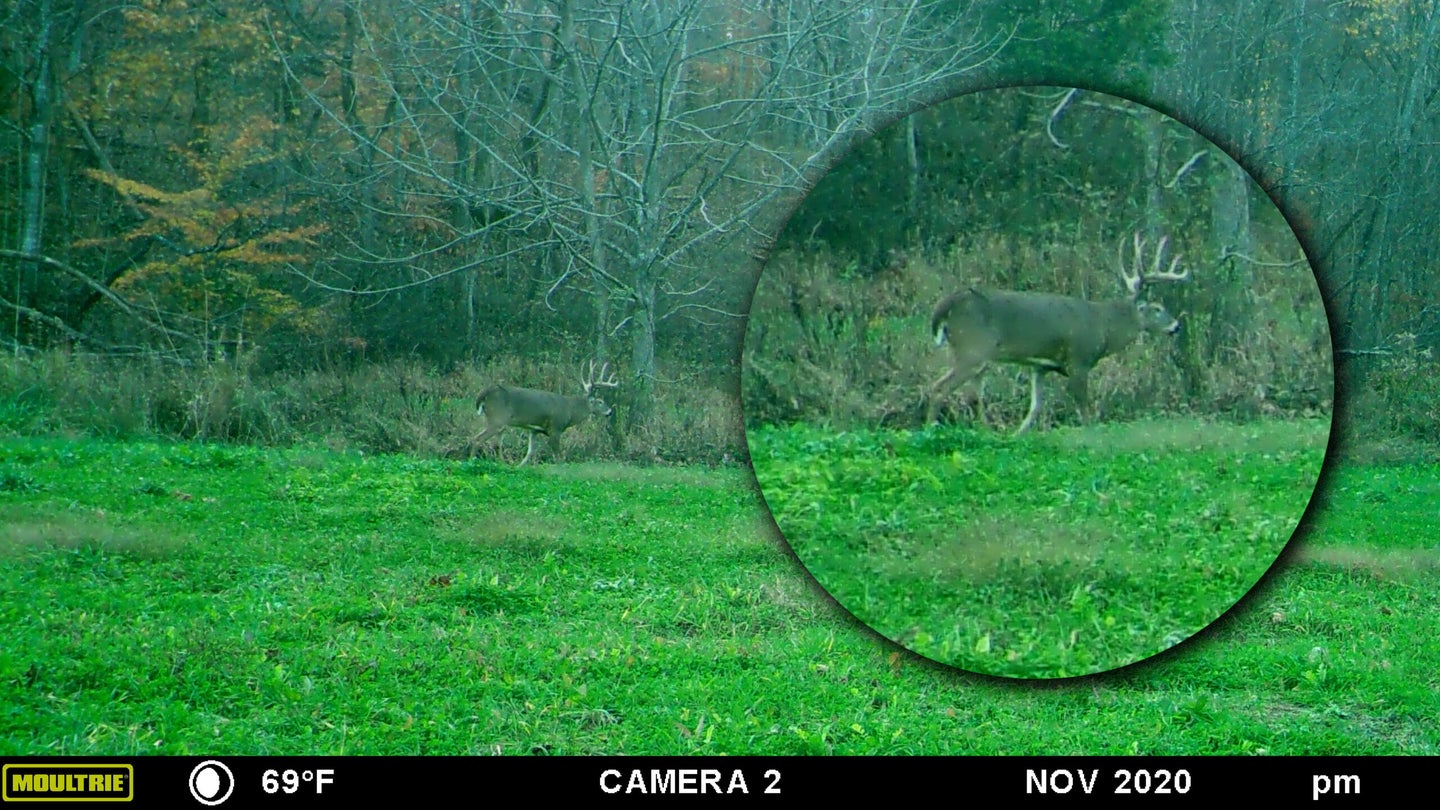 One of the few trail cam photos of the big buck, with a close up. Natalie Krebs
SHARE

Everything was perfect, until it wasn’t.

The family farm hadn’t been pressured much this year, which boded well for the second weekend of rifle season. The lukewarm temps had fallen 20 degrees. The rain I’d sat in for 12 hours straight the previous day, from dark to dark, had finally stopped.

So when I climbed into the double stand Sunday afternoon, warm and dry and with space to stretch out, I slipped almost instantly into a daydream. Just as you do during any sit in the deer woods, but especially during November, when those daydreams actually have a chance of playing out. It’s the rut, right? Anything can happen.

I sat there for an hour or two, watching through the trees and willing a big buck to show. Most of all I wanted to see the one I think of as the Iowa buck. An Iowa buck, you see, because he’s too big to live here. I pictured it, even, him walking along that trail, waiting at the field edge, maybe hitting the scrape, then turning out into the plot for a broadside shot at 80 yards.

Something shifted, and it took a beat for me to realize the wind had died. It was completely still, just for a moment. I lifted the call around my neck and grunted once. Soon the wind picked up again, tossing the treetops and tugging at my hood. It didn’t stop blowing when the Iowa buck appeared 15 minutes later, but I stopped hearing it.

They say if you hunt deer long enough, you’ll wound one. Or miss one. Or shoot up a box of shells. They say buck fever will go away, the more deer you shoot. But mine is getting worse.

I killed my first deer on my feet in a ladder stand, muzzleloader steady against the trunk. I made a perfect shot at 100 yards and managed to keep every feeling but curiosity at bay until I found her. When I did, there was no turning back.

Now I’m not sure I could make that shot, as badly as I shake with adrenaline. I need as much physical support as I can get in the field, as many points of contact as I can manage. And sometimes, that’s still not enough. The first time I ever heard the drumming of a gobbler, it was like the dashboard scene from Jurassic Park. I couldn’t see the two toms, but as the thrumming got closer, I felt it reverberating inside my chest. My shoulders shuddered so badly that, had one ever stepped out, I would’ve missed by a mile. Instead, deputy editor Gerry Bethge leaned over and, trying not to laugh, whispered, “What the hell’s the matter with you?”

This fall, I killed a doe with my bow. I’ve killed lots of does, and enough of them with my bow that I shouldn’t get worked up over it anymore. In the video from the hunt, you can see the moment when I decide to shoot her. Not because I say anything, but because my arm starts rattling as if I’m trying to elbow myself in the ribs.

When I was jogging single file behind two buddies this fall, closing in on a last-light Coues deer, one of them turned around—a veteran Coues hunter who knows about my buck fever—and whispered like a coach: “Get some ice in your veins.” Those words had the instant and opposite effect of the one he’d intended. I did not slip into a cool, calculating state of mind. I know about this place because it’s my natural reaction in times of pressure, or real crisis. I don’t just keep my head playing varsity sports, or when I’ve gotten lost in the backcountry, or in the face of medical emergencies. I thrive.

But instead of going to this calm place on that Coues hunt, my stomach curled up like an armadillo and ricocheted around inside my gut. I hated that I felt like this at all—that I had no control over it. But it also made me grin, somehow, as I scrambled up the hill into position. Just like the drop in your stomach when the roller coaster lurches over the highest point, and you plummet into the ride you knew was going to make you scream. But that thrill is exactly what you’re after, so you go anyway.

And that’s the irony of buck fever. It makes hunting incredibly difficult for me. But that rush? That adrenaline? I chase it. If I didn’t get worked up about killing deer or turkeys or elk, I doubt I would do it. I hunt for a lot of reasons. But if I’m being honest, it’s because it makes me feel alive like nothing else can. That amount of adrenaline dumping into my bloodstream is a drug. Hunting leads to highs of pure euphoria. It also leads to lows of pure self-loathing and doubt.

I don’t remember shaking at the shot.

I do know the buck came in on the same trail the deer always do. I heard him first, then saw a buck. He dipped behind a big oak trunk, and when I saw him again, I knew exactly who he was.

This is actually happening, I remember thinking. I’m going to kill him.

Not because I was complacent, already picturing setting down my rifle beside him in the clover or the shoulder mount on the wall. But because that was the only possible outcome of the scene unfolding in front of me. He was going to step out in the field, and I was going to shoot him when he did.

He paused at the entrance to the field for half a second, licking a branch as he entered the field. But instead of turning broadside like I’d pictured, he beelined straight for me in search of the grunt he’d heard. That’s when I started panicking.

Don’t look at his antlers, I thought, even as I looked at his antlers. They were hard to miss: curved and white and sweeping out to his nose and above his head. His shoulders were broad, his body dark. And he was moving fast.

My stand didn’t feel hidden, and he kept tipping his nose into the air as he closed the distance. The wind was in my favor, but I kept thinking, He’s going to see me. Not because I was moving but simply because he was that close. When he finally paused for just a moment, near enough to shoot with a bow and quartering to me, the crosshairs in my scope settled on the point of his shoulder. Someone shouted “NOW!” inside my head, the rifle went off in my hands. The buck spun on his heels. The plot was so small and he ran so fast that by the time I jacked another round into the chamber, I got one last parting view of his antlers disappearing into timber.

I don’t remember how long I sat there. I didn’t swear, or pray, or think anything at all. I just knew I had missed. And maybe, worst of all, I wasn’t surprised that I had.

I noticed the shaking when I climbed down the ladder. The metal banged so loudly, shuddered so uncontrollably, that I actually stopped halfway to quiet the clanging cotter pins. But willing my legs and arms to stop made it worse, so I just descended faster before I rattled myself off the rungs and broke more than my heart. There was still enough light left to look for blood, but thirty minutes of desperate searching didn’t turn up anything.

RELATED: The Fever (An Incomplete Memoir)

“We’ll find him,” my dad said as we left camp the next morning. He’s not one to give false hope. I think he said it because he couldn’t imagine how anyone could miss a deer at that range.

We didn’t find him. We didn’t find a single speck of blood—nothing to suggest a deer hunter had been sitting here when a shooter buck walked in front of her. Just the churned-up leaves and wet earth where the buck ran out of the plot and down the hill. We searched for hours anyway, canvassing the bedding area that had remained untouched for years, combing thorny hillsides and peering into ravines trickling with runoff. Looking for a body, a bed, buzzards—anything. After three hours searching for a deer I’d known we wouldn’t find, I called it.

There’s a camera hanging close to the stand and, before we picked up the trail that morning, I pulled the card. The buck had walked in front of it before my shot sent him spinning back the way he came. I had hoped the pictures would provide clues for the search: exactly where he stood at the shot, maybe where he ran into the trees. But most of all, I just wanted to look at him again.

The card was blank.

I’m capable of making precise shots at critical moments. Those are often the perfect shots, the ones where there’s no time for feverish anticipation, just action. Because if I wasn’t successful or ethical, I would’ve quit hunting a long time ago. And I can overcome the buck fever, in most situations. It’s just something I deal with—sometimes better than others.

I know all the marksmanship fundamentals, the ones that allow you to print tiny groups and pound targets at 500 yards and beyond, because I can do those things. Get steady, take deep breaths, shoot during your natural respiratory pause, squeeze the trigger until it surprises you, follow through. I know all the things I should’ve done, that other hunters would have done. But all the checklists in the world can’t help if your mind goes blank at the moment it really matters.

All my buddies told me it’s better to miss clean than to find blood and no deer, which is perfectly true. I would rather suffer for my stupidity than the deer. But it’s also idiotic to miss at such a range. It feels like failure of the worst kind. Not the kind of failure where you learn from your mistakes, but the failure where you finally realize you might not be cut out for this. It’s the kind of failure that suggests you should move on to something you can handle. Decoy carving, maybe. Or fly fishing. At the game still, just benched.

Because what’s the point? What’s the point of putting in all the expense, all that preparation, all those early mornings, all that effort, if you’re just going to shit the bed when it all comes together? I can out-hike, out-sit, and outlast many hunters. But why run up a mountain or wait in the rain all day if you can’t even kill the deer you’ve been dreaming about when he finally shows?

I don’t have an answer. And I won’t give up deer hunting, because I can’t. I love it too much. Sometimes the roller coaster makes me sick. But once the nausea fades, there I am again, buckling myself in for another wild, hellish ride.

I want to fix this physical response to a mental problem, and I hope to one day. There are rifle courses, expert trainers, endless practice sessions so that muscle memory can take over when conscious thought fails. Even if I do cure this fever, though, part of me doesn’t want it to go away, not entirely. I don’t want to become a hunter who gets tired of killing does, or indifferent to filling a tag.

But I don’t think there’s any risk of that.