Planning to Hunt Alaska Someday? Here’s Why Caribou Should Be Your First Trip

Caribou are the gateway big-game animal for hunting Alaska 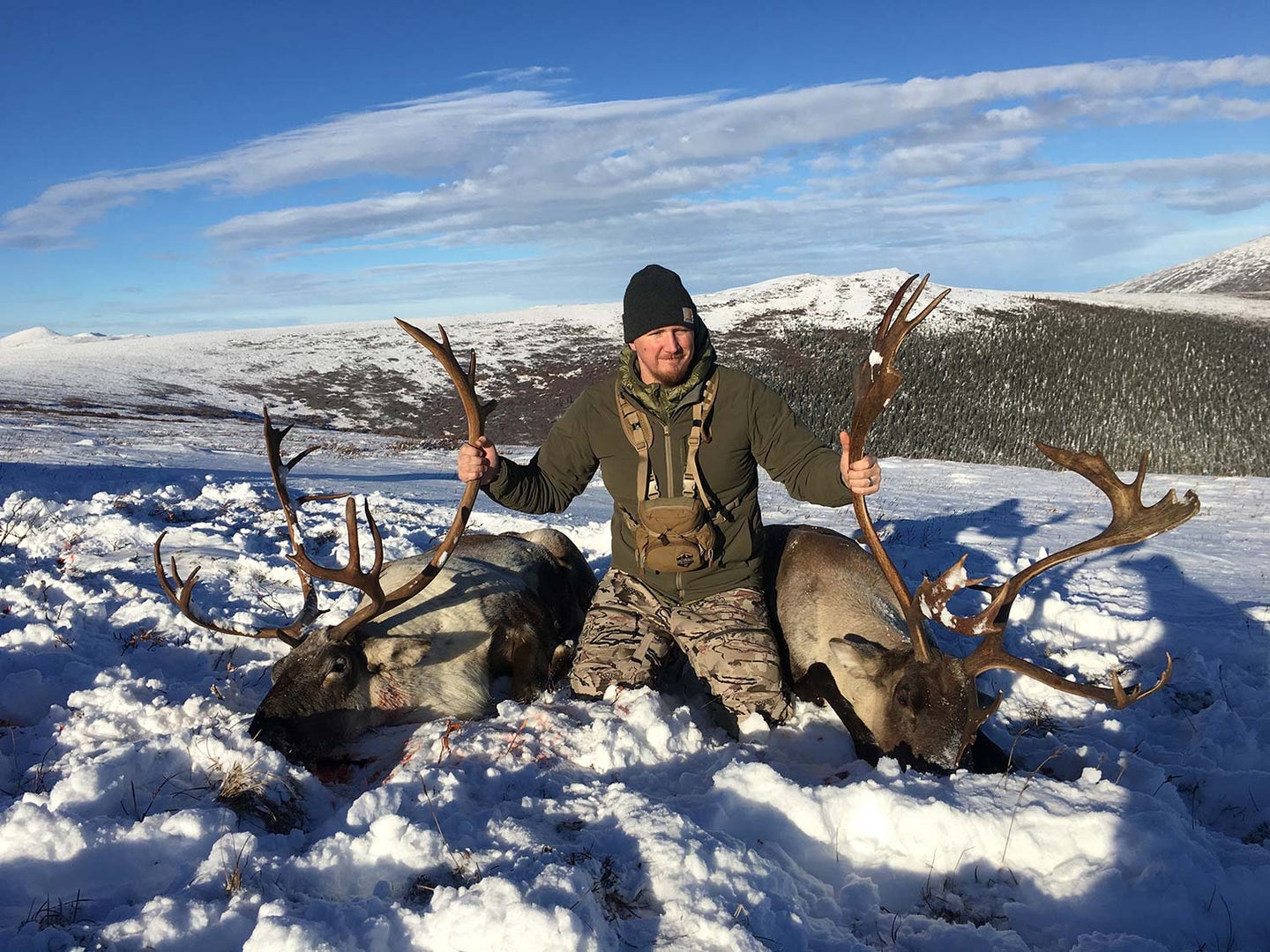 Hunting caribou is a smart choice for your first trip to Alaska. Tyler Freel
SHARE

The hunting opportunities in Alaska are as diverse as the people living here. And choosing the species to pursue on your first hunt in Alaska can be daunting, because there is such a variety of wild game to pick from.

Each hunter is different, and you have to decide what you want to get out of your first Alaskan hunt. There are no right or wrong answers, but there are specific things you need to consider in your planning, contemplation, and research.

Most folks will be looking at a DIY hunt (due to the expense of an outfitted hunt), so we need to eliminate the species that require a registered guide for non-residents. Dall sheep, mountain goats, and brown or grizzly bears are off the table. That leaves moose, caribou, black bear, Sitka blacktail deer, Roosevelt elk, and muskox.

You will need to consider factors like the type of hunt you want to do (i.e. drop camp, road system, hiking, floating, etc.) You’ll also need to consider the region you would like to hunt, the weapon you want to hunt with, the availability of tags, and the level of logistical complication that you are willing to deal with to not only go on the hunt, but to get your meat, cape, and antlers back home. There is a lot of nuance to each person’s decision, but when considering all factors, I think that caribou are generally the best first animal to hunt in Alaska, and here’s why.

Everyone has different tastes, but most agree hunting caribou is a good starting point for Alaskan hunts. Of course there are several other great options, but all of them have some downfalls. Alaska-Yukon moose are right at the top of the list for someone coming to hunt Alaska for the first time, but their sheer size can easily create problems for hunters just dipping their toes into Alaska. A good bull is roughly twice the size of the biggest Rocky Mountain elk you’ll find. They are a pain to work on, a fact often worsened by the rugged country you will shoot them in. They are tough to dress, butcher, pack, expensive to fly out, and difficult to get home without spoiling the meat if you don’t have a comprehensive and well thought-out plan.

Alaska’s Roosevelt elk will present the same problems, and there are much easier ways to get one in the Lower 48. Black bears are a fantastic option for a first Alaskan hunt, especially if you want a coastal hunt, but as far as interior hunts go, you can get the same experience in lots of other places.

Sitka blacktails are considered by many to be the best first Alaskan hunt, as they are typically plentiful, easy to deal with after killed, and are some of the most affordable big game to pursue in Alaska. They might be the best choice for you, but overall, you’re limited to the coast and islands. You’ll have a little more flexibility in location choice with caribou. Non-residents can hunt muskox without a guide legally, but tags are hard to come by and logistics are costly and complicated.

Caribou may not be the most iconic Alaskan animal, but just about anyone who dreams of hunting Alaska has caribou on their radar. It’s hard to argue that a big caribou bull isn’t one of the most handsome and majestic animals in Alaska, and they are also among the most widespread hoofed animal here. The magnitude of their numbers at times is something most Lower 48 hunters can only dream of. In addition to their intrinsic allure as an Alaskan game animal, their dispersion makes them attractive to a wide variety of experience-seekers. You can find them on the Arctic Slope, north of the Brooks Range, to the brushy, treeless hills of northwestern Alaska, through various parts of the interior, and on the Alaska peninsula. You can even hunt them on Kodiak Island and several of the Aleutian islands if you’re wanting a coastal experience.

In addition to being a handsome trophy, a caribou is just about the right size. A big bull is between the size of a large mule deer and an elk—big enough to give you a bounty of meat without being a major hassle to butcher and pack out. Walking a few extra miles or shooting one in an inconvenient spot isn’t nearly the dealbreaker that it is with moose, and that gives you more flexibility on your hunt.

Outside of the rut, caribou meat is fantastic tablefare as well. It is a lean, mild-flavored meat that will compete with any venison. Early season is generally best, in August and early September, especially before they shed their velvet. Once caribou hit the rut, the meat of bulls can be completely inedible, so keep that in mind in your planning.

The caribou’s dispersion across such a wide variety of terrains also makes them huntable in an array of styles. In August, they can be hunted in the mountains out of a backpack. You can also try float hunts, drop camp hunts, road-system hunts, walk-ins, and ATV hunts. You can hunt in the mountains, on ridgelines, river bottoms, in hills, and flats. In a nutshell, no matter your preferred method, you can find a caribou hunt to suit you.

You may be overwhelmed with the options when you’re planning your hunt, but once you decide the general region or style of hunt you want to have, you can start contacting charter services, and the Alaska Department of Fish and Game is a great resource as well, both on their website and by contacting their regional offices.

When you’re in the caribou, they are everywhere, but when they’re gone, they’re gone. You definitely want to avoid missing the migration if you’re traveling here, so timing and location is everything with caribou (but that can be said for just about any Alaskan game). There aren’t animals behind every bush up here, and there’s always a chance you can strike out for one reason or another with any species. But get in the right place at the right time and magic can happen. There are some draw and more limited areas for caribou, but plenty of over-the-counter opportunities are available for a non-resident hunter.

Regardless of your hunt style, your hunt will likely be a combination of ambush and spot-and-stalk hunting. You’ll generally be set up waiting for caribou moving through, often posted at a good vantage point to glass. Once a bull you want is spotted, you’re going to want to get in front him and let him come to you. You can sometimes sneak to within range of unsuspecting caribou, but rest assured that if they are at a walking pace, you won’t be able to keep up with them. The classic folly is the hunter who tries to catch up to caribou headed in the other direction. It’s not going to happen.

You don’t need to fret about caliber for your caribou hunt, your deer rifle will work just fine. They have a reputation of being tough, but a single well-placed shot will get the job done. Anything from a .243 up through a .300 Win. Mag. with bullets that will hold together will serve you well on even the biggest caribou bull.

All things considered, caribou will likely give you the best combination of opportunity, variety of hunt options, and an iconic Alaskan experience for any newbie wanting to hunt the Great Land.