4 Key References for Judging the Size of Black Bears

_ show a big, mature boar with a sow. You can see the differences in head and body structure as... 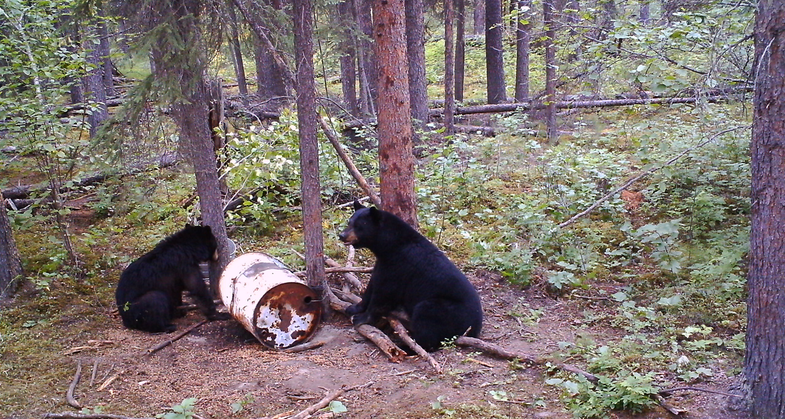 _ show a big, mature boar with a sow. You can see the differences in head and body structure as well as the hair. The sow is rubbed in several spots._

Here in Alaska and many other places, spring bear season is underway. I’m burning with anticipation this spring as it’s been a busy winter, and I never did connect with a black bear I felt was worth shooting last year. I did try to get the big one you see in these pictures, but never was able to get a shot. Needless to say, I’ve been looking over a lot of old trail cam photos and daydreaming about the season to come.

Black bears can be notoriously tough to field judge for size, trophy quality, and gender. It does take looking at quite a few bears to get the hang of it, but it can still be tricky. I’ve had bears that had significant ground shrinkage, as well as a few that were bigger than I initially thought. There are a few basic things you can look for that will help out when you’re in the field.

1. Size Reference
This is more applicable to hunting over bait than spot-and-stalk, but having something of known size near the bear can help give you an idea of just how big a bear is. A lot of folks use a limbo pole, bait drum, or post driven in the ground to judge how tall a bear is at the shoulder. General rule of thumb for black bears is a bear that stands 36 inches tall at the shoulder will square 6 feet or better. You’ll likely have to depend on the other items on the checklist if you aren’t hunting over bait. It can be very difficult to accurately size up a bear when you have no reference tools.

2. Body Structure and Cadence
A bear’s physique can clue you in on both size and gender. Typically sows and young boars are lanky in appearance, with small paws and thin wrists in comparison to the rest of their body. A big mature boar will typically have big, thick front shoulders and legs, a lower belly, and look much more “blobby” in appearance. A really big bear will also tend to sway as they walk. It’s more like a waddle than the careful tenderfooting that sows and young bears do.

3. Head Profile
Another good way to judge gender and size is the head. Sows and young boars typically have a more pointy nose, and their ears appear bigger than on an old boar. This probably isn’t true everywhere, but at least on the “black” black bears we have around here, the sides of a sow’s muzzle are almost always much more pale than a boar’s nose. Nine times out of 10, if I notice the bear’s muzzle is very light colored, it’s a sow. A big boar will have a blockier head, and usually a much darker muzzle with a thick neck, and his ears will appear to be positioned more on the side of his head.

4. Hair
Unless you’re hunting only for the meat, you want to pay attention to the hair quality of the bear you’re watching. Most people have heard of bears that are “rubbed,” and most of us have an idea of what that means, but it doesn’t necessarily mean that the hair is worn off down to the skin. A lot of sows and younger bears have longer hair, and will often “rub” in spots like the belly, butt, elbows, and neck. Many times only the guard hair will be rubbed off, leaving the underfur exposed. On brown-colored bears, it’s harder to notice, but it will show up in your rug or mount. On black-colored bears, look for spots in these areas that appear brown.

Also, hair length can tell you more about the class of black bear you’re looking at. Typically, big mature boars will have shorter, but more even, thick hair. It appears slick, while sows and younger bears will usually have much longer hair and a more shaggy appearance. If you’re looking at a bear that looks like Chewbacca, you’re probably not looking at an old boar.

I’m sure I’m not the only one excited for spring bear, it’s one of my favorite times to be out in the woods, and hopefully this spring will be an exciting one for you too!