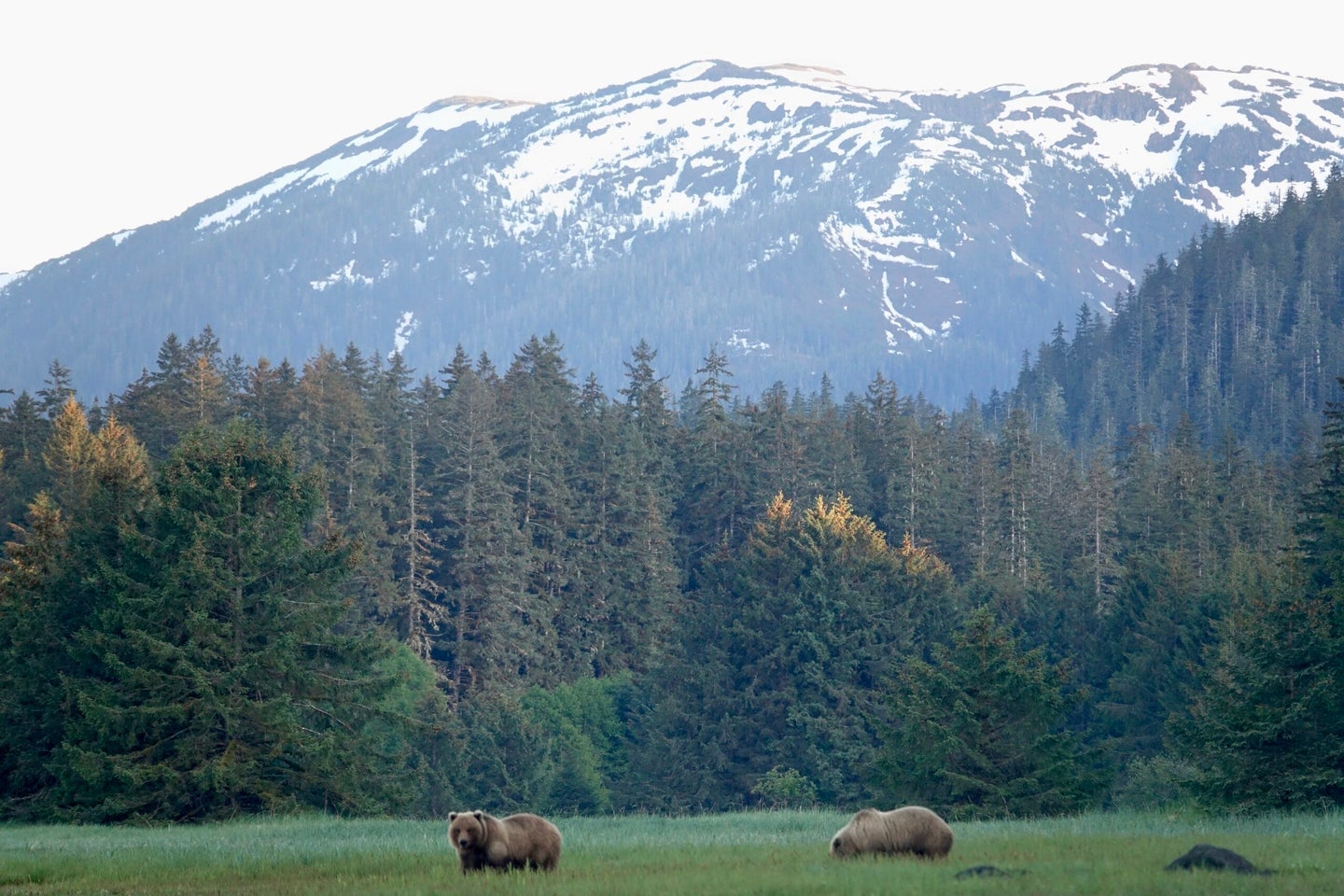 Brown bears in an intact watershed on Chichagof Island in the Tongass National Forest. This watershed could be targeted for clearcut logging if the Forest Service repeals the Roadless Rule. Bjorn Dihlel
SHARE

Last week, the Forest Service announced in its Final Environmental Impact Statement that it planned to axe the Roadless Rule in Southeast Alaska’s Tongass National Forest. The agency’s decision comes after President Trump, with the encouragement of Alaska’s governor and Congressional delegation, asked USDA Secretary Sonny Perdue to exempt the Tongass from the Rule in August of 2019. The reason, Trump made clear, is to lift logging restrictions in the 25,560 square mile national forest — America’s largest.

What is the Roadless Rule?

The Roadless Rule was established in 2001 and prohibits old-growth logging and the building of new logging roads in 58.5 million acres of national forest across the country. That’s about 2 percent of the continental U.S., and, according to the Forest Service’s website, “provides many social and ecological benefits.” In the Tongass, the heavily subsidized logging industry collapsed due to lack of profitability before 2001. But by then, a significant portion, some sources estimate around half, of the Tongass’ productive old-growth forest had been clear-cut. The Rule protects about 9 million acres in the Tongass, including the the majority of the region’s remaining productive old growth which amounts to a small percent of the total acreage safeguarded. According to the Forest Service, repealing the Rule would open up 168,000 acres of old-growth forests that were previously protected. This consists of most of the biggest and oldest trees, and some of the most ecologically important, left in the Tongass. There’s a strong possibility that after repealing the Rule, the Forest Service’s next step will be to revise its 2016 Tongass forest plan to open up even more old growth to clearcutting and new roads.

The main argument for repealing the Roadless Rule is the idea that it’s stifling economic development. Senator Lisa Murkowski exemplified this belief in an op-ed for the Washington Post.

“Many Alaskans believe the roadless rule should never have been applied to our state because of the uncertainty and barriers it imposes. It works against common-sense projects such as renewable hydropower—raising costs, extending approval timelines and causing some projects to be nixed altogether,” Murkowski wrote.

But this hasn’t played out on the ground. The Rule does allow exceptions for hydroelectric projects, mines, and community interties—in fact, each of the 57 projects applied for in the Tongass has been permitted.

What Does It Mean for Hunters, Anglers, and Industry?

While President Theodore Roosevelt was in office, he watched as bison, elk, and brown bears vanished from the lower 48. Meanwhile, he recognized that Southeast Alaska offered unparalleled opportunities for hunters, fishermen, and adventurers. He even went so far as trying, unsuccessfully, to turn a significant section of Southeast Alaska into a brown bear preserve. During his last years serving as president, he signed the Tongass National Forest into existence. Today, the Tongass is still a paradise for outdoorsmen and women. People come from around the world to fish for all five species of wild Alaska salmon, hunt everything from mountain goats to brown bears, and experience primeval wild country. The Tongass offers both the fulfillment of a trip of a lifetime and a nostalgic experience of what America once was. These hunting and fishing opportunities all depend on healthy habitat—in which old growth forest is paramount—to support the Tongass’ rich ecosystem. Intact habitat supports commercial fishing and tourism (including hunting and sport fishing), which make up the lion’s share of Southeast Alaska’s economy, contributing more than $2 billion per year on average.

Old-growth forests here provide different ecological benefits than old-growth timber does in the lower 48 (where logging is often helpful to wildlife). In the Tongass, stands of ancient trees provide wintering habitat for deer and are critical for stream health and spawning habitat. Plus, this is a rainforest (it rains more than 220 days out of the year in Juneau and Ketchikan, Alaska, receives about 140 inches of rain per year) so wildfires aren’t a major issue the way they are in the rest of the country.

The timber industry has a long history of losing money in Southeast Alaska, and it’s clear to folks on either side of the issue that we’ll never see the economic logging boom from decades ago even if the Roadless Rule is repealed. Taxpayers for Common Sense reported that “From 2008 through 2013, the U.S. Forest Service spent $139.1 million on timber sales (including road construction) in the Tongass and received $8.6 million in proceeds from these sales, a net loss of $130.5 million.” The reason logging loses money is that the Forest Service pays to construct new roads, and maintain old ones, utilized by the timber industry to log public lands.

There will be no regional economic boom by rolling back the Roadless Rule—instead, taxpayers will be paying to deforest the Tongass. It gets even worse. The majority of the Tongass’ logs are exported raw to China. The irony is that repealing the Roadless Rule will benefit China while doing little for Southeast Alaska’s economy.

What are Alaskan’s Saying About It?

The Forest Service’s decision comes in direct opposition to the wants and needs of the majority of Southeast Alaskans. A statewide poll conducted by Trout Unlimited showed that “79 percent of Alaskans (and the same percentage of Southeast Alaskans) prefer either keeping the Roadless Rule in place without change or making limited changes that include new protections for important fish and wildlife areas. Only 11 percent of statewide voters and 17 percent of Southeast Alaska voters prefer a full exemption.”

During the Forest Service’s public comment period, 96 percent of commenters testified they wanted to keep the Roadless Rule in place. One of the main reasons for keeping the Rule, cited by commenters, is that the Tongass is the world’s largest temperate rainforest and acts as a carbon sink to offset climate change. Last July, nine Southeast Alaskan Native Tribes filed a petition to the U.S. Department of Agriculture to stop the removal of protections from the Tongass. Two other tribes have since also signed on.

“Living a subsistence lifestyle is more than gathering food—it encompasses our values, traditions, our culture,” Heather Douville, who lives on Prince of Wales Island in the southern region of the Tongass and has been hunting, fishing, and gathering since she was a small child. “It is part of who we are. Indigenous people, who have lived sustainably on these lands for tens of thousands of years, should be making these decisions (not the Forest Service). Protecting the old growth is essential for our ecosystem and one of our best resources for fighting the climate crisis. It is what we rely on for our food sources and our Haa Kusteeyi “our way of life.”

Douville is Tlingit and her people have called Southeast Alaska home since time immemorial. She knows firsthand how important old growth forest is for everything from salmon to deer to people. Heather gave the first buck she killed this fall to her Naan—her adopted Haida grandmother. She made a promise to her Naan’s dying son that she would always take care of his mother, and that her Naan would never be hungry.

Elsa Sebastian, a lifelong Alaskan commercial fisherman and conservationist, grew up in a tiny fishing village on the north side of Prince of Wales Island. She points out that her island is “only 135 miles long, and already has 2,500 miles of logging roads.” She saw the collapse of the timber industry and says that clear-cut logging the remaining old growth forest will be an economic and environmental disaster.

“Salmon are my connection to the Tongass,” Sebastian says. “There are millions of fish that spawn here every year—these are rainforest salmon and they need those big trees to hold the streambanks stable and cool the water that they spawn in. Industrial logging has impacted salmon habitat in the Tongass; there are hundreds of miles of damaged salmon streams that need to be restored. Habitat damage is an external cost of the logging industry, and restoration will only happen as a further expense to taxpayers. It’s absurd that the Forest Service is opening more lands to logging before they restore all of the streams that have already been degraded by the timber industry.”

Most Southeast Alaskans are not inherently opposed to logging. Most people here would like to see a sustainable and responsible logging industry that focuses on second growth and utilizes the thousands of miles of logging roads that already exist in the Tongass. They just don’t want to see roadless old growth forest clear-cut.

Gordon Chew and his son, Sterling, own and run Tenakee Logging Company on Chichagof Island. The Chews got into the logging business because they’re builders and shipwrights and it was too expensive to bring up timber from Washington. Gordon believes repealing the Roadless Rule and a resurgence of clear-cut logging will be disastrous to Southeast Alaska. He also believes that there can be a sustainable logging industry in the Tongass. It just has to be done in a way that’s more about the overall forest than a corporation’s bottom line. The Chews focus on young growth and are having great results. Gordon points out that selectively cutting one out of three old growth trees can be a good thing by opening up more light, but he’s adamant that clear-cutting should no longer be allowed in Alaska.

“We live here. Because we do a lot of subsistence fishing and hunting, the last thing we want to do is damage the environment,” Gordon said.

Everyone from bear hunting guides to Native elders to tour operators to commercial fishermen have all said that repealing the Roadless Rule will negatively affect their lives.

“A lot of us who live in the Tongass know how rare and special it is,” Douville says. “That’s why we pour our heart and soul into engaging with public process; that’s why we try to communicate to the Forest Service what it means to live here, to hunt, and fish here. But it’s just been painfully obvious that this decision isn’t about the people who live here or what’s best for the forest. It’s just industry for the sake of industry.”

The Forest Service has 30 days before issuing the Record of Decision and making the decision binding. If this happens, the Trump administration will be able to propose timber and road projects, possibly as soon as the end of the year. This is a massive step in the wrong direction and endangers a truly unique place and its public hunting and fishing opportunities. To get involved, contact your senators and representative in Congress and tell them the Tongass old growth forest is more valuable left standing for future generations’ fishing and hunting heritage.

Bjorn Dihle is a lifelong resident of the Tongass National Forest. You can follow him at instagram.com/bjorndihle/ or facebook.com/BjornDihleauthor/