The Case for Squirrel Hunting, and Why It’s Completely Underrated 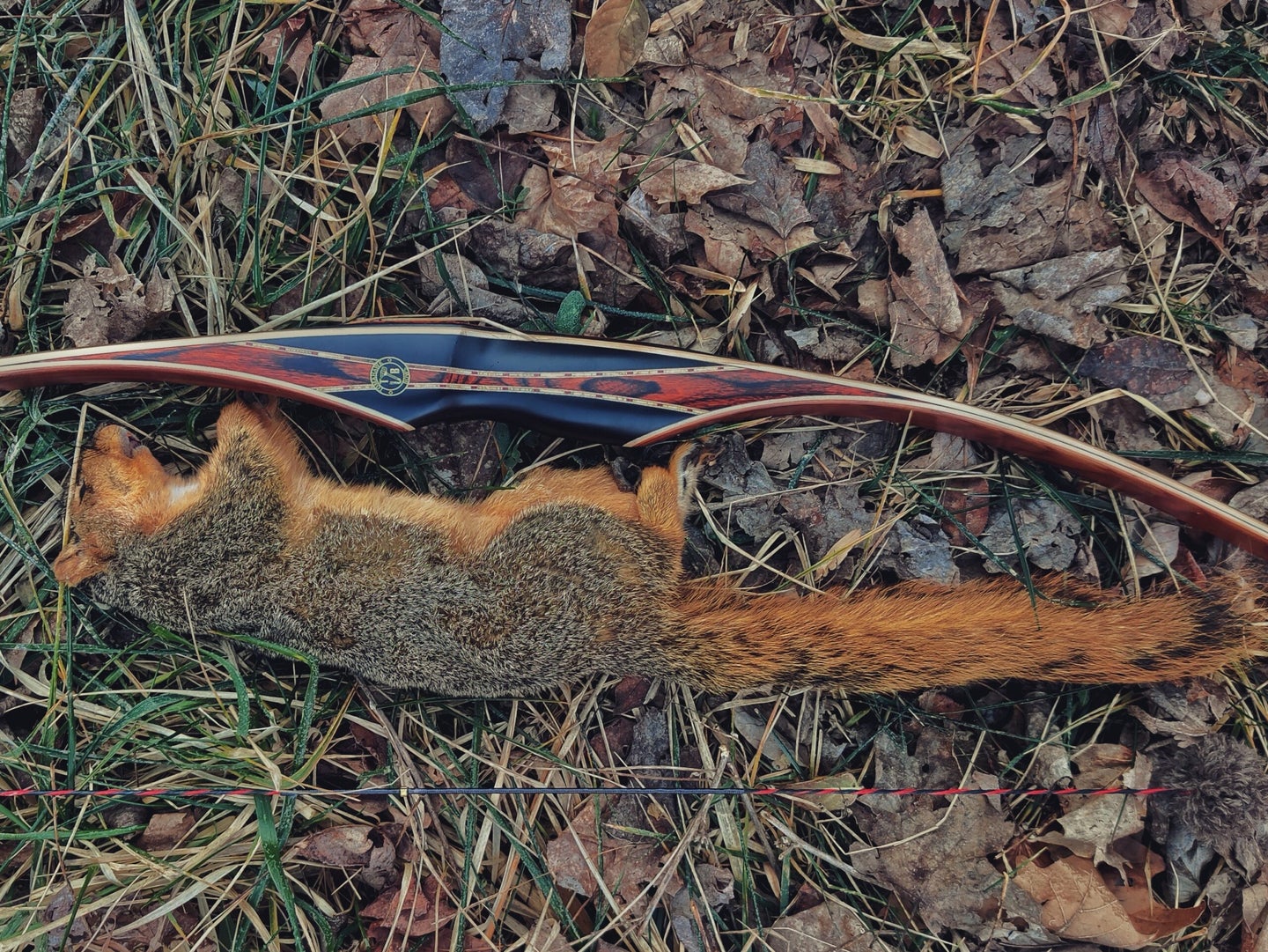 Bowhunting squirrels is a good way to break up a slow bowseason. Beka Garris
SHARE

The air was so cold that my eyes watered. Snow hung heavy on low-lying branches and blanketed the ground, muffling the sound of my footsteps as I made my way through the hardwoods. Late deer season in Ohio can be pretty uneventful, and although I still had a deer tag burning a hole in my backpack, I was concentrating on squirrels. After weeks of struggling to even see a deer during gun season, I was all about bagging something.

I spotted a flash of gray, a flick of a tail. Only 15 yards away, perched on a hemlock branch, was a fat gray squirrel. I felt my jacket bunch around my elbow as I drew my bow and released an arrow. It met its mark, and the squirrel tumbled, all but disappearing into the fluffy snow.

Success. That’s what it was. Going home with something to throw in the Crockpot is always a good feeling. And sometimes, especially when deer season gets tough, it’s good to just get out and shoot some game.

I grew up hunting squirrels, and still enjoy it every year. Hunting squirrels, however, doesn’t seem to be very popular. Small game in general tends to be overlooked for other larger, more glamorous game. And indeed, the available data confirms it. According to a 2016 national survey by the U.S. Fish and Wildlife Service, 70 percent of the 11.5 million U.S. hunters in 2016 said they hunted deer. A scant 13 percent—only 1.5 million people—hunted squirrels.

Extremely underrated though squirrels may be, hunting them is just plain fun for beginners and experienced hunters alike. It’s not as difficult, expensive, or as time consuming as hunting big game, and once you find a few honey holes, you’ll find countless opportunities to get out and shoot a few bushy tails.

Here’s why squirrel hunting is actually one of the greatest hunting opportunities we have.

For starters, most states are pretty lenient about what you can hunt squirrels with. Shotgun, rifle, or bow? It’s up to you. This also means most folks won’t be limited if they only own one of those. Hunting with a shotgun is probably the easiest choice for newer folks, as it will be a bit harder to miss with one.

Using a rifle chambered in .22LR is not only fun, but it’s also good marksmanship practice for when newer or young hunters move on to bigger game. Plus, it makes it easier to pick the squirrels off with a head shot. This results in less meat being damaged, which is always good, as squirrels are small to begin with.

A bow is my weapon of choice, simply because I love bowhunting. It’s a challenge of course, but worth it, and much quieter. An arrow is less likely to alert nearby squirrels than the crack of a rifle or a shotgun blast. Just make sure to bring plenty of arrows along though, as I’ve lost many in the squirrel woods.

It costs very little to hunt squirrels. A resident small game license is usually a small price to pay and, aside from any ammo you need, you’re pretty much set. You don’t need any special hunting gear, or expensive camo, or even any game calls. Wearing the latest and greatest camo certainly won’t improve your chances of shooting a few squirrels, just as wearing blue jeans and a hoodie won’t hurt them.

You also don’t need a lot of land to successfully squirrel hunt, or even private land. In fact, I’m not certain that I have shot any squirrels on private land in my 20 years of hunting. Since squirrel hunters are few and far between these days, even a small tract of public land can be your best bet for a successful hunt.

The fact that you don’t need lots or specialized hunting gear for squirrels makes it the ideal candidate for a spontaneous hunt. I seldom plan on squirrel hunting…it just happens. Have an extra hour in the middle of the day? Grab your shotgun and get after it.

While early mornings and right before dusk are the best times to hunt squirrels, you can still hunt at midday and kill your limit. There’s no reason to set your alarm for 4:30 a.m. unless you want to, which means it can fit into any hunter’s schedule. Plus, seasons are long, which means you can pick and choose the best days and weather to hunt. Here in Ohio, squirrel season opens the first of September every year (although in some states squirrel season is open year-round), which means it arrives a full month before deer hunters are in the woods.

Read Next: The Ultimate Guide to Hunting Squirrels

Tactics for Any Style

There are many different methods to hunt squirrels, and no single right way to do it. If you like staying in one spot, you can camp out at the base of a tree and wait for the squirrels to come calling. My brothers and I often spent an hour or so sitting at the base of a big oak tree, waiting for a squirrel to stick its head around the trunk and give us a shot. Patience is something you will need plenty of, and so is humility, when you learn that a squirrel can outwait you nine times out of ten. Squirrel hunting is also suitable for more restless folks, and kids. If you like to stay on the move, walking and stopping to listen occasionally works fine.

Besides, finding squirrels isn’t like scouting and patterning deer. A squirrel’s main food source generally consists of some type of nut, so if you find an area that has hickory, walnut, or oak trees, you’ll find the squirrels.

Odds of Success Are High

Unlike with deer hunting, where a missed animal or wounded animal can feel like complete failure (or turn a newbie off to hunting for good), squirrels are low stakes for new and young hunters. It’s also a low-key way for seasoned hunters to get out in the woods—or have some fun during a frustrating deer season—and for older hunters to stay in the game. If you bust or miss one, try again or move along. If you make even one good shot, you’ll have meat to bring home.

Read Next: A Good Squirrel Hunt Will Prepare You for a Lifetime of Hunting Bigger Game

Squirrel hunting will help you hone your sense of hearing, and attune your eyes to small movements. Being aware of sound and movement is key to being a good hunter—no matter the game you’re hunting.

It Can Be Social…Or Not

Squirrel hunting is one of the few types of hunting that I enjoy doing with other people. It’s a great way to introduce new hunters or non-hunters to hunting, and it’s great for all ages. I packed my daughter along on squirrel hunts when she was just a year old with excellent success—she even carried our lone squirrel back to the truck herself.

As if you needed any more reasons to go squirrel hunting, squirrels are extremely good to eat—when cooked properly. Honestly, this is probably my favorite reason to squirrel hunt, because I enjoy cooking.

Read Next: How to Skin and Butcher a Squirrel in 9 Steps

When it comes to preparing squirrels, cooking them low and slow is definitely the way to go. As long as you follow this rule, it doesn’t matter if it’s baked, grilled, smoked, fried, or thrown in the crockpot. Squirrels tend to be tough, so simply breading and frying them in hot oil doesn’t usually result in a desirable texture. Take your time, though, and the end result is absolutely delicious.

If at all possible, let your squirrels brine in salt water over night. Simply fill a bowl with warm water and add a few teaspoons of salt. Mix until the salt is dissolved, then add the squirrel meat and cover. Let it sit in the refrigerator overnight. When you’re ready to make your dish, simply remove the squirrels from the salt water, rinse well and pat dry with a paper towel. Set aside and proceed with the recipe. If you don’t have time, simply rinse your squirrels well and proceed.

Your squirrels should be divided into five sections: both back legs, both front legs, and the body section. If there are any pieces that are too damaged from shot, simply cut the damaged part away or discard if needed.

Season squirrel meat with salt and pepper. In a large frying pan, add enough oil to lightly coat the bottom of the pan. Turn the burner to medium high, and wait for your oil to heat up.

Add your onion, mushrooms, and garlic and cook a few minutes until fragrant and mushrooms are cooked through. Remove from pan and set aside.

Add your squirrel pieces to the pan and let them sear to a golden brown, turning once. If you need to add a little more oil, feel free—just wait for it to heat up before adding the squirrel. Do this in batches if needed. Don’t worry about cooking the meat through, you’re just trying to get a good color on the outside of the meat to add flavor.

Place the squirrel, mushrooms, and cooked onion in the bottom of a baking dish. Distribute evenly.

In a large mixing bowl, add the cream of mushroom soup, sour cream, and milk and salt and pepper to taste. Mix well. Pour over the squirrel. Sprinkle the top with some parmesan cheese and cover the baking dish with foil.

Cook at 325 degrees for 1 hour. Serve over egg noodles, and sprinkle with fresh parsley before serving.

Beka Garris is a freelance writer who resides in Southern Ohio with her husband and daughter. A hunter since age 10, Garris also enjoys bowfishing, gardening, and foraging. She is passionate about traditional bowhunting and enjoys taking her daughter along on every adventure.