How to Skin and Cut Up a Squirrel in 9 Steps

A quick and easy way to dress these little critters 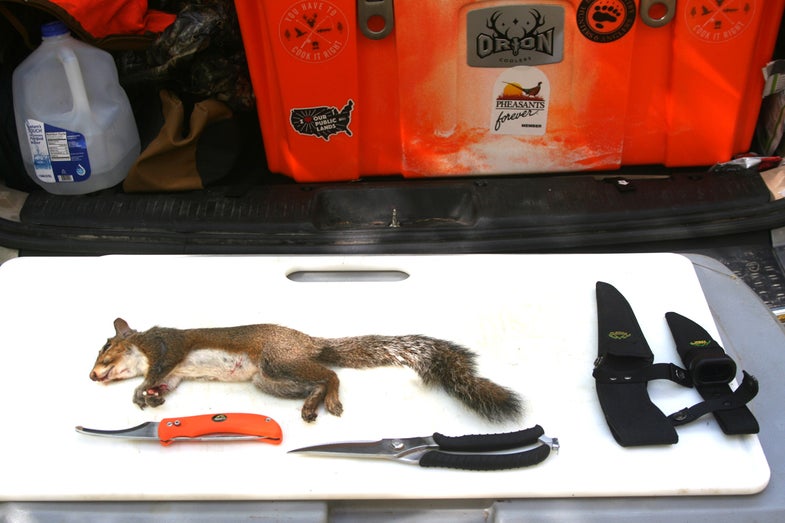 Tree rats. Roof rats. Nature’s little speed bumps. To some, squirrels are just annoying animals that make a lot of noise when you are out deer hunting. To me, they are some of the best eating and most fun to hunt animals out there. Now, I realize there’s nothing sexy about squirrel hunting. You aren’t going to see a squirrel head mounted above someone’s mantel. Squirrels do, however, offer a quick and sporting hunt that doesn’t take much special equipment—and you can find these critters most anywhere. I have often wondered if it would be possible to get a whole limit of seven squirrels if I spent the whole day out hunting for them. I came close a few weeks ago, and probably would have made my full limit if I had started earlier in the day. I went out at around 1 p.m. and stayed out until dark and managed six squirrels. I can’t help but think I would have gotten that seventh if I had been out there all day.

One of the criticisms that I hear about squirrel hunting is that it’s not worth the effort for such a small amount of meat. Last year I shot two fox squirrels, cleaned them then took all the meat off the bones and weighed it out just to see how much meat they hold. I was surprised to find that two squirrels provided 14 ounces of meat. That is almost a pound, and with a little know-how, can be made into squirrel and dumplings, which can feed a family of four with leftovers.

Here is my step-by-step method for cleaning squirrels. You will need a set of game shears for this, or a sharp knife. I like to use the shears and the Swing Blade from Outdoor Edge. It has a rounded tip on one of the blades that slides under the skin, and won’t puncture the squirrel.

Using your game shears make a small cut on the belly of the squirrel making sure that you don’t go too deep. You just want to cut the skin, and not go through the belly meat.

Using the game shears or the knife, make a cut all the way around the torso and just under the skin, still making sure not to puncture the internal cavity.

Once you get to this point, all the meat should still be intact (well, depending how you shot the squirrel). Also, if you clean each squirrel right after you shoot it, these critters are much easier to clean. This will also help them cool down and prevent spoilage. On hot days, I like to carry a gallon-sized baggie or two with some ice in them to help keep the meat cool.

Now that your squirrel is skinned, you can snip the legs, neck, and tail off. Using your game shears, cut at the joints right above the feet and at the base of the tail. Then cut through the neck and remove the head.

This next step can be done with a sharp knife, but again, I like to use my game shears. Insert the tip of the shears into the anus and make a cut through the pelvis all the way up to the neck.

With two fingers, grab hold of the heart, lungs and esophagus and pull down towards the tail. This will remove all the intestines and you should end up with a clean internal cavity.

I like to carry a small bottle of water with me just to give it a quick rinse before putting it into my bag. After I get them home I will give them a more complete rinse and, sometimes, depending on how bloody they are, I will soak them in a slightly salty brine over night to draw out some of that blood.

Read Next: The Best Way to Pluck a Wild Duck

If I’m lucky enough to kill several squirrels, I store them in my freezer, broken down just a little. I have found that the back legs are much meatier and easier to eat, so I like to cut them off at the hip joint and store them in a 1-quart plastic container. All you have to do is pour water on them until they are just submerged in the water and freeze them. As you shoot more squirrels throughout the season, you can add the legs and cover them with more water. Repeat this until you have enough legs to make some little fried drummies.

I will then put the torso meat (with the front legs attached) in another freezer bag, and use those for soups and stews. I have found that storing them this way makes it easier for me to cook them in different styles (and my kids just love buttermilk-fried squirrel legs).

This method of cleaning can be applied to most small game animals if you are not planning on using the pelts. I have done this with rabbits and woodchucks, and it works equally well.