How to Make Dandelion Jelly 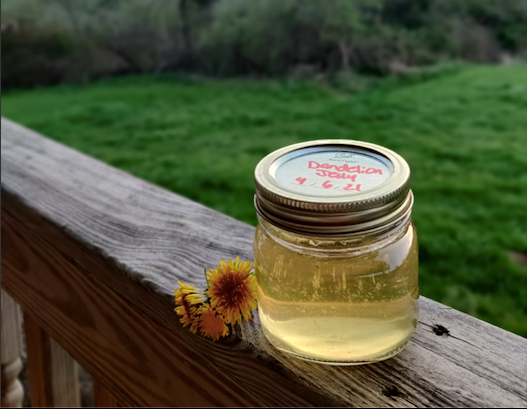 Make your dandelion jelly as soon as the flowers stat popping in your yard. Beka Garris
SHARE

Dandelions are one of the first signs that spring is around the corner. They pop up overnight, dotting lawns and fields with bright yellow tufts. That means it’s the ideal time make a batch of dandelion jelly. For years I have heard of dandelion jelly, and I finally decided to try making it. I rounded up my daughter, two of my sisters, and our mother to help me pick several hundred dandelions in the backyard. After following the process detailed below, we ended up with six jars of the most beautiful pale yellow jelly. It tastes like springtime: Similar to honey, with a delicate sweetness unlike any other jelly I’ve made.

The process is surprisingly simple. Even if you’re a beginner, I promise you can do it. You should collect dandelions in early spring, right when they first pop up, before pesticides have been sprayed and the lawn gets mowed. If you do want to make this jelly later in the year, be mindful of where you pick the dandelions—you don’t want any chemicals in your jelly.

The first step to making dandelion jelly is to remove all of the green from the flower petals. You’ll want to do this immediately after picking the dandelions, as they tend to wilt rather quickly. The green part of the flower will make your jelly bitter, so discard that and save the petals.

Once you have at least 2 cups of flower petals, you’re ready to make your dandelion tea.

Boil 4 cups of water in a large saucepan. Once it has come to a boil, add the flower petals and remove from heat. Stir the petals in the water a few times, then leave the pot until it cools to room temperature. Cover, and chill in the refrigerator for 24 hours.

After 24 hours, strain all of the dandelion petals from the water. I used a mesh strainer to scoop the petals out, then squeezed any remaining liquid back into the pot. If you miss a petal or two, don’t sweat it. At this point it will look a bit odd and smell like grass, which is normal.

Next, Make the Jelly

Put the pot of dandelion tea on the stove and add the pectin and lemon juice. Stir and bring the mixture to a boil.

Add the sugar, and bring the mixture back to a boil, stirring occasionally to dissolve. Once it comes to a boil, let it boil for two minutes. It will probably start foaming and rising to the top of the pot‚ but that’s fine. Just keep an eye on it, and consider using a large pot, which will prevent it from boiling over.

Read Next: How to Start Canning at Home

Once you have boiled the mixture for two minutes, remove it from the heat and skim as much of the white foam off as possible and discard.

If you want to simply keep your jelly in the refrigerator, spoon the jelly into your jars, store in the fridge and eat it this season. If you would like your jelly to be shelf stable, you can do a hot water bath canning.

Seal Your Jars in a Hot Water Bath

First, bring a large stock pot of water to a boil. As it heats, ladle your jelly into your sterilized jars, leaving ¼-inch of room. Wipe the rims of the jars, then add the seal, and screw the rings on snuggly. Don’t over-tighten, or you won’t get a proper seal.

Next, carefully place your jars into the boiling water bath. Leave it in the boiling water for 10 minutes before removing. Place the hot jars on a towel and leave undisturbed for 24 hours. If the lids seal, they will be shelf stable for a year. If any lids don’t seal properly, just store those jars in the refrigerator. Some jars may not seal properly, and you should eat the jelly from those jars first.

Making this jelly is a fairly simple process as long as you can find enough dandelions, and a great way to get your entire family outdoors after a winter of hibernation. Plus, it’s a fun way to introduce your children to canning, which will make them more self-sufficient in the years to come.