The group of seven subsistence hunters called in for help on Oct. 28, received supply drops, and were rescued by helicopter a week later 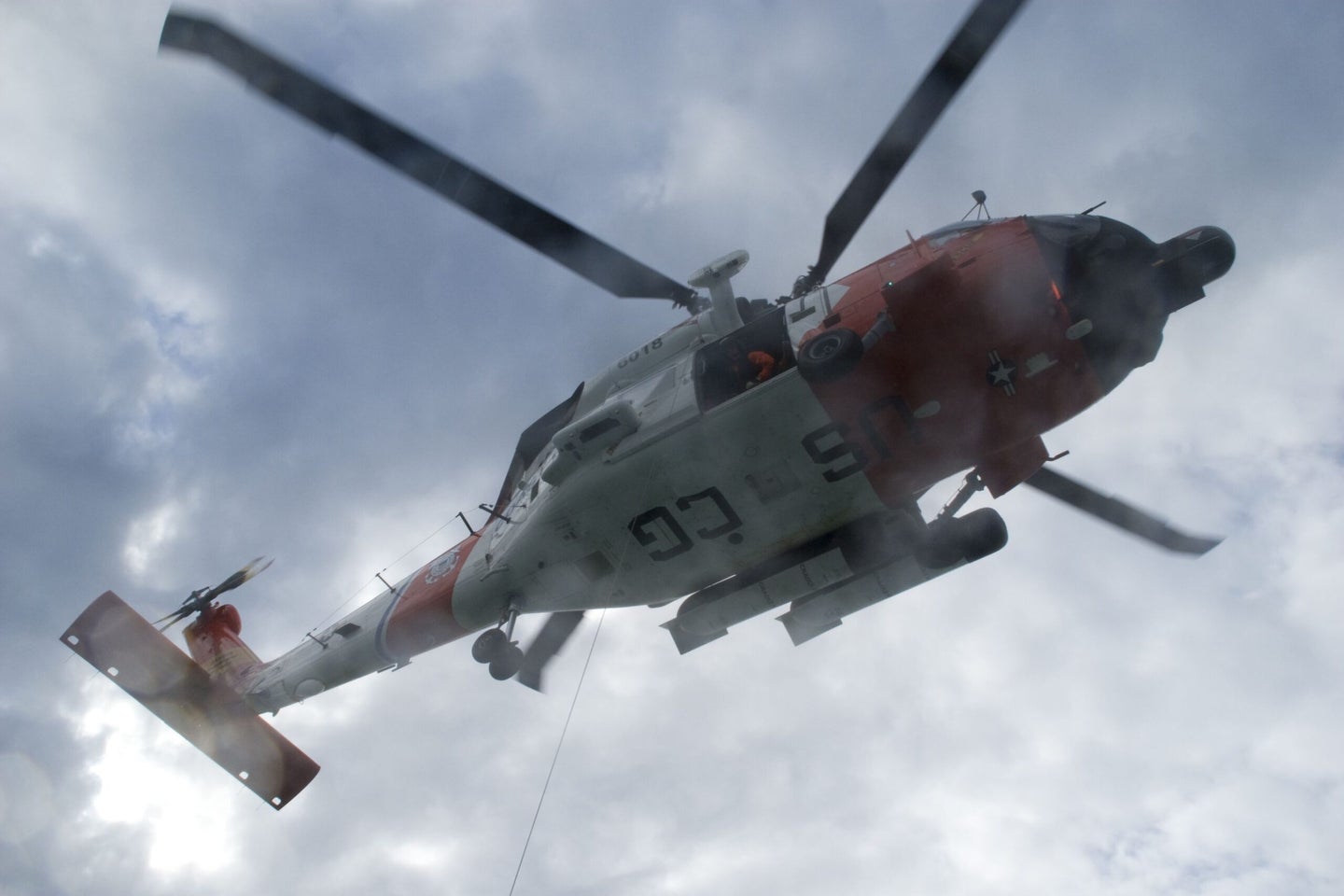 The belly of a USCG helicopter was a welcome sight for hunters who were stranded for a week when the Yukon River froze unexpectedly. Wes Shinn / USCG
SHARE

The U.S. Coast Guard rescued a group of seven hunters on Nov. 4 from a remote fish camp about 20 miles east of Emmonak on the Yukon River. The Coast Guard’s MH-60 Jayhawk was a welcome sight for the group of hunters, who had been stranded at the fish camp and awaiting rescue for about a week.

The group of subsistence hunters, which included six adults and one teenager, were on a whale hunt, and they originally left their home in the village of Pilot Station on Monday, Oct. 25. According to Alaska’s KTUU, their goal was to return with whale meat for residents of the village, which has a year-round population of approximately 573 people.

Over the next few days, the boat worked its way down the Yukon River as temperatures dropped and conditions deteriorated. The Yukon had already begun to freeze over by the second day of their trip; that evening, one of the hunters used the group’s inReach device to send a message to his wife.

“On Tuesday my husband called and said it was going to be slow because there was lots of ice,” Trina Paul told KTUU. “On Wednesday I got a short message saying they were going to try to make it home slowly. By Thursday, they had called for help—which is not something that they would typically do.”

By that Thursday, Oct. 28, the group had gotten off the iced-up river and taken shelter at a small fish camp on a branch of the Yukon, which is located more than 50 river miles upstream from where the river spills into the Bering Sea. Alaska State Troopers were advised of the situation by about 5:15 p.m. the following day.

AirSta Kodiak C-130 drops supplies to stranded hunting party in Emmonak prior to their rescue Thursday night.
An aircrew on an MH-60 Jayhawk helo, hoisted and transported the hunting party, 6 adults and 1 teen, to awaiting EMS in Nome. @AKStateTroopers pic.twitter.com/UKAkKSWhCo

AST Communications Director Austin McDaniel explains that the agency “is responsible for all inland search and rescue operations that occur in Alaska,” but that it often relies on assistance from volunteer search and rescue organizations, local police departments, and military resources such as the USCG and the U.S. Army. McDaniel tells Outdoor Life that the agency immediately began coordinating with local, private air carriers in order to charter a helicopter flight to rescue the hunters. He says that a combination of “poor weather and a lack of pilot availability prevented them from extracting the group” over the next few days.

Meanwhile, the hunters were relying on some of the dry food that was left behind at the summer fishing camp and had begun melting ice for drinking water. On Sunday, Oct. 31, with their supplies dwindling, AST received some assistance from private air charter Grant Air and were able to make a supply drop with food and medications.

Rex Nick, one of the hunters, told KTUU that the group eventually became frustrated by what they saw as unnecessary delays by the Troopers and Coast Guard. He said that they were told repeatedly that a plane or helicopter would arrive, only to be disappointed day after day.

“Why did they wait for five or six days to finally get somebody out there?” Nick said. “It’s like, ‘the plane will be there, the chopper will be there,’ and it never showed up… We got to the point where we didn’t really care if they showed up, because it’s not exciting anymore. We’d hear planes fly, hear them coming close by, and we didn’t even bother to go and look at the sky to see if they were coming or not.”

The USCG chopper reached the remote fish camp on Nov. 4, and USCG search-and-rescue personnel scooped up the group around 8:40 p.m. The helicopter then returned to the base in Nome, where all seven hunters arrived safe and without any apparent injuries.

Captain Mike Frawley is the Incident Management Chief for the USCG’s 17th District, and he emphasizes the effect that weather had on the timeline of the rescue mission, as well as the importance of protecting search-and-rescue personnel in these scenarios.

“It sounded like a very challenging weather situation, and there was freezing fog over most of Western Alaska,” Frawley says about the days leading up to the helicopter rescue. “We just didn’t feel that the weather was cooperating enough to where we were willing to risk the lives of the air crew—especially considering that the hunters were in shelter, and had food and water.”

“That crew went above and beyond in my opinion,” Frawley says. “Based on the weather reports, and the updates that the Troopers were sending out, I think that was a heck of a mission.”

This story has been updated to include comments from the USCG.