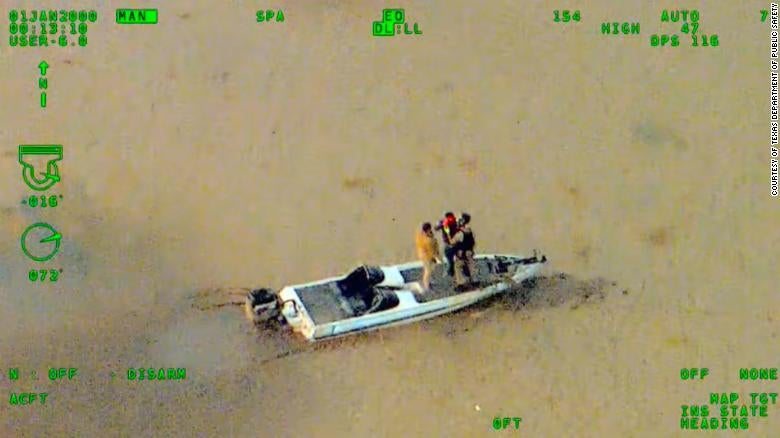 A view from the helicopter that rescued two Texas anglers. Texas Department of Public Safety
SHARE

Three blasts on a whistle kept Texas anglers Bart Giles and Stevie Rodriguez from spending the night in their boat after it became stuck in a sandbar on the river portion of Lake Amistad, a 65,000-acre lake that straddles the U.S.-Mexico border.

The two men were on their way to a fishing tournament in early December when they came upon a capsized canoe. Giles turned his boat around to see if there was a person in the water or the nearby shore that needed help. But when he went back, his own boat ran aground and stuck in the sandbar.

“We were supposed to be fishing in a tournament that day,” Giles told KENS5, a news station in San Antonio. “We were running up the river, and it’s a route I’ve taken a bunch of times … Just all of the sudden the water dropped. In that early morning light it looked like water all the way across there, so when I went to turn around, it was just mud.”

Neither of the men had cell service to call for help. Giles got out of the boat to see if he could make it to shore, but immediately sunk to his chest in mud. The only tool he had was a whistle. He blew it three times to signal for help. The men heard a dog barking and hoped there was a human nearby. A man on the Mexico side of the river appeared. The good Samaritan was able to get to higher ground for cell service, and called in the emergency.

Three hours passed before Texas Game Wardens arrived on the scene, who were faced with a new dilemma: They couldn’t pull the boat from the mud. The wardens called the Department of Public Safety to send a rescue helicopter, but all those craft were all out for maintenance. Dallas and Houston were the closest hubs that might send help, but it was getting dark. At last, the San Antonio Police Department stepped up and sent their own chopper.

“By the time the call came out, the day was getting short and daylight was running out,” said Garret Hunter, chief certified flight instructor for SAPD helicopter detail.

A group of three men, including a DPS diver, made the 1 hour, 20 minute flight from San Antonio to Lake Amistad. Once they arrived, it only took about 15 minutes to send down a rope, and hoist the two men safely to shore.

“They gave me the thumbs up that they were okay and that’s all the contact we had with them,” said helicopter pilot and crew chief Roy Rodriguez.

Read Next: Why Even the Most Bad-Ass Outdoorsmen Need a Life Jacket

Giles was able to recover the boat, which belonged to his late grandmother.

“They had no idea how long they were going to be there, and so once they saw us fly over, they realized that their day was coming to an end,” said Sgt. Steve Tippett, the DPS diver who was part of the three-man rescue team. “They were they were glad to see us show up.”