Survival Skills: How to Build an Atlatl Spear

If you’re not familiar with the word atl-atl, it’s an ancient Aztec word for spear thrower. Also called a woomera... 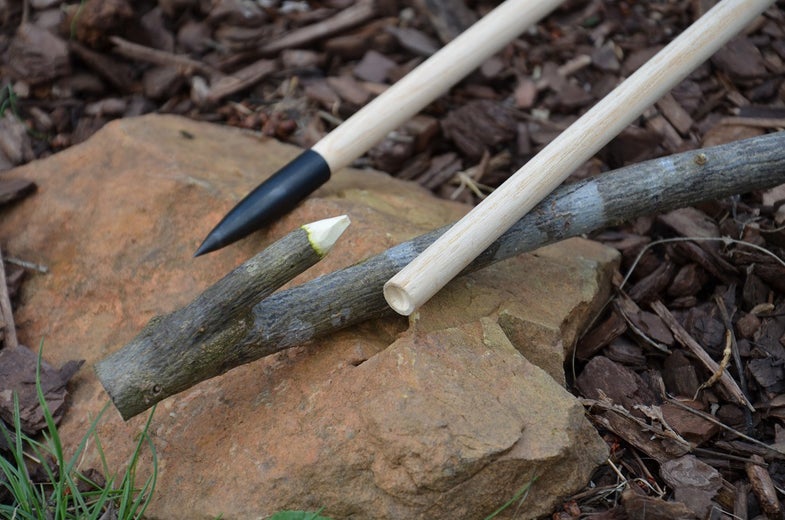 A primitive hunting implement, the atl-atl is easily made at home. Tim MacWelch
SHARE

If you’re not familiar with the word atl-atl, it’s an ancient Aztec word for spear thrower. Also called a woomera in Australia and by other names across the globe—this hunting tool has been used since the Middle Paleolithic times.

The atlatl is a spear-throwing set that can launch a small spear (dart) more than 100 yards. Traditional cultures have used these weapons on big game, small game, fish, and each other. But don’t think that this tool is relegated to the history books. Dart speeds up to 93 mph (150 km/h) have been recorded with modern examples of this primordial weapon. And thanks to avid and vocal atlatl users, the Missouri Conservation Commission approved the atlatl as a legal method of taking game and non-game fish species in 2007. With a good deal of practice, it’s surprisingly accurate to distances up to 20 yards, it’s also surprisingly easy to make. Here’s how.

Select a small hardwood branch about 18 to 24 inches long, with a small side branch. Cut off most of the side branch, but leave part of it sticking up as a pointed hook. Next, drill a small “cup” shaped depression in the end of a fletched dart. Three or four fletchings will help to stabilize its flight. This thin spear should range from 4 to 9 feet in length and be about a ½ inch in diameter.

When you are ready to throw, place the cup of the dart onto the hook of the thrower, pinch the dart with your thumb and index finger, and hold the thrower tight with your other three fingers. Move the thrower forward quickly and release your “pinch grip” to throw the dart.

Want to learn more about the atl-atl? Check out worldatlatl.org.