The Best New Crossbows of 2018, Tested

We ranked and reviewed these 11 new hunting crossbows

A few years ago, we’d never have dreamed that the number of new crossbows would exceed the number of new compound bows in our test, but we live in a world of ever-expanding crossbow-hunting opportunities. While advances in compound bow design are fairly minor, crossbow technology is changing fast. Last year’s radically different (and exorbitantly priced) Ravin R15—which was the winner of both Outdoor Life’s Editor’s Choice and Field & Stream’s Best of the Best awards—changed what many hunters expected of a high-end crossbow. The competition took note, as is evidenced by more than a few similarities to the Ravin among the top crossbows of 2018.

TenPoint produces some of the best crossbows on the market, and the Stealth NXT is its most impressive yet. It finished at or near the top in our three double-­weighted categories: handling and balance, speed and power, and accuracy. The Stealth is just 6 inches wide when cocked and weighs 7.3 pounds without accessories. It shoulders and handles nicely. Moreover, with the supplied 449-grain finished bolts, we got 392 fps out of it and averaged 1.06-inch groups at 30 yards. “This crossbow is an investment, but a good one,” says senior editor Natalie Krebs. “It’s easy to cock, shoots tight groups at hunting ranges, and handles well.” Our only complaint: Its trigger, while light enough at 3 pounds 15 ounces, was a bit sloppy.

Various accessory packages are available. Our test bow included the AcuDraw System, bolts, a quiver, an EVO-X scope, and TenPoint’s new Stag hard case, which is about the most innovative case on the market.

We affectionately called the R10 the “budget Ravin.” It’s a downsized and simplified version of last year’s winning R15, with a few key modifications. The first Ravins had passive safety buttons that hardly moved when disengaged—I was a little paranoid of the system while hunting and found myself constantly checking to see if the safety was on or off. The one on this bow is very positive and much improved. While the R10 does give up some speed due to a shorter power stroke, it is still the second-fastest of the test. But 30-yard groups averaged 1.38 inches—near the bottom of the accuracy pack.

The Sub-1 has a radical new design and was perhaps the most anticipated crossbow of 2018. Despite its chronograph performance (at 346 fps, it was the second-slowest bow of the test), the Sub-1 excelled in about every other category—­particularly accuracy, where it tied with the Barnett as the best shooter of the test. All shooters on the test panel averaged, well, sub-1-inch groups with the bow. There is a crank-style ­cocking device available called the Removable Silent Draw, but we preferred the simple rope with hooks. Thanks to the Sub‑1’s Sync‑X cams, the bow has a unique draw cycle with 80 percent let-off; cocking it feels like drawing a vertical compound. That and the Benchmark Fire Control system make this bow easier to decock than any crossbow I’ve used. 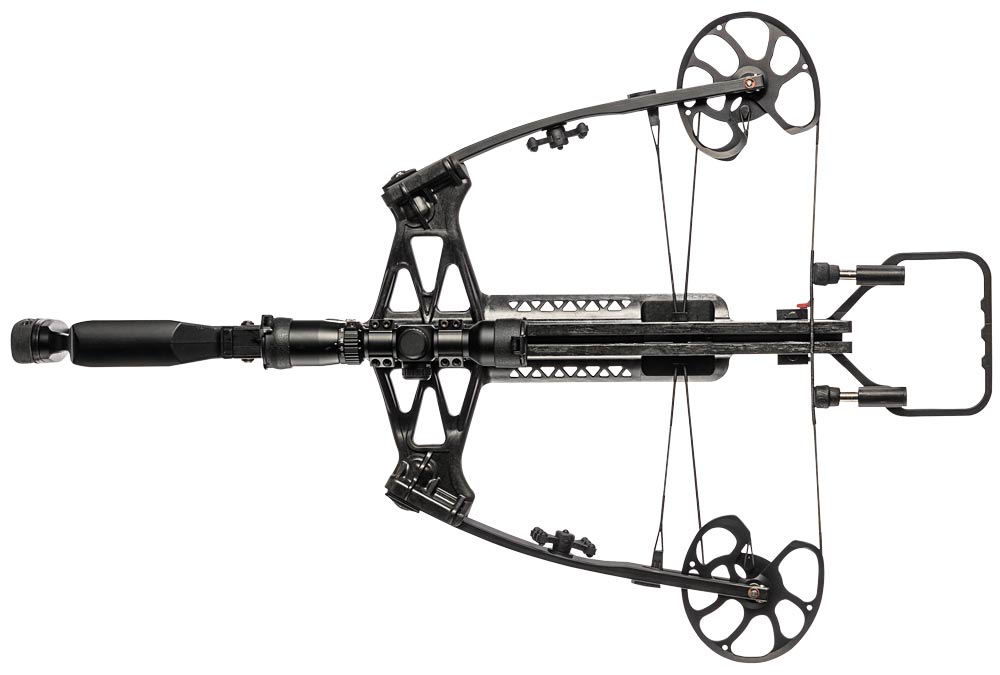 Scorpyd was the company that pioneered reverse-limb crossbows, and it still makes the best ones, as far as I’m concerned. Though it seems to be named for an ’80s-movie villain, the Deathstalker is one freakin’ good crossbow. It’s bulky but still lightweight (6.2 pounds), and it is one of the best-balanced bows in the test. It lost some ground in ­cocking effort—the long power stroke makes it a chore—but it’s an excellent shooter (1.06-inch groups) with plenty of power. If I owned one, I’d dress it up with a pair of pimpin’ 1911 pistol grip panels, since the bow is designed to accept them. 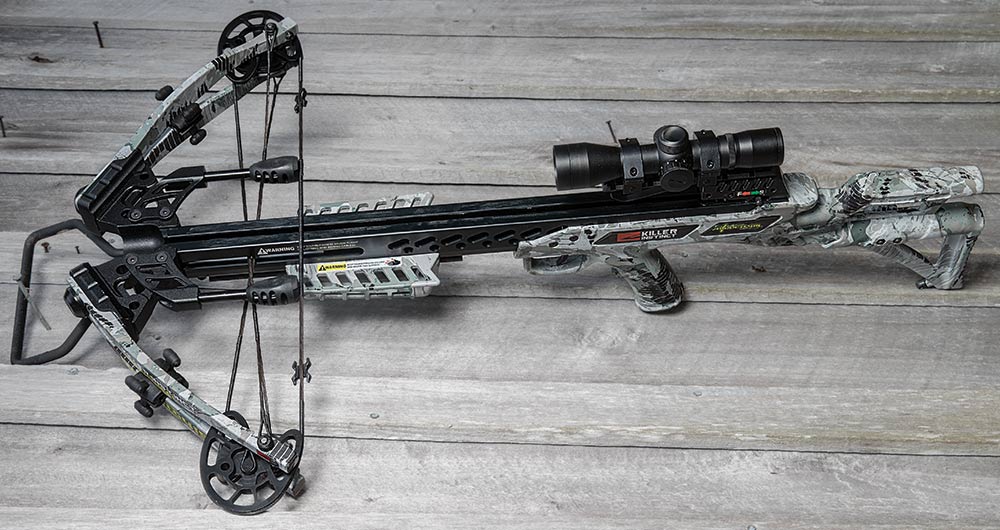 Killer Instinct excels at making value-packed crossbows. The Ripper 415 is a homely thing, and its 200-pound limbs and 15-inch power stroke made it rather difficult to cock. The 2-pound 6-ounce trigger wasn’t great, and it lost fit-and-finish points. But our complaints stop there. This was the fastest, hardest-hitting crossbow in our test. We averaged 1.13-inch groups with it, making it one of the better shooters of the test too. Best of all, this bow costs $180 less than the nearest competition, and you could buy four of them for the price of either of the top two finishers. Perhaps you need a crossbow for every member of your family. Or perhaps you’re on a budget and don’t care one bit what your crossbow looks like because you don’t intend for the deer to see it anyway. Either way, this is the crossbow for you.

Another solid, conventional compound crossbow design for the money, the Whitetail Hunter Pro STR is a heck of a shooter, tying with the Mission for most accurate bow of the test with 0.69-inch average groups. At 388 fps, it was the fourth-fastest bow in the test. The included crank-style cocking device malfunctioned beyond repair (so badly, we had to cut it and use a conventional rope), and for that we docked it several points in both safety and cocking effort.

The Invader X4 won’t win a horsepower contest, but it’s not designed to. Instead, this is a few-frills hunting rig on a well-­established compound design. Ours clocked 326 fps with a 437-grain aluminum bolt, putting it near the bottom of the pack in the speed and power category. It had a decent trigger and produced 1.13-inch groups. Cocking it was a breeze, and the bow had a better fit and finish and overall quality feel than the others in its price range. 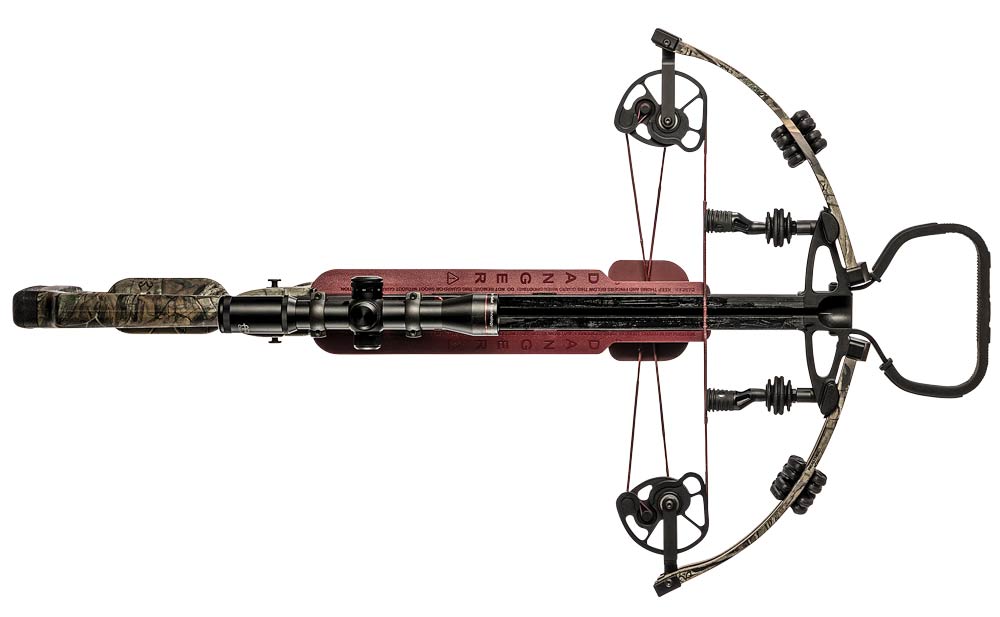 The debut bow from CamX performed well across the board but didn’t score any especially high marks. The most interesting feature is the Swing Arm technology, which places the cams inside the limb system and, according to CamX, makes the bow more durable. The trigger was crisp, and we averaged 1.31-inch groups. It had an excellent scope. At 378 fps with a 388-grain bolt, speed and power rankings were middle of the pack. It’s nice-looking, save for the “trigger guard” that actually covers the entire pistol grip of the bow (for which we couldn’t find a redeeming purpose). 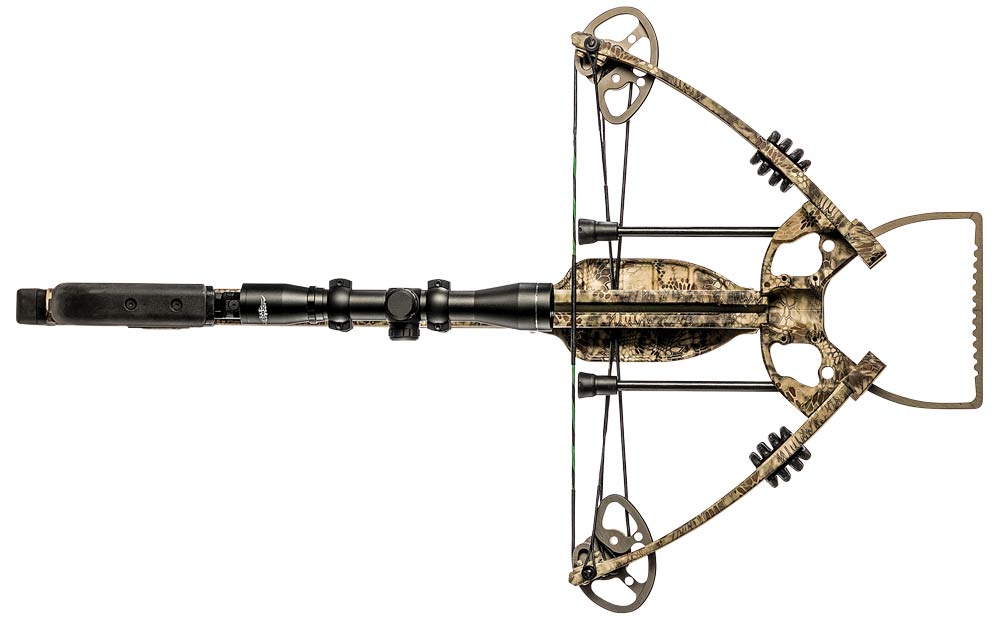 Darton has built some excellent crossbows in years past, but the Toxin 125 SS—the latest of the company’s bullpup designs—was not a test-panel favorite. While we did appreciate the handling and compact design, this one, like most bullpups, puts your cheek (and, in my case, whiskers) uncomfortably close to the string. For that, we docked safety points. The included scope was one of the worst optics I’ve ever seen, and the bow was at the bottom of the pack for accuracy, with 1.56-inch groups, and the second-slowest bow of the test.

On the Range: Gear to Go

You can’t conduct a bow test without good arrows and targets. For the hunting-­spec bows, we used Victory Archery Products’ RIP TKO Elite arrows in 350 spine, cut to 28 inches and weighing 380 grains. These have been my hunting arrows of choice for several seasons. IBO-spec arrows were VAP VForce Elites cut to 30 inches and weighing 350 grains. Targets were 26-inch Signature/Competition Series Rinehart bags and 18-inch Rinehart X-Bow bags.

We ranked and reviewed these eight new compound hunting bows

How We Test Crossbows

Speed was checked with a chronograph with factory-­provided bolts and field points, which were also weighed so we could calculate kinetic energy. ­Accuracy was measured by averaging three 3-shot groups from each tester, taken at 30 yards from a Lead Sled. ­Cocking ­effort was subjective but easy—is the bow a pain to cock or not? Triggers were weighed on a Lyman ­trigger scale and ­subjectively judged for creep and travel. For safety evaluations, we considered such things as whether the bow’s safety mechanism automatically engages when cocked, and if the design requires some part of your body (hand, foot, face) to be in a position it shouldn’t be in while you’re loading or shooting.

Accuracy, speed and kinetic energy, and handling and balance are the key measures of a crossbow’s utility to a hunter, so those categories were double-weighted. What about noise? After years of crossbow testing with decibel meters, we’ve determined that, compared to vertical compounds, all crossbows are so loud that the difference between them is moot for hunters.