10 Times We Thought Hunting Was Doomed 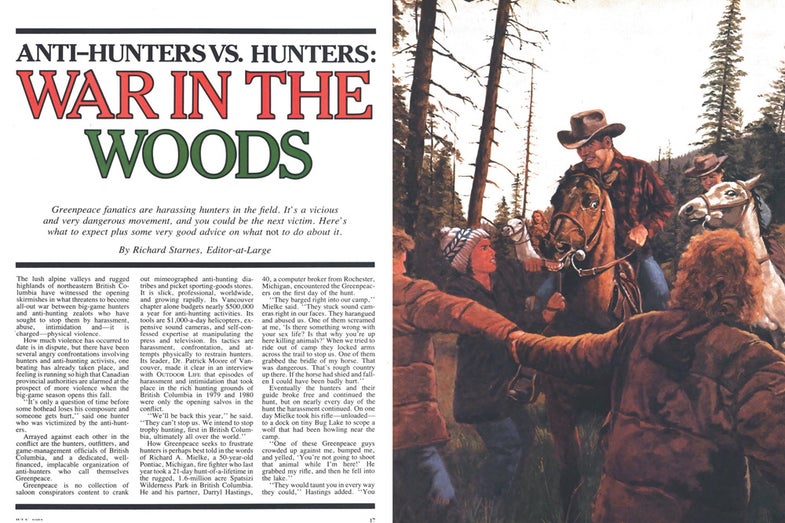 We’ve warned our readers about the end of hunting a hundred times in the past 120 years. See The Boomer Bomb.) But we weren’t just crying wolf: Hunting has faced many legitimate threats over the decades, which have ranged from too-liberal regulations and poor resource management to habitat loss and anti-hunting activism. But we reported on those issues to help raise awareness and troubleshoot our thorniest problems—like advocating for a reduction in daily duck bag limits in the ’20s and ’30s. And in most cases, the outcome wasn’t so grim after all. Here’s a look back at some of the gravest pronouncements from the pages of Outdoor Life.

“The Future of American Game”

January 1921
The decline in the amount of game in America gives us a gloomy prospect for the shooting of the future. Our open seasons will grow shorter, our bag limits smaller, and finally the only good shooting will be held by rich men’s clubs. That is what we fear, but it is not an inevitable future. —W.S. Davenport

“The Need of Reduction in Bag Limits”

July 1924
Season closed indefinitely on grouse; no more quail shooting till 1930; pheasants put on protected list for the next five years; doves taken out of game-bird class! These are but a few of the “acts” which state legislatures find necessary to impose from year to year, brought about as a result of overshooting—big bag limits and long open seasons. By the time indifferent state game departments awaken to a sense of realization that something must be done, and succeed in getting slow-acting lawmakers to enact needed regulations, hunters will have so reduced the supply of certain species that there will be nothing left to do but put them on the “closed” list for a term of years, if these species are to be saved from extermination. Due to the present system of game administration, there is a tendency to “go the limit” while game lasts, then cut out the hunting entirely. How much more satisfactory it would be if we were more conservative with bag limits while there is game to shoot, instead of depriving ourselves of one or more kinds of sport each time the legislature meets? I would rather be permitted to hunt three species of game on a small bag limit during my lifetime than I would to hunt one species during the few years it lasts on a big bag limit and then hang up my gun for all time. Wouldn’t you? —Neil W. Northey, Associate Editor

January 1940
The bighorns have become so scarce that they are protected over most of their range, and that decrease continues at an appalling rate. The U.S. Forest Service’s estimate of the number of mountain sheep in 1921 was nearly 14,000; its 1938 count was less than 8,500! —William M. Rush

December 1941
Game wardens to whom I have talked seem utterly discouraged over their attempts to stop night hunting. The reason is not that the marauders cannot be caught: but, having caught them, in many states it is almost impossible to secure a conviction. One of the best wardens I know recently said to me, “I just don’t bother with it any more. My last seven arrests resulted in acquittals.” —Archibald Rutledge

June 1972
It’s time the hunters of America woke up and asked themselves some hard questions. Is their sport doomed? Is the NRA justified in warning that hunting may become extinct in a few more years? Is this generation the last that will enjoy the privilege of going afield to take a legitimate harvest of the annual wildlife crop? Will a hard core of fanatics resorting to misrepresentation and outright falsehood succeed in convincing the majority of Americans, who know little or nothing about hunting, that it is cruel and destructive and that the hunter is the arch enemy of all game? Will it be television that deals the final blow? —Ben East

“End of Your Duck Hunting?”

January 1975
There’s a fair chance that by next fall, waterfowl hunting will be banned in America. The reason is that anti-hunters seem to have found an effective new weapon that sportsmen unintentionally placed in their hands. On October 18, 1974, in Newark, New Jersey, four anti-hunting groups petitioned U.S. District Court Judge Frederick B. Lacey to issue an immediate ban on duck hunting through the country. A week later the U.S. Department of the Interior and the anti-hunting groups reached an agreement and the suit was dropped. But the anti-hunters are sure to try the same tactic again. Even the agreement that led to the dropping of the suit stands as a concession to anti-hunters that may turn the tide against hunting everywhere, and against the survival of all species of wildlife—game and nongame alike. —Bill Vogt

“No Room for Ducks”

November 1978
All duck hunters will be severely affected if the degradation of the Canadian “duck factory” [nesting grounds] continues. A truly national disaster will affect us all, unless much is done, starting right now. —Bill Burton

“Anti-Hunters vs. Hunters: War in the Woods”

July 1981
Greenpeace fanatics are harassing hunters in the field. It’s a vicious and very dangerous movement, and you could be the next victim. Here’s what to expect, plus some very good advice on what not to do about it. Greenpeace is no collection of saloon conspirators content to crank out mimeographed anti-hunting diatribes and p icket sporting-goods stores. It is slick, professional, worldwide, and growing rapidly. Its Vancouver chapter alone budgets nearly $500,000 a year for anti-hunting activities. Its tools are $1,000-a-day helicopters, expensive sound cameras, and self-confessed expertise at manipulating the press and television. Its tactics are harassment, confrontation, and attempts physically to restrain hunters. “We’ll be back this year,” [their leader] said. “They can’t stop us. We intend to stop trophy hunting, first in British Columbia, ultimately all over the world.” —Richard Starnes, Editor-at-Large

December 1987
Last year, the world population grew by 83 million, to about five billion. As more people demand more land and water for food and fiber production, living space, transportation, and economic expansion, wildlife habitat is the odd man out. The evidence of pressures on wildlife habitat resulting from human population increases is everywhere. In the U.S., intensive agriculture reportedly destroys more than 300,000 acres of wetlands every year (about 80 percent of the total annual loss). Topsoil on America’s farmland is eroding at an average rate of 12 tons per acre per year, with losses up to hundreds of tons in some situations. —Lonnie Williamson, Editor-at-Large

July 1992
“It is the intention and desire of the people of Arizona to make our public lands safe and humane for all creatures found on Arizona’s public lands. We desire to manage our wildlife and protect our property by humane and non-lethal methods.”

These are the words of an Arizona animal-rights initiative (referendum) known as Proposition 200, and the analogy to a death knell is no mere rhetoric. In the opinion of many experts, approval of this initiative by voters on November 3 this year could indeed spell the death of all hunting, fishing, and trapping in Arizona, and eventually in many other states, as well. —Warner Shedd