4 Lessons We Learned on a DIY Hog Hunt 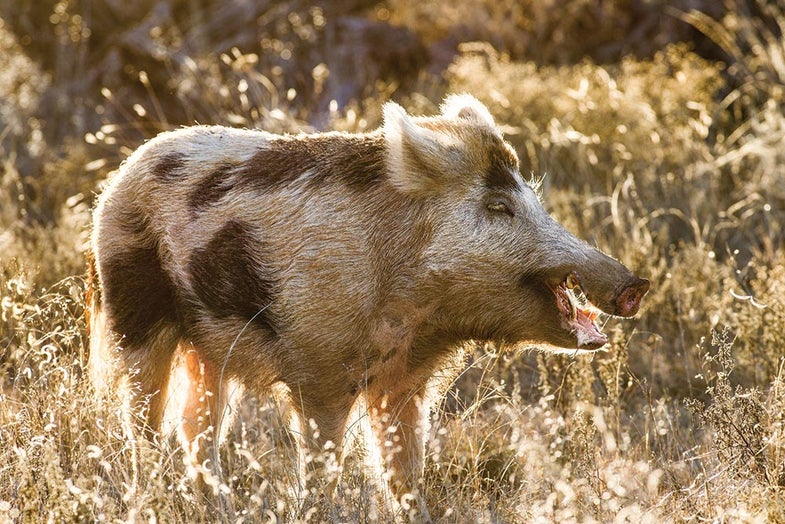 Oklahoma is overrun with wild pigs in all colors and sizes, like this spotted boar. Russell Graves
SHARE

You may have been fooled by the same trickery that we were. You’ve heard that most of America’s heartland south of Interstate 70 has been taken over by feral pigs, and that landowners would be grateful if you’d come shoot them.

That was the siren song that lured six of us Montana deer hunters into a Suburban last March and informed our decision to tow an enclosed trailer containing an upright freezer, a generator, folding tables, coolers, cutting boards, and more all the way to Oklahoma. Our intention: to convert marauding pigs into pork to feed our families and break the monotony of venison.

We figured we’d be greeted, if not as conquering heroes, at least as a welcome and inexpensive solution to the vexing problem of invasive hogs, which cause untold millions in agricultural damage every year. Commercial hog eradication can cost hundreds of dollars per animal. We’d be doing everyone a favor, we figured, by taking a few hogs off the land, and would scratch our big-game-hunting itch at the same time.

Plus, the pigs provided the impetus to take a road trip my buddies had talked about for years. We are a motley crew—a school superintendent, a pair of cellular-tower construction foremen, a bank-branch manager, a state fish-hatchery worker, and an outdoor writer—with varied reasons for hitting the road. For some of us, it was an opportunity to extend our fellowship beyond our little community in northeast Montana. For others, it was a chance to hunt a new species. For me, it was an experiment. Are hogs unwanted vermin or valued game animals?

As it turned out—this will surprise no one who lives in and hunts America’s Hog Belt—the reality on the ground was mighty different from our expectations. Here’s what you need to know if you act on the same impulse we did and put ­together a DIY feral-pig hunt.

Because I had hunted deer on northern Oklahoma’s Chain Ranch in the past, and knew the sprawling property held plenty of hogs, it seemed like a good place to start our wild-pork quest. The Chain is like many large ranches that host commercial-hunting operations in that it considers hog hunting a minor-league version of its deer-hunting enterprise. That means they charge hunters for the privilege of removing rapacious pigs from their property.

We sent the Chain a deposit of $100 per person, and agreed to pay $200 a day per person. In return, we got hunting access and the run of a manufactured home.

When we arrived, we learned the kicker: Every hog killed would cost us an additional $100. When you have to shell out a Benjamin every time you pull the trigger, you get pretty selective. The problem—if you can call it a problem—was that we had an overabundance of targets. The Chain runs a trap line of feeders that distribute corn twice a day to deer, wild pigs, and any other critters looking for a high-fructose handout. Chain Ranch guides delivered us to box blinds overlooking the feeders, drove away, and returned after dark. If money hadn’t been a limiting factor, we could ‘ve stacked up a couple dozen porkers. Instead, our group killed five hogs, ranging in size from little 30-pound sucklings to 200-pounders.

To a person, we were surprised at the experience. For a group of spot-and-stalk hunters, the blinds were constraining. Then there was the fence. It turned out that the “pasture” we hunted was a 500-acre high-fence pen in which wild hogs trapped from the wider ranch were released to maximize success for the Chain’s paying hunters. When we realized the situation, we agreed to move on after our single hunt on the property.

**Lesson Learned:* Expect to pay as much as $500 a day for outfitted hog hunting, and ask specific questions about hunting arrangements.

MAKE FRIENDS WITH THE LOCALS

Our next stop was 150 miles down the road at Jeff Puckett’s house. A former Norman, Oklahoma, police officer, Puckett is now a public-relations account supervisor for several outdoor brands. I’ve known him for years, and when I told him about our road trip, he invited us to stay with him and hunt his friend Mike’s property in southeastern Oklahoma.

The highlight of our trip was hunting Mike’s overgrown farm, a mix of hardwoods and fescue pastures in former Cherokee Indian territory. Mike showed us to his blinds—many overlooking feeders­—and left us to hunt our way. “Shoot every pig you see,” he told us.

And we did, mostly. Ky missed a behemoth boar—Mike estimated it weighed 600 pounds—while Ed killed an eater-size yearling with his .458 SOCOM. Ryan and I saw a few, but they were moving too fast to get a shot. Walking back through the woods at lunchtime, Ryan and I spooked a sow and her week-old piglets. We didn’t have a shot at the sow, but taking Mike’s admonition seriously, I killed a piglet so small, it would fit inside a bread bag.

Mike didn’t want any payment or favors in return for allowing us to hunt his place. But after we learned he’s smitten with turkey hunting, we invited him to Montana, where we hope to guide him to his first Merriam’s gobbler this spring.

Lesson Learned: Leverage contacts and relationships with your network of friends and offer to trade hunts in exchange for access to property with hogs.

While we knew hunting opportunities on public land diminish the farther south and east you travel from Montana, we hoped we might have opportunities to hunt pig-rich sections of state and federal land. Ultimately, we didn’t give ourselves enough time to research ­public-land options.

Locals told us public land can be productive, but noted it can take years to learn the best spots, including what is called “mitigation land”—properties managed for endangered species and where invasive hogs are often available to hunt for free or a small fee.

Lesson Learned: Do plenty of research on public plots, but expect to find the best hunting on private land.

We saw many more pigs at night than we did in the daytime. Our nocturnal experiences were guided by one of the Chain staffers, who fitted us with night-vision goggles and drove us around the property, and by Puckett, who gave us a thermal-­image tour of his deer lease.

This by-night hunting squares with what I know about most serious Texas and Oklahoma hog hunters—that “riding the night train,” as locals call after-hours hunting, is the ticket for the most and largest pigs. For locals, investing in pricey night-vision and thermal-imaging sights might make sense—good-quality thermal sights can retail for as much as $5,000. But for visitors, who might hunt pigs only once or twice a year, the experience was more novelty than practical reality.

Lesson Learned: Consider short-term rentals. You can rent night-vision firearms for $300 for a three-day rental, or a thermal sight system for $150 per day.

All told, we killed eight hogs. We loaded the wrapped meat in our freezer and pointed the Suburban north, weary but wiser for our first road trip for wild pork.

Read Next: Level the Playing Field when Hunting Feral Hogs with Thermal Imagers