14 Books That Will Change the Way You Hunt 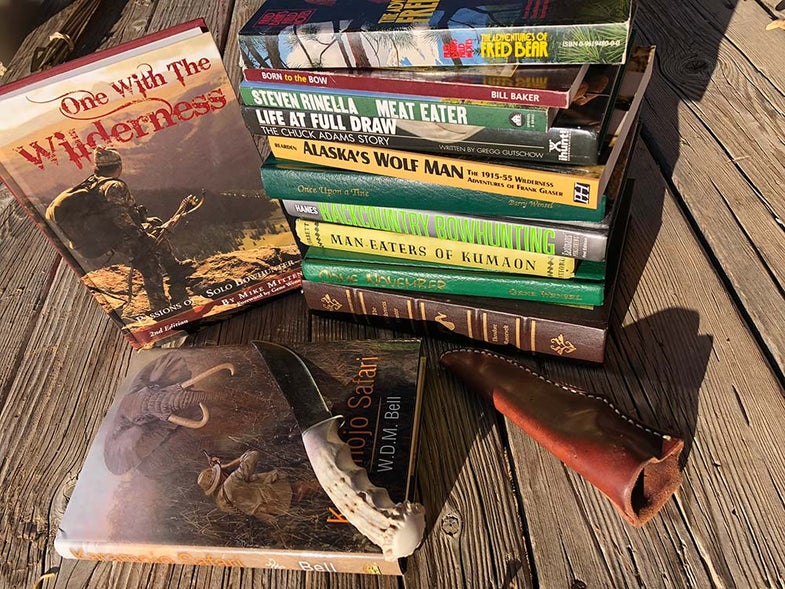 Some folks have a way with words. Fewer have skill with wilderness, hunting, and woodsmanship. Few indeed are those who possess both. Theodore Roosevelt was one of the finest, and without further ado, I’ll turn this introduction over to him:

“No one, but he who has partaken thereof, can understand the keen delight of hunting in lonely lands. For him is the joy of the horse well ridden and the rifle well held; for him the long days of toil and hardship, resolutely endured, and crowned at the end with triumph. In after years there shall come forever to his mind the memory of endless prairies shimmering in the bright sun, of vast snow-clad wastes lying desolate under gray skies; of the melancholy marshes; of the rush of mighty rivers; of the breath of evergreen forest in summer; of the crooning of ice-armored pines at the touch of the winds of winter; of cataracts roaring between hoary mountain masses; of all the innumerable sights and sounds of the wilderness; of its immensity and mystery; and of the silences that brood in its still depths.”

The authors and books listed below (in no particular order) are some of my very favorite. I’ve read, studied, and learned from them, developed my skill, honed my instincts, and increased my craving for wild places and wilder hunting. They’ll do the same for you.

Theodore Roosevelt was a man of integrity, as well as a verbose and prolific writer. Several of his works deserve a place on this list. This one, which offers a glimpse into hunting the Americas before they were tamed, is one of my favorites.

If you’re a hardcore whitetail hunter you know the names Gene and Barry Wensel. Hunting exclusively with stick and string, guiding for years along the famous Milk River in Montana, and now living in the Land of Giants in Iowa, they’ve learned through many close encounters much about truly big bucks. Come November is full of stories, information, and wisdom, and is a must read for anyone who enjoys good stories and hunting monster whitetails.

One of my favorite contemporary authors, Wayne Van Zwoll, sent this volume to me. It couldn’t have come with higher recommendation, and I immediately lost myself in the wilds of early 20th century India. Corbett wrote well, with decided lack of braggadocio, of his incredible experiences sorting out man-eating tigers. Wild stories of even wilder times, the reader is left wishing he were Corbett, yet is profoundly glad of a safe bed to retire to when darkness reaches its stealthy fingers across the horizon.

Don’s tales, thoughts, and essays of traditional bowhunting for Africa’s plains game provided the first inspiration I experienced to hunt the Dark Continent. Since then many additional volumes have added fuel to that fire, but Thomas’ prose left me smelling the dust under my feet and feeling the bowstring on my fingers. It’s a good book, one that will leave the discerning reader examining his own code of ethics, wiser on the subject of stalking African plains game, and with a desire to leave his own tracks in the Kalahari sand.

Nope, that title’s not a misprint. Uncle Barry, as he’s known among his friends and hunting buddies, has a sense of humor second to none. His wit is sharper than his broadheads, which are plenty sharp. This collection of stories and adventure from a lifetime of hunting with a traditional bow are mesmerizing, inspiring, and just might leave you with a laughter-induced side-ache.

It’s no secret that Rinella has established a clarion voice espousing the virtues of good hunting ethics, wildlife management, and common sense in today’s conflicted society. Perceptive and well written, this book entertains, enlightens, and educates all in the same breath.

With the possible exception of Theodore Roosevelt, Fred Bear has had more influence on hunting—bowhunting in particular—than any other author on this list. Photos, equipment and food lists, tales and tactics, and more are all laid forth in simple prose, detailing 15 adventures from the journals of one of, if not the, finest bowhunter of the 20th century. Read, learn, and go buy yourself a stick bow.

You might have noticed that many of my favorite authors are serious bowhunters. That’s partly because I love to venture forth with stick and string in my own hands, and partly because archery hunters often have a more intimate knowledge of the wildlife and wild lands they interact with. Suffice it to say that I learned more of the basics of backcountry hunting from this book than from any other, because it’s packed with info, tactics, and technique. I consider it an invaluable read for neophyte and veteran alike.

Read Next: 12 Remarkable Survival Stories, and What We Should Learn From Them

Just over a century ago ivory was like gold, elephants abounded in vast numbers, and a hunter with keen eyes, a well-zeroed rifle, and enough wit to keep him alive could make his fortune in a very short time. Not only did Bell posses the rifle, the eyes, and the wit; he also possessed skill with a pen. Karamojo Safari details the events of one of his great safaris into the deadly reaches of untamed Africa. An extraordinary marksman with nerves of stainless steel, Bell tells it like it was, with fascinating insights into life as it once was on the Dark Continent.

While on the subject of Africa, I would be remiss if I didn’t mention one of Capstick’s books. Known as a plagiarist extraordinaire, he nonetheless single-handedly captured the essence of wild Africa and distilled it into prose that captivated the hearts of hunters across the globe. A magician with pen and paper, Capstick will have you smelling the sun-dried long grass and the hippo’s breath.

I first heard of this book from OL contributor Tyler Freel. I knew when I heard the awe in Tyler’s voice that Alaska’s Wolf Man was a book I had to read. It’s a fascinating account of hunting, dog mushing, wolf-taming, and the extraordinary life of Sourdough Frank Glaser in the backcountry of early-twentieth century Alaska. Think you’re tough? Read this book—it’ll cure that notion.

Written by one of today’s most serious solo bowhunters, this book will inspire anyone with a craving for true skill and hunting adventure. Mike disappears into the wilds of, well, somewhere, and emerges days or weeks later with a big bull elk or Alaskan moose strapped to his pack frame. He’s not as skilled with a pen as he is with wilderness living, but his simple words embody authenticity, integrity, and heart. Great hunting stories, moose maulings, and genuine adventure fill the pages of One With The Wilderness, a book that every serious hunter should read.

Read Next: The 16 Best Fiction Adventure Books Every Outdoor Kid Should Read

An uncommon piece of literature, Born to the Bow is a compilation of stories written primarily about bowhunting in the author’s native Australia. Baker is entertaining, perhaps a bit brash by timid modern standards, and quite obviously good at getting smack in the middle of adventure. If you don’t already have a hankering to hunt Down Under, read this and you will.

“The Chuck Adams Story” is the subtitle of this volume, and that’s what it is. I filched this book off of a buddy’s shelf a couple decades ago and never returned it. As a relatively new bowhunter, I was inspired by the stories and insights into Chuck’s character. Love him or hate him, Chuck Adams knows how to hunt, isn’t afraid to bivy alone in the backcountry of Kodiak Island, and has focus. Read it with an open mind, as this book can certainly change the way you hunt.

Aram von Benedikt
how to hunt
Hunting and Fishing Books