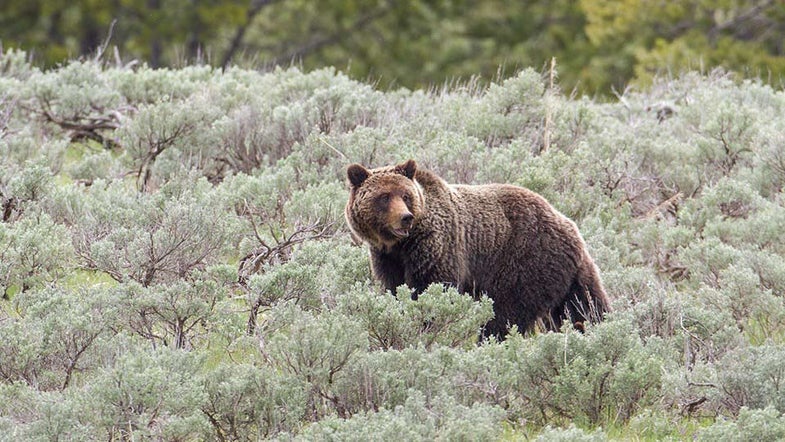 Despite exceeding recovery goals and a growing number of human-bear conflicts, a Federal judge ordered continued protections for grizzlies in the Northern Rockies yesterday, effectively blocking Idaho and Wyoming from proceeding with plans to allow grizzly hunts this fall.

After delaying a decision twice and on the cusp of the expiration of his latest order halting the hunts, judge Dana Christensen said his decision “is not about the ethics of hunting,” but whether federal agents considered the bear’s long-term recovery before lifting federal protections. In his opinion, they did not, according to a story from the Billings Gazette.

Since federal protections ended, wildlife officials in Idaho and Wyoming organized grizzly bear hunting seasons slated to begin this fall. Those seasons were highly regulated and carefully planned. Read about Wyoming’s grizzly hunt plan here. Going forward, the states would always take into account the number of all grizzly deaths each year (including those killed in self defense or to protect property) so grizzly populations never dip below 600. This year, the quota was 22 bears tags in Wyoming and a single bear tag in Idaho.

Animal rights groups have long argued against hunting as a bear management tool claiming such a program would merely speak to the desires of trophy hunters, and doesn’t consider the bears’ other economic benefits, like the revenue brought to small towns by wildlife watchers. Hunters and state wildlife officials, however, have long cited the rise in human-bear conflicts in the last decade, as another reason hunting would be the best management tool that would save the federal government countless dollars, and reduce the likelihood of human deaths, without endangering bear populations.

As judge Christensen mulled a decision through September, a grizzly killed a guide and wounded a hunter on September 15th. Wyoming guide Mark Uptain and archer Corey Chubon were field dressing an elk when two bears attacked. It was the latest in a series of human-bear conflicts in the Yellowstone and Teton areas. The sow and its full-grown cub were later tracked close to the scene and dispatched by Wyoming authorities. Donations to a GoFundMe account will help Uptain’s family with expenses.

“A reality of recovery is more bears in the ecosystem, which means expansion into new areas and increased contact with people,” Brian Nesvik, chief game warden of Wyoming Game and Fish told Outdoor Life this spring. “Some years are worse than others, based on weather conditions, available food sources, and travel patterns. But over time, as the population has increased, the number of conflicts with humans has increased. From 1985 to 2010, there were no mortalities of humans by grizzlies. Since 2010, there have been six. The change is there are more bears.”

The grizzly’s path to recovery in the Lower 48 is one of the great conservation stories in the U.S. After populations dwindled from an estimated +50,000 animals during the Lewis & Clark Expedition, to a mere 136, the federal government declared the species “threatened” in 1975. By 2007, the U.S. Fish and Wildlife Service (FWS) designated the species “recovered,” though a federal judge ordered the continuation of Endangered Species Act (ESA) protections while officials researched whether the decline of whitebark pine seeds would impact the USFWS’s opinion. When the FWS once again green-lighted delisting last year, plans began to transition bear management responsibilities from the federal government to Montana, Wyoming, and Idaho.

The current grizzly bear population in and around the Greater Yellowstone region hovers above 700 bears, though some in favor of lifting ESA status claim it’s higher, and wildlife advocates estimate the number is much lower. Moreover, while it’s not the first time groups fighting for animal protections used the legal system to stall action like the the delisting of gray wolves, it is a landmark decision in their favor. More than 20 animal groups, environmentalists, and Native tribes banded to challenge the listing, but Christensen said his decision focused specifically on whether the FWS met its ESA obligations.

Moreover, the FWS was waiting on Christensen’s decision before moving forward with plans to lift protections of approximately 1,000 bears in and around Montana’s Glacier National Park, Mission Mountain Wilderness, Whitefish Range, Bob Marshall Wilderness, and the Blackfeet and Flathead reservations in 2018.

Christensen stated, “This court’s review constrained by the Constitution and the laws enacted by Congress, is limited to answering a yes-no question: Did the United States Fish and Wildlife Service exceed its legal authority when it delisted the Greater Yellowstone grizzly bear?” He went on to write, “the agency acted in an arbitrary and capricious manner by not considering the estimated 1,200 bears in five other separate and distinct recovery zones.”

Essentially, Christensen’s brief states that since the FWS had the authority to delist what the agency feels are distinct populations of grizzlies, it’s preventing species connectivity and genetic exchange, and it must also show how that delisting might affect struggling populations in other recovery areas.

“If the Northern Continental Divide and Greater Yellowstone populations are both successfully delisted, the lower-48 grizzly listing will cover only two areas with fewer than 100 grizzlies, and one area where grizzles have not been affirmatively located in over 20 years and a fourth area where grizzlies have not been since at least 1975,” he wrote.

Lastly, while Montana did not have plans to hold hunts concurrent with Idaho and Wyoming in 2018; Christensen’s decision could affect future hunt proposals in the Big Sky state. The Montana Department of Fish, Wildlife and Parks is presently holding public hearings on proposed methods for counting grizzlies in the Northern Continental Divide Ecosystem—a region wholly contained within the state. Given Christensen’s decision, it’s unlikely the FWS will move forward with plans to lift restrictions in the Northern Continental Divide Ecosystem. But, if or when grizzly protections revert back to state management, Montana officials would have the authority to issue as many hunt tags as they deem necessary to control populations in that specific management area.