So You Want to Learn to Hunt with a Traditional Bow? 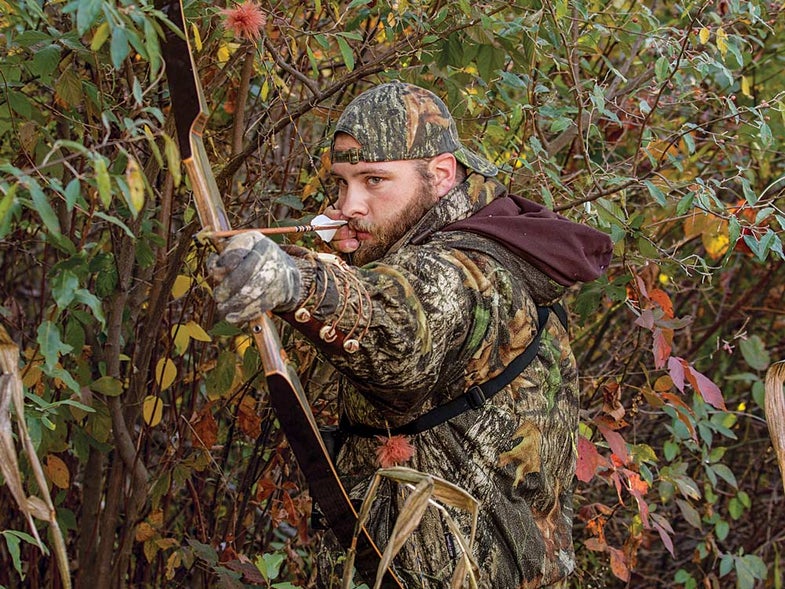 A still-hunter with a recurve hits his anchor point. Lance Krueger
SHARE

The tool of choice for most bowhunters is a modern marvel. It’s highly engineered, supremely efficient, and forged from ­aluminum, carbon, steel, and computer-aided algorithms.

And then there are the rest of us: bowhunters who use a tool that is simple and enduring. It’s built of wood and fiberglass by the human hand, and though it’s comparatively limited in range and efficiency, it’s absolutely deadly when mastered .

A few aspects of traditional bow design have been influenced by modern technology. But for the most part, it has remained largely unchanged since the days of Ishi, Fred Bear, and Howard Hill. And the stickbow is riding a newfound wave of popularity as more ­bowhunters look to change up their experience in the woods.

Thinking about making the plunge into a simpler side of bowhunting? Here’s what you need to know.

There are two basic types of traditional bows: longbows and recurves. You probably already know the fundamental differences between the two, but there’s a whole lot more to the design of each than first meets the eye.

Longbows are the oldest design. It is possible to get a flat stick-and-string, but “modern” longbows are likely to have varying degrees of reflex/deflex (see below) in the limbs, and those limbs will be trapped.

The advances in geometry are quite subtle but have had a big impact on overall bow performance. Modern traditional bows are of a laminated construction, meaning the limbs are made up of thin layers of wood and fiberglass sandwiched together using high pressure and heat-cured adhesives. The addition of carbon laminations and tapered wedges near limb tips is something only a scrutinizing eye would notice, but the impact on a bow’s efficiency and overall performance are appreciable.

Most traditional bows are one-piece designs, but many are takedown models. There’s a buzzing world of bow ­manufacturers and craftsmen producing everything from ­high-volume production models to one-off custom builds.

Traditional bows are shot with fingers on the string. No release aids. The most popular shooting styles are three-under and the Mediterranean draw. Both work and both will take plenty of ­practice to master. Choose the style most comfortable for you.

You won’t be using sights to aim. You’ll be shooting instinctively or sighting down the arrow shaft. It is possible to use a simple rest, but most serious traditional bowhunters prefer to cant the bow and shoot directly off the arrow shelf.

The draw cycle is quite different as well. There is no valley. No let-off. No solid back wall. Drawing and anchoring the bow consistently will require muscle memory that comes only with practice. I release the arrow when my index finger brushes the corner of my mouth. Others bring the string to the tip of their nose and gap shoot. Your style will develop only after enough practice.

Hoyt Satori
Price: About $850 for the full system.

The Satori is a recurve system that includes a choice of machined aluminum risers (17-, 19-, and 21-inch models), along with three limb lengths. It’s fast and shoots great, and its highly engineered design means excellent consistency in performance from bow to bow.

When tradition meets tech, you get something like the RK1. New Breed Archery machines the risers, and Striker makes the limbs. The cool thing about this system is that you can use either a reflex/deflex set of longbow limbs or snap on recurve limbs. This bow is a sweet shooter.

The Elite recurve has been around since 1991 and is the epitome of a fully customized bow. The array of wood options are as numerous as they are gorgeous. You can choose from a one-piece or takedown version (as shown here), and you can choose from 62-, 64-, or 66-inch versions.

This is a custom bow built by hand, but it’s available in only a limited number of configurations. So you get custom performance in a more affordable package. The bow has trapped limbs, and the use of dense diamondwood in the riser adds more mass to it, which reduces sound and shock.