10 Life-Changing Lessons I Learned From My First Africa Safari

When Alaska is your Back-40, fantasies of hunting elsewhere are limited. Then you go to Africa 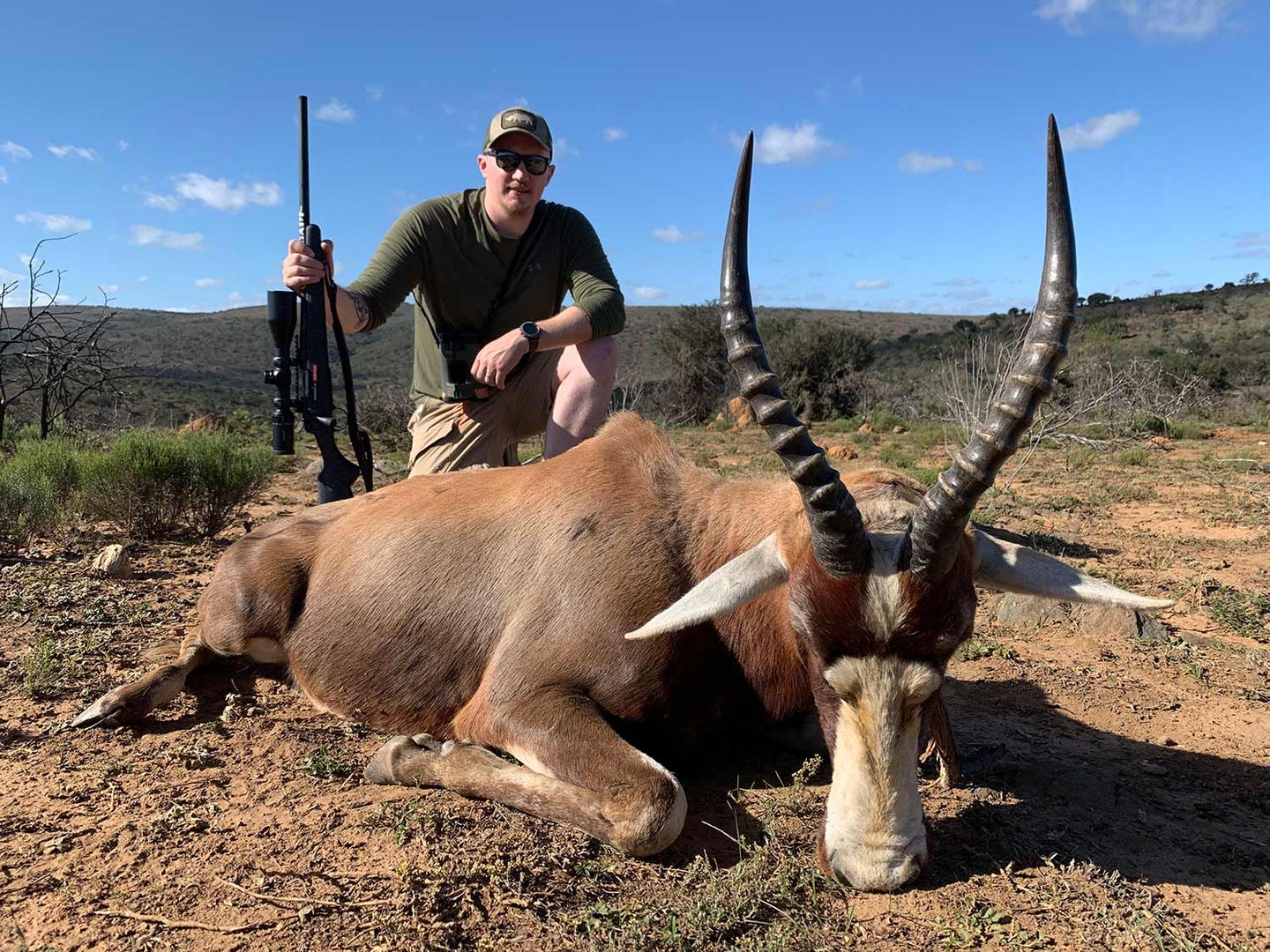 There is no place in all of hunting lore as iconic as Africa. Talk to anyone who has been fortunate enough to have hunted there and they will wear your ears out telling you about it. Because it seemed such a remote possibility, Africa never really made my bucket list. I wasted no time daydreaming about it. That all changed when I received an invitation to go on a hunt on the Eastern Cape of South Africa for plains game with Frontier Safaris. It was to be a completely new world for me, and literally almost as far on land as I could get from my home in Alaska. With some initial reluctance, I went, and had the time of my life. I was a complete greenhorn in a strange new land. I learned a lot. Here’s some of it:

1. Africa Is Incredible (even if you don’t know it yet)

I was that guy—the one who was perfectly satisfied with the hunting that I had at home. Although I had nothing against hunting in Africa, I would not have never gone out of my way to go there. Impala, zebra, wildebeest all seemed cool, but I didn’t much care, frankly.

The travel definitely sucks—I knew that. But once there, my perspective quickly changed. A whole new world of animals and things to be learned was opened up to me, and I had an absolute blast. There is something for just about every hunter in Africa. Multiple varieties of plains game and dangerous game abound. If a person can go to a quality outfitter and not have an incredible experience, they need to do more research.

I can’t give you firsthand stories of traveling to Africa with guns, because I haven’t done it. However, I have heard some terrible ones. I can tell you that traveling without them is a cinch. Granted, many of us want to use our own rifles on a hunt, because that’s a special part of the hunt to us. But if you aren’t particularly attached to using a particular firearm, ask your outfitter whether you might be able to rent or borrow a gun once you get there. That means no lengthy waits in customs, no routing your trip through the most firearm-friendly airports, no BS, just travel. Should you wish to bring your own guns, any quality outfitter should be able to tell you exactly what you need to bring your gun into the particular country, and sometimes even which airports to avoid and whether or not to plan long layovers while booking your flights. Whatever you do, have all your ducks in a row long in advance so that there’s are no surprises and you can relax and enjoy your trip.

I would imagine that I fall somewhere toward the middle of the spectrum when it comes to Ophidiophobia. I wouldn’t say that I’m terrified of snakes, but Africa has lots of poisonous ones and their abundance varies upon the area and time of year that you go. On my trip, we encountered two cobras and a puff adder—both are deadly. Typically, the cobras get out of your way long before you see them. Puff adders, though, are a lazy snake and tend to get stepped on, and thus, bite more people. Even if snakes don’t terrify you, learn what snakes are present in the region you visit, pay attention to where you walk, sit down, and where you put your hands, and you’ll be just fine. Probably.

Most of the hunting I do in Alaska requires knee-high rubber boots, hip waders, or technical mountain boots. None are well-suited for Africa. The area I hunted on the Eastern Cape of South Africa was comprised of rolling hills with some steep, rocky country. Everything was solid ground, and amazing to walk on for a tundra slogger like myself. I took a set of Lowa Zephyr TF boots, which have some support and protection from rocks, but are very lightweight and cool. The boots were great, but one thing I wished I’d brought were ankle gaiters. These aren’t the tall, mud, shale, and water gaiters many of us wear in the mountains of North America, but short little gaiters that just cover the top of your boots. They’re made of leather and are quiet. Most importantly, they keep all the bits of brush, grass seeds, and other junk out of your socks. I wish I had brought some.

5. Be Honest With Your PH

On any new hunt, a person naturally brings their own expectations and preferences. If you want the most out of your hunt, be sure to communicate your hopes with your PH and tell them what you want out of a hunt. Each hunt and species varies in terms of how they are hunted. PH’s are usually highly effective at helping you get your animals, but if you prefer to walk all day and glass or track, or you prefer to travel to vantage points to glass and plan stalks, they are usually happy to accommodate you when possible. If you’re bowhunting and would rather spot and stalk than sit on a water hole or bait, you can have that experience, just speak up. If you say nothing, your PH will help you get your animals in the most efficient way they can. If you’re looking for a different kind of experience, make your wishes known and they will most like be accommodating.

A big part of the experience of hunting in Africa, especially your first time, will be learning. Learning about new animals, a new place, and how things are done in another part of the world. Although you should tell your PH what you want to get out of a hunting experience, don’t be afraid to ask questions and be willing to try a style of hunting or hunt an animal that you may not be used to. As hunters, we tend to limit ourselves with preconceived notions and biases. In Africa, I found it most rewarding while trying something new and different. Many times that meant hunting an animal differently than I ever had previously.

Contrary to popular belief, for many animals in Africa you don’t need a Nitro Express double rifle. Sure, there are a few animals that might require a big gun, but if you’re hunting plains game use the rifle you are most comfortable with. African animals have a reputation of being tough, but put a decent hole through both lungs, and its game over. The biggest animals I took on my trip were zebra and wildebeest, and everything I shot was taken cleanly with a .308. In fact, my PH told me that one of his favorite rifles for everything up to and including Kudu is his .22-250, and he’s seen lots of eland (almost the size of a moose) killed cleanly with .308s and 7mm-08s. If nostalgia prescribes that you bring your .375 H&H, that’s just fine, but don’t feel like you need to. You’re best suited using a rifle that you can handle and shoot very well.

Of course, you want to practice shooting before you go to Africa, but this doesn’t mean burning through half a box of ammo on a shooting bench and calling it good. Perhaps the biggest adjustment will be shooting off sticks from a standing position. Sure, you have a rest, but it’s not a bench. If you don’t practice, it’s not the easiest thing to get used to on the fly. If possible, practice with a buddy (acting as the PH)—give yourself a little pressure—and have him call out targets for you. This can be a lot of fun with a few steel plates at varying angles and distances. It will help you prepare to make a shot on a specific animal when the time comes. You will often not have much time to shoot. You’ll have to strike while the iron is hot. Be sure and practice other improvised positions as well, I had shots off shooting sticks, but also kneeling next to a termite mounds, sitting against rocks, and lying prone.

Another bit of advice I received before I left was that it’s a good idea to save a little extra money and set it aside for something that’s not on your chosen animal list to hunt. Typically, when you book a hunt, you’ll have an agreed-upon list to hunt on your trip. Sometimes species that are valued similarly can be exchanged, but it’s nice to have a little extra cash set aside for something special. One cool thing about hunting in Africa, is that you might be on a stalk for one species and bump into another that is totally unexpected. When you’ve made the effort and been through the travel to get to Africa, it’s nice to be able to go ahead and hunt something you might not been expecting to hunt.

Although you’ll hear the term ‘trophy’ used frequently with regard to the hierarchy of animals you’ll be hunting, the real trophy you bring home is the experience of being in a new place and hunting animals you may have only ever seen on TV. Learn from my experience. I got on a plane with tempered expectations, but was blown away by how amazing and how much fun the it all was. I was fortunate to hunt some very cool animals, but more than what I did get to do, it opened up a whole new world of possibilities and interests that I didn’t know I would ever have. Make sure that you savor every minute of your hunt. Learn as much as you can, try all the food, and enjoy at least one good African sunrise over a cup of coffee. There’s a reason almost everyone who has hunted Africa longs to return. Now that’s me.