4 Turkey Hunting Tactics That Work When Nothing Else Will

Sometimes turkey hunting is like magic, and responsive gobblers come in on a string. These tactics are for all the other times. 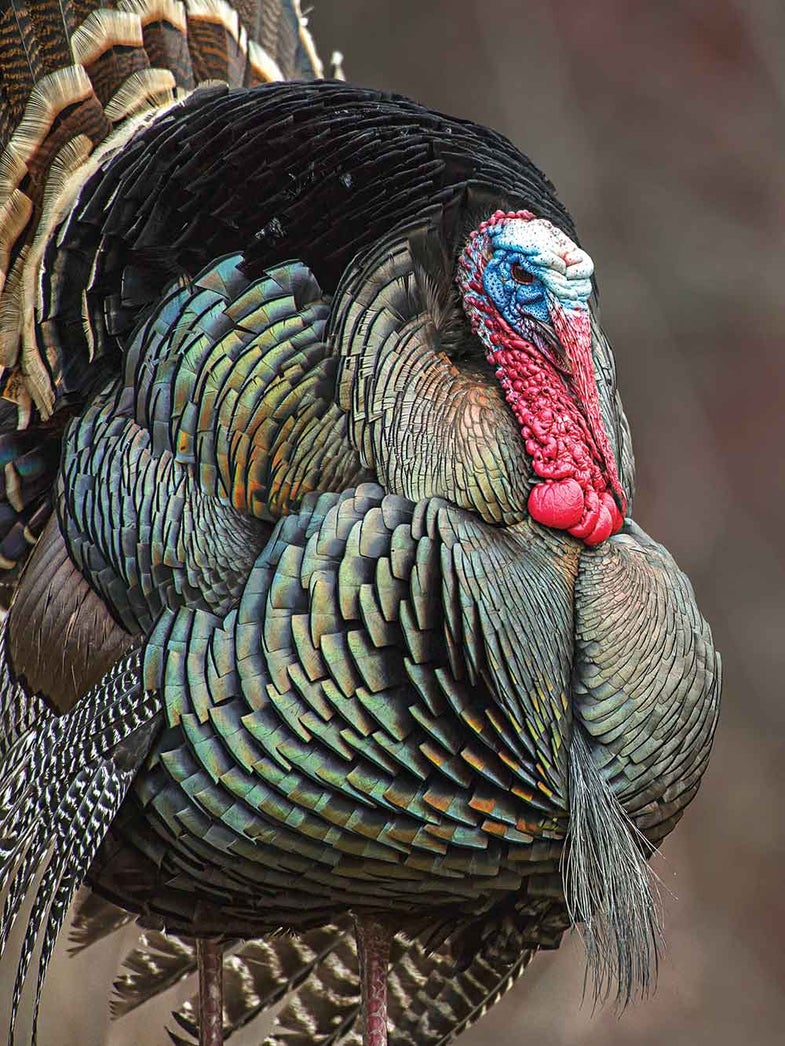 4 Turkey Hunting Tactics That Work When Nothing Else Will.
SHARE

The classic spring-morning turkey setup is classic for a reason: It works, at least some of the time. The birds are gathered in one spot—their roost tree—and they are usually vocal and callable. But every veteran turkey hunter knows that even a sure-thing flydown strut-buster can sputter and fail. Here are four ways to salvage what remains of your day.

The toughest toms to tag can be those that hang out in vertical landscapes—the steep slopes of Western canyons or the corduroy country of Appalachia and the Northeast. Sometimes the terrain is so vertical, you can call a gobbler to 15 yards and still not see it. When you finally do, just his red head pops up, and the rest of the bird remains hidden by the hill. Canyon crossers are another challenge. A tom might roost on one side, fly down to the other, and climb the opposite rim to strut. In those cases, you may need to ford a creek and climb 500 feet to reach him.

The best way to circumvent turkey troubles in vertical country is to look for terrain features that can help you get the drop on incoming gobblers.

Gobblers will strut and preen in the woods and glades of canyon slopes, but often they hike up to the canyon rim and strut there, especially if it borders a pasture or crop field. You can watch for this from an elevated lookout. Use a good binocular and back it up with a spotting scope. In the West, we sometimes glass rim-edge turkeys from 2 or 3 miles away, usually from the opposite side of the canyon. Move in when you’ve identified a popular edge, either using the steep ridge to hide your approach from below or finding little creases and rivulets that can hide you if you need to drop in from above.

Like turkeys everywhere, canyon toms have preferred roost sites—for a few nights in a row at least. Listen for gobbles in the evening or before dawn to pinpoint these places, then set up on the rim nearest the bird, uphill of the roost, and try calling him to you.

Toms will walk and strut on steep ground, but they’re easier to see and shoot when they’re on flat ground. Most canyon walls will have a few meadows on benches or gentler south-facing slopes. Some are cut with old logging roads, which offer flat but narrow strutting zones. Set up a decoy on a sunny bench and call to the gobblers. —R.S.

It happens sooner or later everywhere, every spring: Gobblers go haywire, altogether ignoring or even outright running from your calls—even if you’re a maestro. Hunting pressure, stage of breeding season, and an abundance of hens can all contribute to the problem.

So quit calling. Cold turkey. Period. Then stand strong. That’s the first part of your solution. Raiding your whitetail-hunting playbook is the rest of it.

You wouldn’t hunt deer without trying to figure out their movement patterns. Use the same scouting skills and tools to unlock turkey habits in the area you hunt. Google Maps, on-the-ground reconnaissance, and discreet glasswork from a good vantage point will all help tell you what the birds are doing.

Staking out a random spot doesn’t work in deer hunting. Success comes from watching trails, travel corridors, funnels, and pinch points. Same with turkey hunting. Now that you know where the birds are going, be there yourself. A killer spot: the route birds follow between their roost and morning food.

You hunt bucks around scrapes and zones where they like to rut. Silent toms still breed. Wait for gobblers where they like to hang out and show off for hens—their strut zone. Look for wing drag marks through leaves, in trails, and on field or meadow edges to reveal these hotspots.

Use bad weather to your advantage. Wind? Head to lee hillsides, calm coulees, quiet valleys, and secluded draws where wind-­hating turkeys congregate. Rain? Get out of the woods and watch a field or meadow where birds will be preening in the hours following a shower. Cold? Hit a sunny field edge where hens—with toms following—come to absorb rays and warm up. —T.C.

This spring, 36 of the 49 states that have spring turkey seasons will allow hunters to shoot until sunset. A decade ago, that count was 21. Clearly, we’re getting over old-­fashioned hang-ups about evening hunting harming turkey populations.

But morning gobblers and evening gobblers require two very different approaches. And the wrong kind of evening hunting pressure can push turkeys away from preferred roost sites and out of your hunting territory. Put the following considerations to work and shoot a gobbler as the sun heads toward the horizon.

You wouldn’t get to your morning spot late. Give your afternoon hunt a similar effort and be sure you are in place well before the birds show up. A spring day is long. Hungry birds come out to feed early. Spring gobblers get hungry, and they feed hard in the afternoon and evening. Set up three to four hours before sunset.

Don’t hunt directly under roost trees. Instead, hang back along travel routes or at feeding areas, where birds are going to be while shooting light remains. Turkeys returning to the roost will often just reverse the same route they took out in the morning. Set up in a spot slightly above travel routes, where you have good visibility and a wide shooting lane.

Get set for a long wait. Build a blind from natural materials, use camouflage fabric, or erect a pop-up tent. Evening birds are jittery, suspicious, and ultra-alert. A good hide provides some forgiveness if you stretch or make an errant movement.

Hens and gobblers alike often aren’t much interested in breeding—or talking about it—late in the day. No calling at all may be best. If you do call, use only the softest clucks and whispery yelps. Sound carries far in the evening.

Okay, so this one isn’t low-impact. But in the prairie states and open areas of the West, use the late afternoon and evening to glass from vantage points. Once you’ve spotted a moving flock, drop into a parallel drainage to sneak ahead, come over the top, and intercept them. —T.C. 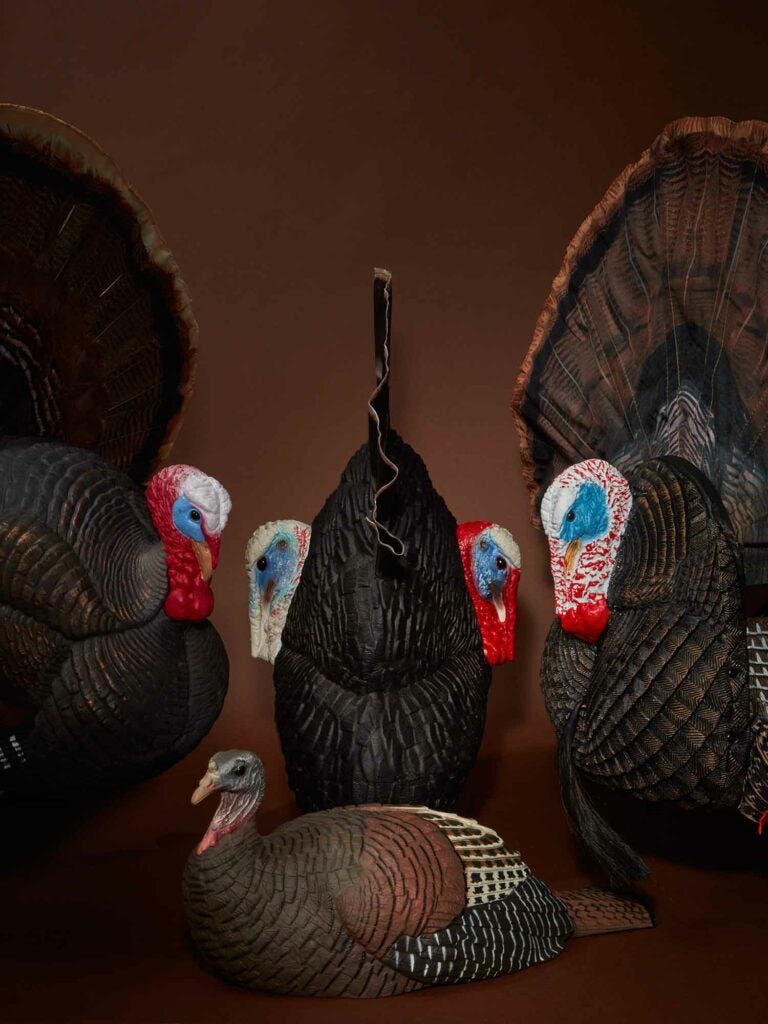 Remember that scene from Top Gun when Maverick tells Goose he’s going to let the enemy fighter jet get closer? To Goose, the tactic seemed counterintuitive, if not crazy. That’s exactly how I felt when my turkey guide, Jimmy Warner, told me he was going to run off the jakes in front of us.

“You’re gonna do what?” I mouthed through my face mask. We’d taken an hour to slip into position undetected. Generally speaking, a group of turkeys has a calming effect on other turkeys, so I couldn’t believe that Warner was about to blow it all by running them off. But that’s exactly what he did when he leapt to his feet, waved his hat, and sent the mob flying. Thirty minutes later, a gobbler crept in, now uninhibited by the band of randy jakes, and I nailed him. As it turned out, Maverick—and Jimmy—knew what they were doing.

Here are a few other times when it makes sense—however wrong-headed it might seem—to charge ahead instead of melting into the background.

In areas that produce large annual hatches, jakes can band together like a high-school clique and harass solitary gobblers into conceding some turf rather than fighting it out. Jakes can be especially aggressive with decoys. If you are hounded by groups of jakes and not seeing mature gobblers, then employ the same tactic that Warner used. Get up and run off the adolescents, then sit back and call softly. Often wary gobblers will sneak in without a sound.

2. Run with the Bulls

Thanks to some scouting, Warner and I knew turkeys liked to loaf in a large feedlot on a working ranch in Oklahoma. But the lot was almost completely open, with no way to approach the birds undetected. So Warner did what any turkey guide in ranch country would do: He opened a gate and quietly shooed cattle toward the feedlot, then we slid in behind the yearlings until we found cover in a corner of the lot. The cows dispersed, and we called in the turkeys.

Using a turkey tail fan to approach gobblers is nothing new, especially for Westerners, who are long on vistas but short on cover. Most hunters use this fanning tactic—which has recently been given the grim name of “reaping”—to pique the dominance instinct of a tom and lure him into range, or to shield a hunter’s movements in order to get into better position. But in the right circumstances—a last-gasp effort to kill an open-field tom in an area where you have exclusive hunting access—you can modify the technique and actually charge the turkey. Hold a large tail fan to shield as much of you as possible, then run toward the gobbler until you get within gun range. This high-stakes tactic works only occasionally—maybe once every five or six times—and when it doesn’t work, it will spook the bird into the next township and stymie any follow-up approach. But when it’s your final opportunity, and you are sure no other hunters are working the area, then it can save a hunt where more conventional tactics failed. —J.J.