Taking Care of Taxidermy: Tips from the Reigning World Champ

If the name Dale Manning sounds familiar, it should. He’s a regular part of the OL Optics Test team, and... 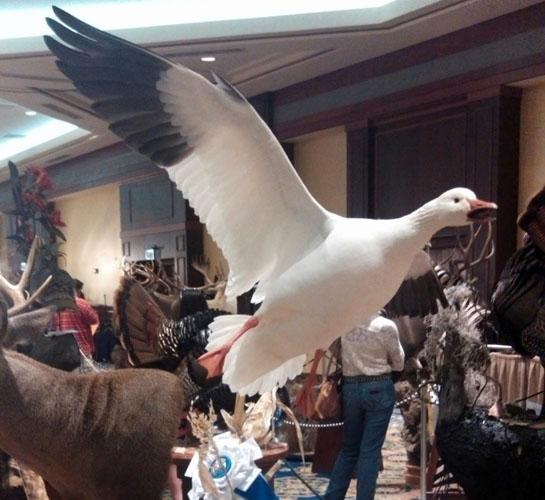 If the name Dale Manning sounds familiar, it should. He’s a regular part of the OL Optics Test team, and he’s among one of the best taxidermists in the country. In fact, the world.

Manning, who owns Custom Bird Works and Big Game Connection taxidermy in Missoula, Mont., won the “Best in World” in the waterfowl category at the 2013 World Taxidermy Championships in May. His flying snow goose, according to internet message boards, wowed everyone in attendance.

I stopped by Manning’s shop in April to drop my harlequins and Barrow’s goldeneye off and watched as Manning tried out a new technique for making the legs look more realistic. He was carefully layering powder on the orange legs, trying to get that perfectly realistic look for which all taxidermists strive.

“You know how when you look at the leg, you’ll see lighter skin in the cracks and folds of the skin?” said Manning. “That’s what I’m trying to replicate here.”

The seemingly innocuous detail is what makes a world champion. “When you get to this level every little thing matters. Everything has to be perfect,” he said.

Often a taxidermist goes into competition with several pieces to better his odds, but this year Manning went with just his single snow goose. “I’m putting all my eggs in one basket this year,” he said, noting that his associate, Tyler Hoffman, entered four pieces in the Professional Division, which is a step below Manning’s Master Division. Hoffman brought home the “Best of Category” in waterfowl, too. To say they did well on one of the largest stages is an understatement.

Unlike most taxidermists, who usually stick to one discipline, and rightfully so, it’s very difficult to be excellent in multiple categories, Manning is also recognized for his big game work. In 2007, he and Hoffman entered a polar bear in the world championships, which features entrants from around 20 or so countries; they won the “Collective Artists” award, as well as first place in the “Large Mammals” category. Manning also produced a full-body ram leaping down a rock outcropping that cleaned up at the state level competition, garnering nearly every award possible.

To say I’m stoked to get my mounts back is also an understatement. I routinely check out the pictures on Manning’s website, which just gets me more excited – Manning himself doesn’t help the situation when he texts me pics that tease the promise of what’s to come (although, I continually reference those photos, too).

With my mounts in the not-too-far-distant future, and with a world champion on the other end of the telephone line, I thought to ask about proper care of mounted birds. Here are a few tips from the master:

Keep it dusted: Manning recommends regular dusting and cleaning of mounts so that the dirt doesn’t build up. How often depends on how dusty your place is – if you live on gravel road, odds are you’ll have to brush it off more often. Use a feather duster to knock the excess dust off.

“There’s an odd old wives’ tale about using a fresh piece of white bread to clean the dust off birds,” said Manning. “I’m sure it will work, but it will also leave the oils, crumbs and whatever else is in that bread behind. It might also make it smell good to your dog.”

Use lacquer thinner: Don’t use water to remove residual dust and bring out the shine of a bird’s feather, but instead lightly soak a rag with a little lacquer thinner and wipe it over the mount. “Lacquer thinner evaporates from the feather, leaving just a clean mount with bright colors behind,” he said. “Water will matte the feathers and mess them up.”
Keep it out of the sun: Feel free to display your mounts prominently, but take care where you put them. “Direct sunlight will definitely bleach and fade feathers. If you want to keep the original richness and vibrant colors, keep it out of direct sunlight,” he said.

Watch Fido and Fluffy: Kids throwing a ball through the house can knock a mounted bird off the wall or its base, but Manning points to pets as major culprit of destroy memories. “Dogs and cats always seem to get bird mounts,” said Manning. “And, you can’t really blame them if you leave it where they have access to it.”

Repairs are possible: Whether the kid, cat or a natural disaster damages your prized mount, often times it can be salvaged. “Birds are more forgiving than people think,” he said. “Most of the time they can be spruced up; broken tails, wings necks and feet can all be fixed or repaired to one degree or another.”