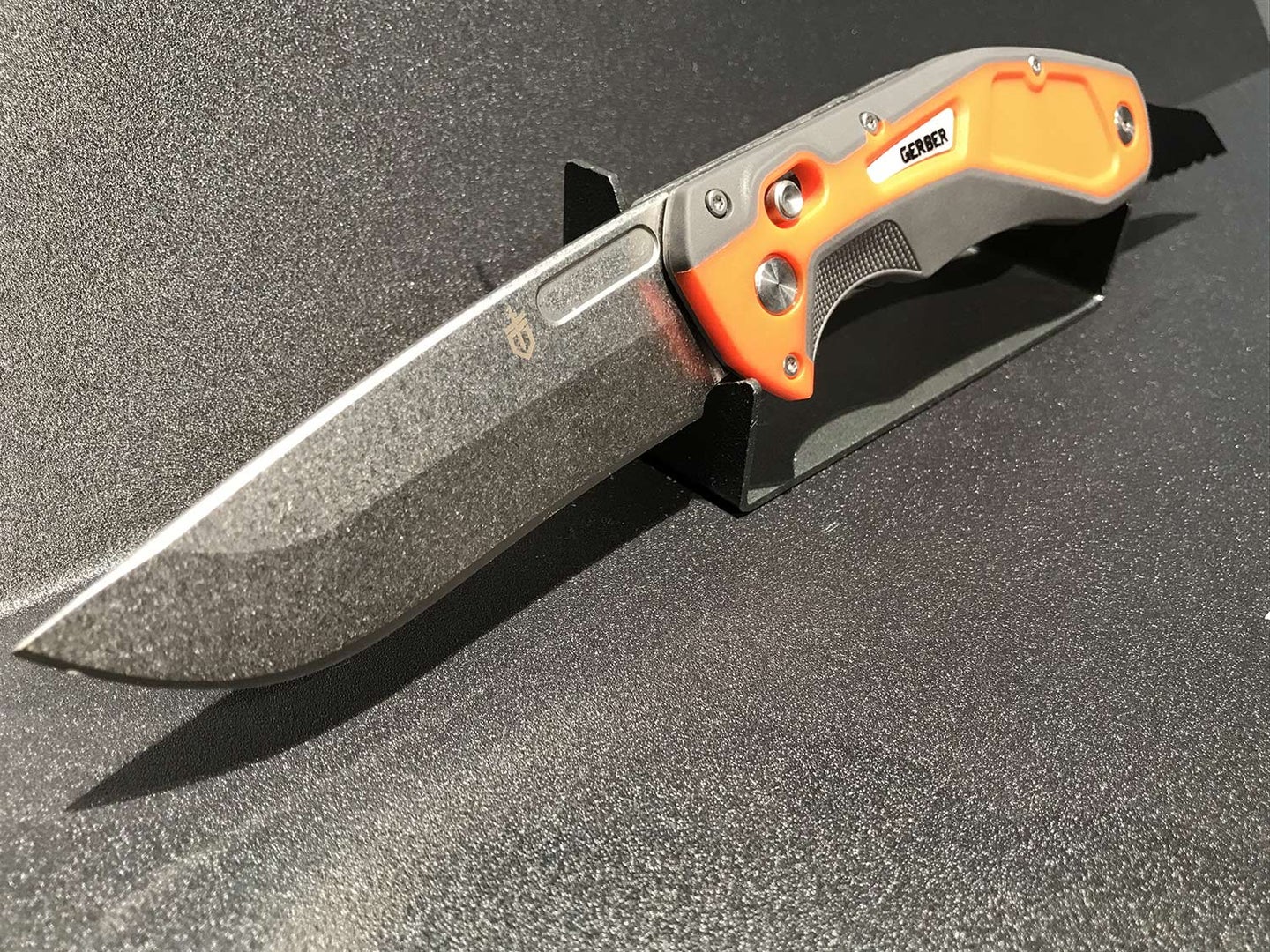 While guns, ammo, and optics may hog the spotlight at SHOT Show, it’s also one of the best places to see the latest and greatest production knives and tools. We bobbed and weaved our way through the crowds to check out a few of the new models coming for 2020.

While the moniker may denote “SHTF knife” the design and color definitely says, “EDC hunting knife!” Why? Well, a safety orange handle for one. Because looking for a black or tan knife on the ground can be as much fun as a case of scurvy. The S30V blade is a shallow drop point that works for a lot of different tasks and should hold an edge well. Ambidextrous pocket clip? Yes indeed. Axis lock? Oh yeah. It’d be really great if the blade were about a quarter- to half-inch longer, but that seems like a first world problem. The 533 is crazy light at only 1.5 ounces and crazy thin at only .412 inches thick making it easy to carry any place at any time. It even fits in an Altoids tin if that’s your thing. MSRP is $140.

The Havalon Talon Hunt uses replaceable blades in numerous configurations. These are not disposable scalpel type blades. This system includes a polymer handle with rubberized inserts, various blades, and a knife roll with pockets to keep everything organized and securely held in place. Included in the kit is a skinning blade with serrations at the back cutting edge, two drop-point gut hook blades and one 5-inch fillet blade. The blade replacement system is fast and simple, just push a button and pull the blade from the handle. Another nice aspect of the new blade attachment design is that it doesn’t sacrifice any of the cutting edge. The skinning blade and gut hook blades are stiff while the fillet blade has a nice flex to it. It’s a smart system, and having interchangeable blades saves having to carrying three different kinds of knives. If space isn’t an issue and you think the animal is going to be boned out, this would be an ideal option. MSRP is $89.99.

SOG’s new Aegis AT is an eye-catching departure from the tactical knife genre. It is bigger than you might guess for a knife aimed at the technical outdoor crowd. The 3.7-inch long spring-assisted opening blade is made from D2 tool steel, which is a solid choice that helps keep the knife affordable. All Aegis AT blades are titanium nitride coated black. The polymer handles have steel liners to support SOG’s XR lock which is a cross-bolt style system with a blade-locking safety on top. The Aegis AT is fully ambidextrous with opening studs and lock-release buttons on both sides. The clip is also reversible. The knife blade opened easily and quickly with the thumbstud and locked solidly in place. The handle was ergonomic but more aggressive texturing would be nice. Overall this is a great looking general-purpose knife. Five different color schemes are available. MSRP is $95.

Designed in conjunction with well-known TV hunting personality Randy Newberg, the Dual Tool System is a two-bladed knife that will resonate with hunters who disassemble big game. The principle is simple: have a shorter and more aggressive “sacrificial” blade for slicing through thick hide, separating joints and cutting tendons in order to save the edge of the main blade used for gutting, skinning and slicing. While that may not seem necessary, the former tasks are tough on the cutting edge of most knives and this will keep the main blade sharp and more efficient for those finer cutting operations. The tendon tool is made from D2 tool steel and held open by a linerlock. The primary 440C blade uses a cross-bolt style lock system. The full-size blaze orange handle will be easy to hang on to even with wet slippery hands and has a reflective strip on the side to quickly locate it in the dark. The price paid for the utility of the two blades in one knife is that it is a bit bulky, it definitely is not a pocketknife. MSRP is $60.

The Dividend has an unusual blade, it’s made from two different steels and the shape is kind of a cross between a drop point and a Wharncliffe. The top half of the assisted-opening blade is made from Bohler N690 for corrosion resistance and hardness. The blade’s bottom half is D2, which is good for wear resistance, toughness, and edge retention. The process to join them together gives it a tooth like pattern. It’s attention getting to say the least. The Dividend has opens one handed with a flipper and locks in place with a steel liner. The pocket clip can be put on either end of the handle as well as either side for either tip-up or tip-down carry. The machined aluminum handles are lightweight and anodized olive drab. It was easy to open, locked solidly in place and fit well in the pocket. With its 3-inch blade, multiple carry options and relatively light weight, this would be a dandy EDC knife. MSRP $130.

This is a radical departure for Victorinox as this is their first fixed-blade knife, and they went all in. It’s a full tang, Scandi grind, drop-point blade made from 1.4116 stainless steel. The blue and black micarta scales are attractive and ergonomically contoured rather than just radiused at the edges, its comfortable and a custom-knife kind of detail. The Kydex sheath has a drop style belt loop and even has adjustable tension for withdrawing the blade. As an added bonus there is a Firestarter attached to sheath that can be sparked by the back of the Outdoor Master blade. This isn’t a lightweight knife by any means, but it should be hella stout, cut well, sharpen with ease and even help start a fire if necessary. MSRP is $199.

Based off a design from the late custom knife maker and designer Kit Carson, the M40-03 is full size pocket clip folder with a 3.4-inch spear-point blade. At first glance it appeared to have button at the pivot point. Interest intensified. Sure enough it was button for their Deadbolt lock. Two pins pass through the blade and liners at the pivot area creating a lock as strong as the sheer force of the pins. It is a very strong and secure lock. The blade opens with either a thumbstud or flipper and rides on bearings so it smoothly rotates into place with minimal effort. To close the knife simply push the button to unlock the blade and rotate it closed. The steel liners are covered with aluminum bolsters and glass reinforced polymer scales. The pocket clip is reversible and with thumbstuds on both sides of the blade and the flipper in the middle, it’s good for lefties as well. At just over 4 ounces the M40-03 probably won’t be the choice for back-country hunters. But for EDC it is an attractive knife with a useful blade that opens quickly and smoothly and stays in place with a solid lock design. MSRP is $140.

Deceptively simple in appearance, the Al Mar Eagle is an impressive knife that brings a full-size knife blade to the party without the bulk or weight. Designed to be opened with one hand via a well-designed flipper, the D2 blade is a 4-inch drop point with a false edge on top. It is somewhat narrow for its length giving it a sleek appearance. The blade rotates on what Al Mar Knives calls a “ceramic bearing pivot system” and it opens quite smoothly. The frame lock and opposite-side handle are thin and made from titanium. This makes it light and easy to carry in the pocket. The clip is reversible which is good, but it would be nice if it were a bit farther back on the handle so the knife would ride deeper in the pocket, as quite a bit of the handle sticks up when carried this way. Other than this minor gripe, this is a well thought out knife with much more to offer than initially meets the eye. MSRP is $235.

There is nothing revolutionary or novel about the model 842 knife, and it would be easy to be underwhelmed, but that’s kind of what’s appealing. It’s well-designed, made in the U.S., attractive, and makes for a solid EDC linerlock knife with premium materials at a very fair price. The blade is the heart of any knife, everything else is just transport and support systems. The 842 has an S30V stainless steel, 3.125-inch drop-point blade, which is an exceptionally useful size, shape and material for general EDC as well as for hunting. It opens smoothly on their bearing pivot system with a flipper, so it’s easy for lefties to deploy as well. The liners and linerlock are covered by blue and black G10 scales which are thin yet nicely contoured which is comfortable and exposes the layers to create an attractive pattern. The pocket clip allows for deep carry which is nice. Overall this knife was very comfortable to manipulate and take in and out of the pocket. At an MSRP of $150 this is a solid knife that can pull double duty for EDC or as a pocket clip hunter. MSRP $150.