“Whoa Bear. Get Outta Here.” How to Talk Your Way Out of a Dangerous Wildlife Encounter 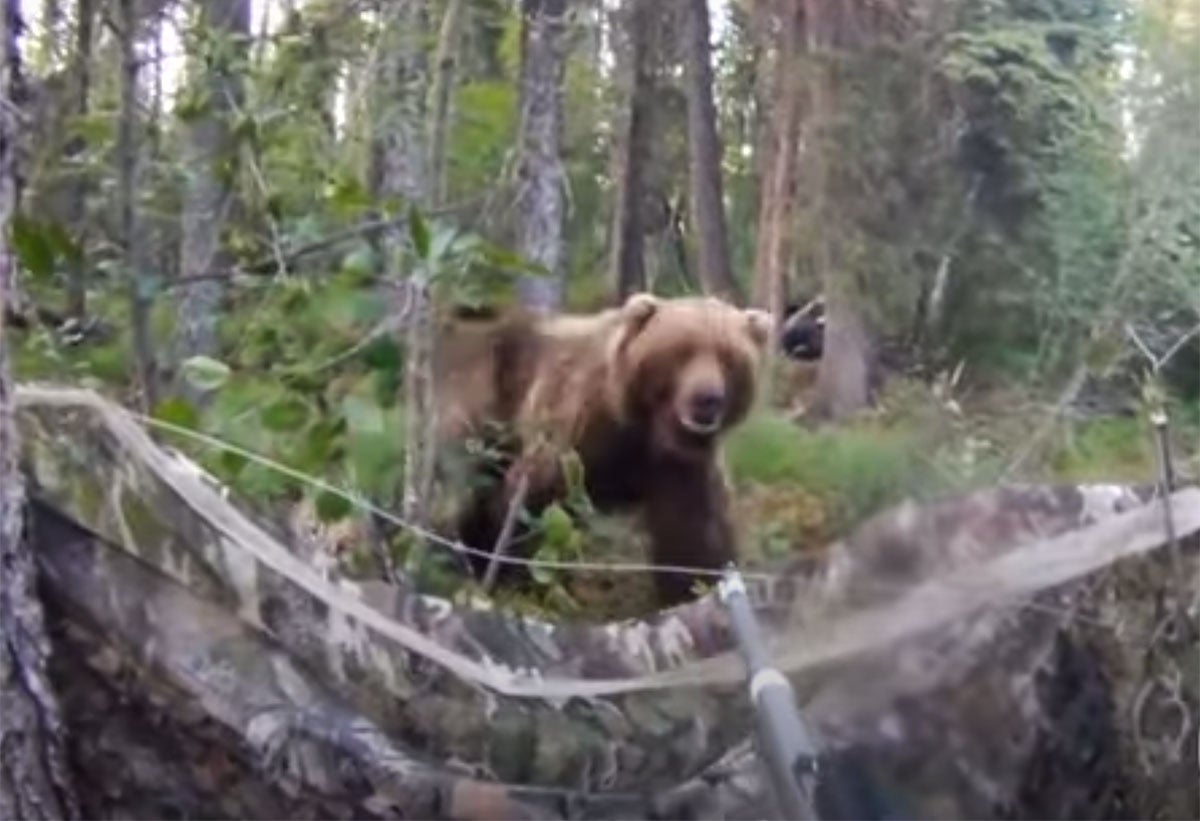 The author's close call with a grizzly. Tyler Freel
SHARE

If there’s one guarantee about encounters with potentially dangerous wildlife, it’s that there are no guarantees. Potential wildlife conflict situations can present themselves in the unlikeliest of places (as illustrated by the recent encounter a woman here in Alaska had with a bear under the seat of her outhouse), and some level of preparedness is always prudent. That preparedness comes in the forms of both knowledge and actual physical tools for dealing with dangerous situations. You don’t have to be miles deep into a wilderness area to have a dangerous wildlife encounter, and often, these encounters seem to happen when people least expect it.

If it does happen to you, you’ll want to have as many options at your disposal as possible. A backup option like a firearm or even bear spray can help you not only by providing a last-ditch defensive tool, but these tools will also give you the confidence to avoid panic and approach the situation thoughtfully.

Every so often, one of these wildlife encounters is captured on video and makes the rounds on the internet (this actually happened to me a few years ago, more on that in a minute). Both of the following videos involving mountain lions popped up last year. The first is an encounter where a hunter scouting for elk in Colorado suddenly noticed a lion staring him down, very close, possibly exhibiting some predatory behavior.

According to the caption, the man drew a handgun and began calmly talking to the big cat and standing his ground. The cat decides to leave, which is the best possible outcome.

The second video (that you’ve likely already seen) is from the phone of a trail runner in Utah, who encountered mountain lion kittens on a trail. The situation that followed may have been avoided had he backed away quietly rather than move toward the kittens. Either way, he quickly found himself being aggressively followed and swiped at for roughly 6 minutes by the agitated mother lion. The runner sees no option but to retreat, shouting frantically at times. He made a good decision by not running away outright, and he eventually picks up a rock and scares the lioness away. But the situation could have just as easily turned deadly.

It’s easy to armchair-quarterback situations like both of these with the gift of hindsight. In reality, these two lion encounters can’t be compared, as they’re totally different situations. The principle, however, of having a means to defend yourself might have ended the terrifying situation much more quickly for the jogger. Maybe that would mean standing his ground initially; the cat would have broken off her charge, rounded up her kittens and left. Or if the lion had charged in full, maybe could have hit her with bear spray, or shot her before getting mauled. We can only speculate. In any close call, there’s often a very fine line between every critter involved walking away safely, and you getting mauled, stomped, or killed. Usually, the course of action that most likely ends with all parties unharmed is for you to remain calm and analytical, and that’s a lot easier to do when you know you have a backup option.

Years ago, I was sitting in a ground blind on a black bear bait when a big grizzly came in. I wanted to watch him awhile before spooking him off, but by the time I realized that he was following the scent I’d left with my boots, he was too close. If I shouted at him, he would reactively charge me and be on me instantly. I had left my bow on my lap and picked up my .375 when I saw him coming in, so I was ready. I figured my best option was to quietly speak to make him aware of my presence, then he would take probably a second to decide whether to charge or flee. He was behind a tree to my left when I realized what he was doing, and knew that he would be right in front of me before I’d have a clear shot if he did decide to charge. He stepped around a tree, three feet off the end of my muzzle. As quietly as I could, I mustered a “Whoa, bear. Get out of here.” He lifted his head, processing what was going on. I knew that at the first hint of a charge I’d have to shoot. He was too close. Fortunately, he ran off and I was left with a racing heart and a cool story. I’m not sure who was more scared, me or the grizzly. But I do know that having a backup option helped me keep my head.

Read Next: How I Survived a Double Grizzly Attack

Adequate preparation isn’t about flexing, being macho, or depending wholly on a tool to keep you safe. It’s about equipping yourself with options for dealing with encounters that you might have. You don’t necessarily need to go out and get a hand cannon, or tote a 12 gauge on your suburban jogs (though there are a variety of concealed carry options for joggers and hikers you might consider).

If you do decide to carry a self-defense tool, you should learn to be proficient and safe with whatever option you decide will work best for you. Even more importantly, you should always try to avoid conflicts with predators, and try to deescalate an encounter when you have one.