In Search of Wild Brookies in Papa's Paradise 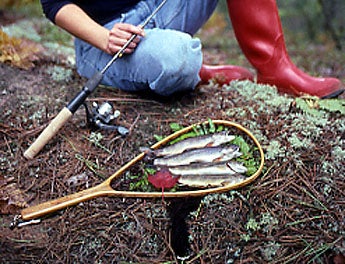 Over the ching, ching, ching of slot machines paying out quarters, I wasn’t sure I had heard what the young woman said.

“Have you ever been to Paradise?” she repeated. “I can take you there. You and four or five of your friends.” Hmmm. That was what she said.

Doug and I looked at each other, and then back at the Ojibway woman who had just made us the best offer we’d heard in three rainy days in Sault Ste. Marie, Mich. We nodded in unison and fondled our drinks.

“Meet me at the Yukon Inn tomorrow at 8 a.m. sharp,” she said. “I’ll bring a friend who knows the way. I promise you won’t regret it. Oh, and don’t forget your tackle.”

The Journey Begins
Early the next morning, three cars full of lonely outdoor writers sped west across Michigan’s Upper Peninsula. This was Hemingway country, doggone it, and we were eager for an adventure worthy of Papa himself.

It’s no secret that Hemingway moved the Big Two-Hearted River some 50 miles southwest to Seney in the story that bears that river’s name. Generations of anglers have tried to decipher Hemingway’s clues in search of Nick Adams’s huge brook trout, which might have been as fictitious as the river’s place on Hemingway’s map. That day, though, we were believers, and we were on a mission.

Paradise, Mich. (pop. 350), lies on the west shore of Lake Superior’s Whitefish Bay, about an hour west of Sault Ste. Marie. From there, it’s a short drive to the Big and Little Two-Hearted rivers, the Betsy and the East Branch of the Tahquamenon and their headwaters, all of which harbor brook trout. Any one of them would do, we decided, if our guides didn’t show up.

When we rolled into town, a battered red pickup sat in front of the Yukon Inn. Stephanie, our temptress from the night before, stepped out, wearing lipstick-red rubber knee-highs. Her friend, Sarah, wore conventional green boots, a plaid shirt and a broad smile.

“Are you guys certain you want to do this?” Sarah asked.

“Absolutely,” we assured her.

“Then I’ll have to blindfold you, because if my husband finds out where I took you, I’ll have to shoot you all.”

We swore we would never tell and begged off the blindfolds, then followed their truck out of town. Our caravan left the blacktop and bumped over sand roads and past camps of bear hunters to a dead end, miles from nowhere. There was no need to blindfold us-we were thoroughly lost.

“It’s a short walk from here,” they told us.

[pagebreak] Paradise Found
The faint trail led through ferns, then jack pines and finally a quarter mile of aspen forest before dropping down to a tiny, bourbon-colored stream barely 10 feet across, snaking quietly through the sand. We didn’t ask the ladies what river this was, so we wouldn’t have to lie later.

Most of the group followed our guides downstream, while Doug and I went upstream. We had brought an assortment of ultralight spinning rigs loaded with 4-pound-test mono. I took a box of tiny Mepps and Panther Martin spinners; others had small bait hooks and red worms.

Thick alders and buck brush overhung the river, so I stepped into it, casting spinners to each bank as I waded. The shallow riffles were fishless, but here and there a small brook trout dashed out from an undercut. I caught several, but none bigger than 6 inches or so.

Farther upstream, the river grew smaller and shallower, so we turned around and caught up with the rest of the gang by a deep hole downstream. Sarah smiled and pointed to three 10-inch brookies that lay on a bed of ferns. The guys sat on the bank, watching the show.

Stephanie flipped a red worm into the riffle at the head of the hole and let it tumble into the slow, dark water. Her line twitched and she set the hook on another nice brook trout. In water up to the ankles of her red boots, she slid aa hand under the trout and lifted it out of the water.

I begged a No. 10 hook and a red worm. Just downstream, the river gurgled under a big log, then slowed in another deep hole. On my first cast, I landed an 11-inch brook trout. Then a bigger fish wrapped my line around a root and broke off. Was it frayed from all the brush in this tiny stream, or had I tangled with a descendant of the monster trout that Nick Adams lost nearly a century ago?

All morning we caught chunky, native brookies up to a foot long. We kept only a few for a meal. Sarah’s husband might get suspicious if he found someone had cleaned out his favorite trout hole.

Later, after our guides led us back out of the forest and to the vehicles, we headed to the Yukon Inn for a meal of buffalo burgers. Sarah had just one question for us. “Will you want to go with the guys anymore, now that you’ve been to the woods with two women?”

How would Hemingway have answered her, I wondered?