How to Catch Trout on Soft Plastics

Spoons and spinners are great, but don’t overlook these new-school bass lures for monster browns 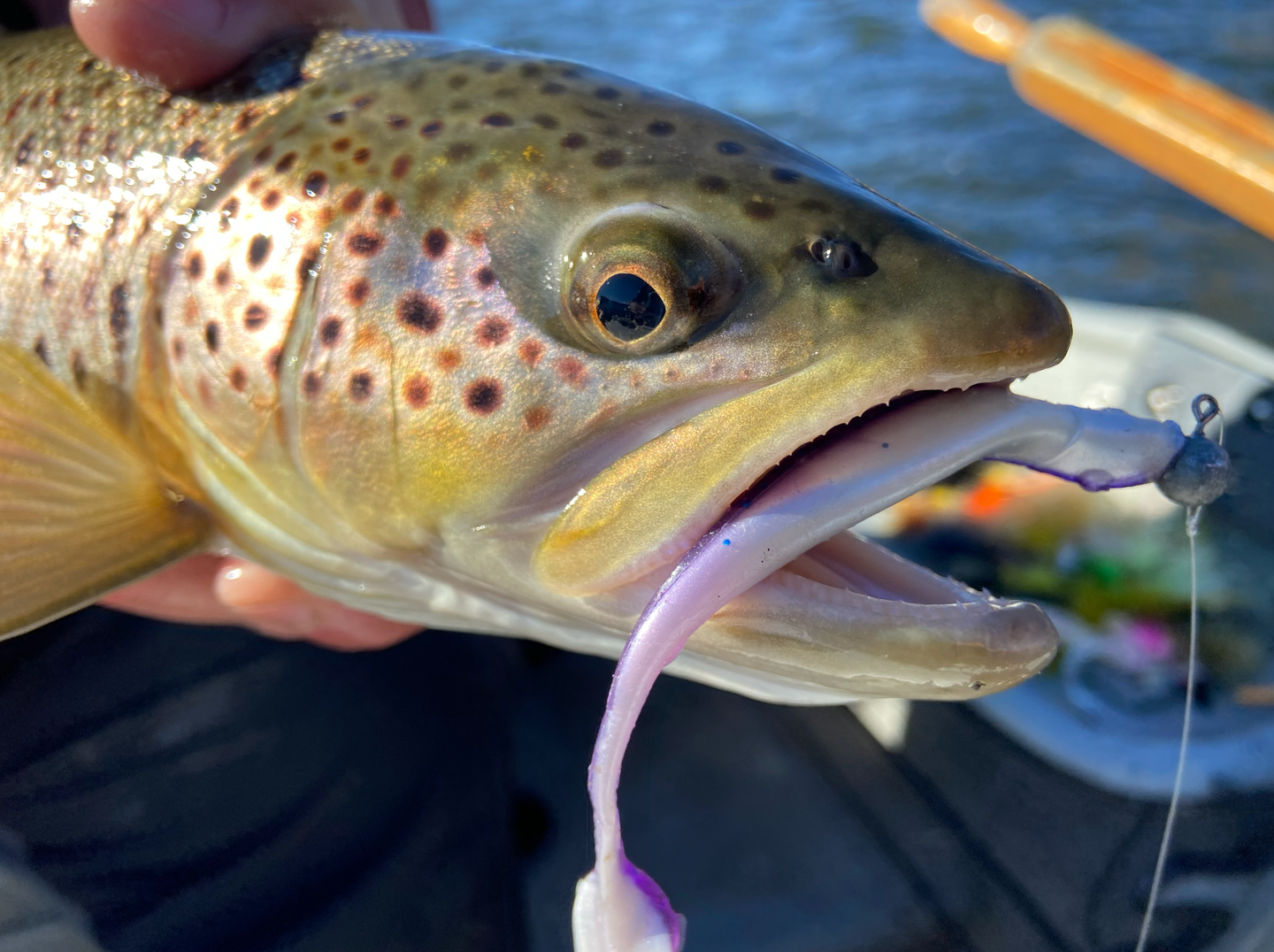 In-line spinners, spoons, and hardbaits get all the love in the trout game, and rightfully so. These lures have been punishing browns, rainbows, and brookies for many decades. As the old adage goes, if it ain’t broke, don’t fix it, and there’s nothing to fix with any of those lures. There is, however, a new category of trout baits worth adding to your kit. Soft-plastic lures are arguably evolving faster than any other lure genre. Though they’ve been around a long time, there weren’t as many styles that would appeal to trout in the 1980s and 90s as there are right now.

Here are three of my favorite soft plastics for trout. Using them will let you show your local trout some presentations that the average in-line spinner chucker can’t replicate, which equals more fish for you.

Soft-plastic swimbaits have become ubiquitous across practically all fisheries. There’s no predator species on the planet that won’t take a swing at one of these baitfish imitators, and that includes trout. In fact, in stained water, the thump produced by a paddle-tail swimbait can draw more trout strikes than traditional plastic and metal lures, but the caveat is that you must choose your trout swimbaits wisely.

Trout have relatively small mouths compared to other baitfish-gobbling species. Even small bass and pike, as examples, tend to open wide and inhale their prey, which means you can often catch them successfully on slightly oversized swimbaits. Trout, on the other hand, are used to eating smaller meals like bugs, so when they decide to make a move on a baitfish, they tend to quickly swipe at it and just “taste” it with a partially opened jaw. Granted, big trout will suck it right in, but to avoid missing smaller fish, opt for swimbaits with thin profiles.

My favorite is the 4-inch Keitech Swing Impact, though I’ve also had a lot of success with YUM’s 3 ½-inch Pulse Swimbait. Both of these lures have a slim body, so there’s less bulk for trout to get their mouths around, but the ribbed flanks and paddle tails still produce plenty of vibration. I’ll pair my swimbaits with a slightly smaller jighead than recommended, and I lean on what are sometimes referred to as “quick strike” jigheads. Their hooks bend at a sharper angle, which creates less gap between the hook and the bait’s back, helping increase the odds that a glancing blow from a trout will result in a connection.

You’d be hard pressed to find a bass fisherman anywhere in the country who doesn’t have a healthy amount of soft-plastic tube baits in their arsenal. These hollow, skirted jigs can represent a wide variety of forage depending on the color you’re using. In brown, orange, and olive, they are one of the best imitators of a live crayfish ever made. These crustaceans are a favorite food of largemouth and smallmouth bass, but trophy brown trout slurp them up, too.

Trout munch crayfish all season long, though they often key in on them the hardest during the fall and winter when aquatic bug activity wanes. The fun part about fishing tubes for trout is that little fish aren’t usually as keen to go after a 3- or 4-inch live crayfish, so when you do feel your bait get sucked off the bottom of the river, it’s usually a pretty hefty trout on the other end.

The Strike King Bitsy Tube in pumpkin-green flake is the bait I lean on most often for trout. At 2 ¾-inches, it’s a little less of a mouthful but still big enough to represent a full-grown crayfish and entice the heavy hitters. Like swimbait heads, use the lightest tube jighead you can get away with to tick the bottom. Trout streams and rivers are generally shallower and rocky, and too heavy of a head will result in a less natural presentation and a lot more snags.

There’s no wrong part of a river to fish a tube, though they shine in areas with slower current where the bottom is made up of larger rocks and silt or mud. This is simply because crayfish gravitate to these areas, often avoiding fast current, and trout will move into these locations looking for a crunchy meal.

Drop shotting is rooted in the bass world, and the technique was developed to fool pressured fish and sluggish fish in colder water. The rig starts with a drop shot weight at the end of your line. A few inches to a foot above the weight, a dropper loop in the leader creates a short arm perpendicular to the main line. This short arm holds the hook and a soft-plastic lure, and the idea is to keep this rig shaking in place, allowing the lure to dance and quiver, until a non-committal fish decides to strike. The technique is practiced most often from a boat so you can drop straight down, but in the right situation, drop shotting is highly effective on a trout stream.

You know that deep, slow hole on your home river? The one where you think the biggest, wisest trout live—the ones that rarely make a mistake? Drop shotting is how you’re going to fool them. Instead of working lures through the hole, which forces fish to move and chase, drop shotting lets you keep a bait in the zone long enough to entice a bite via action or by goading territorial trout into striking just to kill the intruder.

Almost any slim profile soft-plastic in the 2- to 4-inch range can work on a drop shot rig, but I’m a big fan of LIVETARGET’s Ghost Tail Minnow. I’ll pin the bait right through the nose with a size 1 or 2 drop shot hook, cast my rig up current, and let it settle into the hole. Once I know it’s firmly planted on the bottom, I’ll gently shake the rod tip to get the bait twitching. After 30 seconds or so, I’ll lift the weight to advance the rig down the pool and start again. When a big trout hammers a drop shot bait, you won’t miss it.