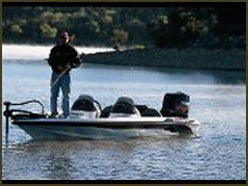 We had plenty to learn about fishing with them. Those who were not willing to experiment with superlines and get used to their peculiar characteristics bad-mouthed them and went back to nylon. Pro fishermen didn’t give up so quickly, however, nor did line makers who saw the promise that superlines held for those who deal with specific fishing problems on a regular basis. The end results of pros’ input and manufacturers’ persistence are new superlines that perform much better.

TOO MANY PROBLEMS
As noted, first-generation superlines came packaged with some inherent weaknesses that have since been fixed.

Poor Knot Strength Knots tied with superlines had a poor performance record. They often slipped, and many knots broke under stress well below label ratings.

Wimpy Body The small diameter and formlessness of superlines resulted in line digging into the coil on the reel spool under pressure, making backlashes and damage to the line more likely.

AbrasivenessThe original superlines were made of abrasive materials, and their friction against other surfaces limited casting distance.

One of the first attempts to fix casting problems was to coat superlines. Such coatings came off. Manufacturers now work with different materials and impregnate each strand of their braids with Teflon or some other polymer. Some incorporate specialized bonding techniques.

The new supers are tough and don’t deteriorate as quickly as nylon. They are rounder and stay that way, which means easier handling and casting. Some of the new lines are even thinner than before due to tighter braiding and new materials. Their thin diameters offer little resistance to diving lures, so the lures are better able to reach their potential maximum depth.

SPOOLING TRICKS
As you examine the various new superline brands in a store you’ll notice that some feel softer and thinner than others. Stiffer lines are more difficult to use on spinning reels, but fine on bait-casters. Consider how you’ll be using your line when deciding which to buy.

Before spooling, either wrap the reel spool with a layer of compressible tape or, better, wind 15 to 20 feet of mono onto your reel first. Connect the superline and the mono backing using a Uni knot. A Palomar knot is fine if you tie superline directly to the hook or lure.

Fill the reel spool to within 1/8 inch of the lip, but no more than that. If you’re casting a braid with a spinning reel, close the bail as the lure touches down, then pull on the line against the drag to assure tight spool wraps.

Superlines don’t stretch. It doesn’t take as much oomph to set the hook securely. If you’re using fairly stout line, it’s also easier to break off the tip of a graphite rod if you screw down the drag to no-slip and set a hook as you would if you were using mono.

TRY THESE NEW LINES
**Bully Braid **This line is braided in cylindrical shape and has superior knot strength and no memory. Anglers who favor truly limp lines will like this one. (Triple Fish, 314-706-4227) FireLine XDS The fused line combats fraying and casts beautifully on levelwind reels. It’s fairly stiff for spinning reels. This is a great line for heavy fish-it casts far and behaves on the spool. (Berkley, 800-237-5539)

PowerPro Microfilament This limp Spectra-based braid casts well andd gives few whip-knot problems. Fifteen-pound-test has about the same diameter as 4-pound-test mono. (Innovative Textiles, 800-650-8003) ** PRT Braid** Fins, the maker of this line, went hard after the knot-strength problem with its Polymer Reinforced Technology (PRT). The result is a braid that accommodates a broad range of knots. (Fins, 800-443-0373)

Spectrex IV **Manufacture of this line incorporates a reinforcing resin system that increases tensile strength and makes the braid more water-resistant. (P-Line, 415-468-0452) **Spiderwire Stealth **The upgrade in this ultra tightly braided line is Teflon pressure treatment that makes the line slicker and quieter. Pure Fishing touts the round configuration that maintains its integrity. The line is fairly limp, packs nicely on the spool and casts well. (Pure Fishing, 877-777-3850) **Stren Super Braid Stren treats the fibers of this braid with a special resin that results in a line with a small diameter and a slick round body. It works equally well on spinning reels or casting reels. (Stren, 800-243-9700)