2 Killer Late-Season Rigs for Big Pike Through the Ice

These rigs will work no matter where you fish 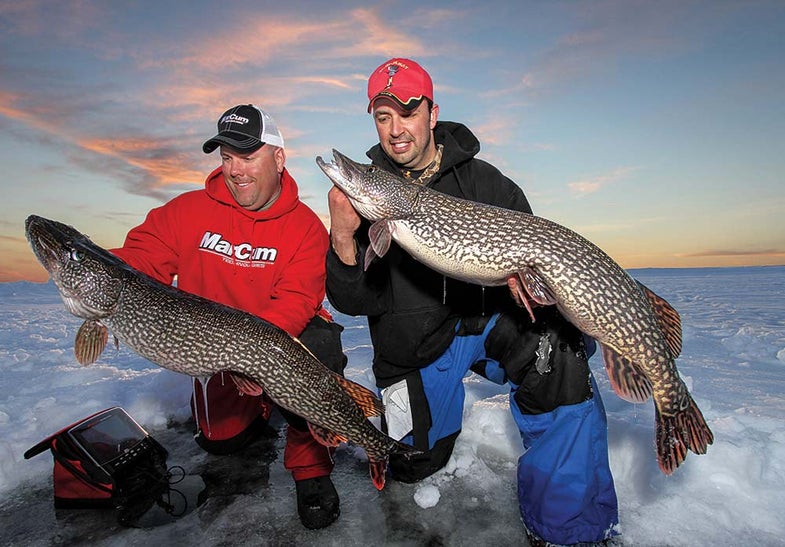 If a picture is worth a thousand words, a photo of Bryan Sathre’s icefishing spread would be a boring novella—a couple of drilled holes, tip-ups, and a lawn chair. If you’re lucky, you might catch a quick pic of him as he runs down bites from a 40-inch pike. “North Country redneck gator chasing” is what the Minnesota guide calls it, but don’t be fooled by his wry wit. He takes his pike fishing seriously and has learned how best to tweak his presentations late in the icefishing season to make the big fish bite. Here’s a closer look at two of his go-tos and how you can deploy them to land more pike no matter where you fish. Note: They work great on pickerel, too.

Lipless crankbaits have burst onto the hardwater scene, and Sathre has been fishing with them for late-ice pike for the last few seasons with great success. He recommends Rapala’s Rippin’ Rap (size #7) and Northland’s Rippin’ Shad (size 5/8).

But don’t just buy the bait and start fishing it. Sathre downsizes the rear treble hook one size smaller to give the bait a more erratic action when it’s jigged. Additionally, he pinches the barb on the tail treble and slips on a colored bead that matches the overall color scheme. If he is fishing a glo-colored bait, for example, he will add a glo-colored bead. If he’s fishing a plain gold-colored bait, he’ll add a gold bead. With the bait modified, he ties it straight to 30-pound-test braided line. Using braid allows him to set the hook without any stretch, and to land even the largest pike. A medium-heavy to heavy rod helps provide plenty of action to the bait.

Read Next: How to Catch Monster Late-Winter Pike

According to Sathre, a modified quick-strike rig fished below a tip-up is extremely deadly for late-ice pike. This rig looks like an upside-down Y, beginning with a barrel swivel. From the swivel, he rigs two leaders, ranging from 4 to 12 inches long. The leaders can be titanium, steel, or 50- to 60-pound-test fluorocarbon. He finishes the rig with a blade, bead, and 1/0 treble hook.

“These fish are aggressive,” says Sathre. “You are not finesse fishing. They are destroying the rigs, so heavier is better.

Sathre baits the rig with herring, ciscoes, smelt, sucker minnows, or golden shiners—one treble behind the head and the second halfway between the dorsal fin and tail.

When fishing with frozen bait, he lets it thaw for 24 hours so that the bait provides an oily scent trail. He recommends changing the bait after every catch or every couple of hours to keep it fresh, and he tweaks leader lengths according to his bait. For 8-inch baits, he like leaders that are 4 inches long, and for 12-inch baits, he likes 8-inch-long leaders.

Mason’s ice-free tip-up line is a vinyl-coated braided Dacron that’s perfect for tip-ups, according to Sathre. It won’t cut your hands and it’s strong.

He is also particular about his tip-up spools. “I try to find tip-ups with high spool capacity,” he says. “I don’t lose nearly as many fish in the time that it takes me to get to them.”