How to Catch Big Fish from a Kayak 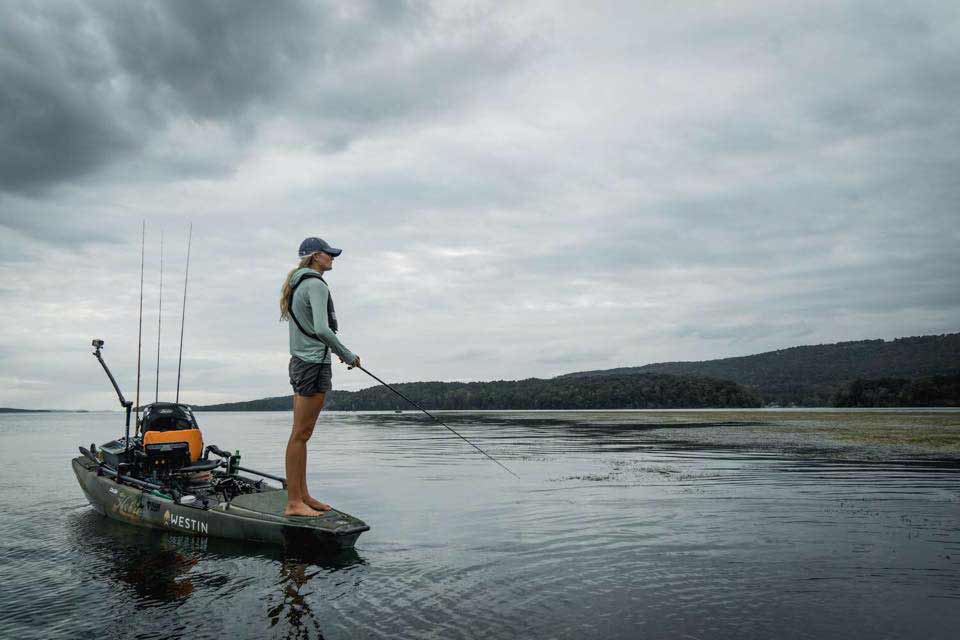 A good fishing kayak needs to have a wide deck for better stability. Kristine Fischer
SHARE

When I first read The Old Man and the Sea, I was captivated by the sheer adventure of it all. A man alone at sea, whose small wooden boat suddenly was at the mercy of the monster on the end of his line. I hung onto every one of author Ernest Hemingway’s words as he brought me along on that riveting tale.

I chose to kayak fish for the experience. When you strip away the comfort and convenience of a boat with 250 horsepower, you’re left with a better connection to your surroundings. Being that close to the water means you’re closer to the action. It’s similar to having a front-row seat at your favorite show. Whether you are navigating through the mangroves in hopes of tangoing with the silver king or maneuvering your kayak around rows of shallow cypress stumps, sight fishing for fat largemouth bass, it gives you an unparalleled sense of intimacy and appreciation. Kayak fishing is something every outdoor enthusiast should try, as it truly is a remarkable way to experience the sport—if you hook into a big enough fish, he might take you on a sleigh ride, like the giant marlin did to Santiago in Hemingway’s novel.

I’ve been in relentless pursuit of big fish from my kayak for nearly eight years. My obsession has taken me from Florida, chasing pelagic fish to Oregon for pre-historic marvels. Oftentimes, I’m met with raised eyebrows and concerned expressions from other anglers: “You caught a sailfish in THAT?” “You’re out here fishing musky on Lake St. Clair in a kayak?” And my personal favorite: “That’s crazy. You’re lucky you haven’t flipped.” Hooking into big fish from a kayak has its challenges, but so does fishing from a conventional boat. In a kayak you can get into places you might not be able to otherwise. I love it. It’s MY way of fishing, and you can do it too. Here is how to get started.

Kayaks come in all shapes, sizes, and prices, but there are a few “musts” you need to pursue big fish. Stability comes first. I need a kayak that is not only large enough to handle big water, but also stable enough to stand in and work large baits. My Hobie Pro Angler is 38” wide, and 13.10’ long, providing me adequate deck area to comfortably stand, and enough stability to hook, fight and successfully land big fish. Just know, even the most stable kayaks can tip. Keeping your spine in line with the center of the kayak can help prevent an accidental flip. I would also recommend looking at a kayak with a pedal drive system as opposed to paddling. Having the ability to hold your position in wind, current, or when fighting a fish gives you an advantage on the water.

You will want to have the same tools, rods, and dip net in a kayak that you would on a johnboat. You don’t get to use the excuse that you have limited space for the equipment meant to ensure your safety and the health of the fish should you need to release it. Some species, such as musky and pike, have lower mortality rates when mishandled, and anglers should always educate themselves prior to targeting any fish they haven’t had much experience with. I always have a set of hook cutters and long-nosed pliers, and a net that is large enough for the fish to remain in the water while getting a camera ready.

I encourage anglers to practice catch-and-release when it comes to trophy fish. Putting those fish back into the fishery keeps genetics thriving, and more importantly, you are giving future generations a chance at a fish of a lifetime. For those wanting more than a picture, consider a replica mount as they won’t deteriorate or lose color over the years.

As with anything, being prepared not only improves your chances of a successful trip, but also helps ensure you’re able to take care of both yourself and the target species. Going after a different caliber of fish requires a different mindset. Trophy fish typically behave differently and are more susceptible during certain times/conditions. When I’m planning a trip, I consider a variety of factors, including time, location, and weather.

Time: Understanding the behaviors and characteristics of your target species is crucial in your planning, so that you can be in the right place at the right time. This includes learning the spawn, migrations, and seasonal transitions. For example, some of my favorite times of the year to go after trophy musky are late fall and late winter/early spring, when they are in predictable areas, feeding heavily in preparation for winter and/or the spawn. Knowing the time of year big striper run up the river, the bull reds move into the marshes or when the tarpon run is on is all vital information you need to know to be successful.

In addition to the time of year, I always reference the moon. My fall trip on Lake St. Clair is always planned around the new moon, weather permitting. A full moon means fish are spawning, and many anglers treat the solunar charts (which predict activity in all living organisms in nature) as the “angler’s gospel.” I’ve witnessed enough action during these major and minor times to believe in these theories as well. Having an app on your phone such as iSolunar will tell you when the moon is over-head, underfoot, etc. When these times coincide with a sunrise or a sunset, I put myself in a big fish spot.

If you don’t know, two majors and two minors occur every 24 hours relative to moon (and to a lesser extent sun) position. Majors are periods of 60 to 90 minutes when the moon is over or under. When the moon is midway between two majors, minors take place. They are shorter, typically 30 to 45 minutes. These are all times when fish are likely to be on the bite, and experienced anglers pay close attention to when these events occur.

Despite reading many seasoned anglers’ testimonies, I needed to see this fish behavior to actually believe it. On a balmy fall day fishing Lake St. Clair, I was with a crowd of about 10 boats vertical jigging for musky in the mouth of one of the rivers. I hadn’t seen any boat reach for a net all morning, and also hadn’t seen a fish. Just a few minutes before 11 a.m., I heard one of the boats call for the net. Then another. Then another. About 10 minutes later, my rod doubled over. It was as if someone turned on an imaginary light switch. In a three-hour time frame, I witnessed about 30 musky get caught, including two I reeled in. Shortly before 2 p.m., the bite turned off. Though I personally believe that the esox species tend to be more directly affected by moon phases, my extensive tournament fishing has revealed other fish exhibit similar tendencies. At check-in, I almost always learn that all across the lake, the bite was good from 8 a.m. to 10 a.m. before it shut off, or that the late afternoon bite produced some big culls. Most times, those bite windows have lined up with majors or minors.

Location: When I lived in Nebraska, our state was very limited when it came to bodies of water that held musky. We had three very different lakes that were within 2 hours of home. I first looked at the stocking reports to learn when musky were introduced into the ecosystem, how many, size, when stocked, and whether or not re-stocking efforts were made. Secondly, I checked the reports. Nebraska puts out an annual report that gives anglers a rough idea of size and the percentage of said size. For example, Lake 1 showed a large population of musky 28” to 33”, Lake 2 showed average volume with a better chance at a 40” plus fish, and Lake 3 had an overall lower percentage of musky, but gave anglers a chance at a 50” plus fish. I wanted to catch big fish, so 90 percent of my days were spent on the water where that was most likely to happen. It left me with blistered hands and a bad sunglasses tan (and no musky), but I wouldn’t trade those days for a few smaller fish. In order to pursue trophy fish, you have to take the mentality that you’re not after 20 bites, you’re after one.

Weather: For years, I’ve kept a logbook of my musky trips, and many trophy fish catches. I’ve noted not only what moon phases tended to be productive, but weather patterns also. Understanding how fish behave on high-pressure days versus prefrontal days with dropping barometric pressure is key. Fish tend to be active before major storm systems move in and are notorious for being a little more “tight lipped” on those post front days. That isn’t to say big fish can’t be caught during this time, but I know when I see those ominous, dark clouds moving in, it’s time to get in the boat.

Other weather factors I consider are the wind and sun. Particularly during the spring when I’m wanting warmer water, I look at the northern most pockets that are generally protected from the north winds, and also areas that get the majority of sunlight throughout the day. Also, high winds tend to corral baitfish up against shorelines and points, giving predators a prime opportunity to feed. I use the sun to not only seek out warmer water, but also to locate shadows. Oftentimes, fish use shadows to escape the heat of a hot July sun and to ambush prey. This is why I make sure to flip a few extra casts at the shady sides of the trees when I’m working an area. Paying attention to these factors will help you understand how fish set up and increase your chances of catching them.