The Tokyo Rig Is Taking the Bass World by Storm 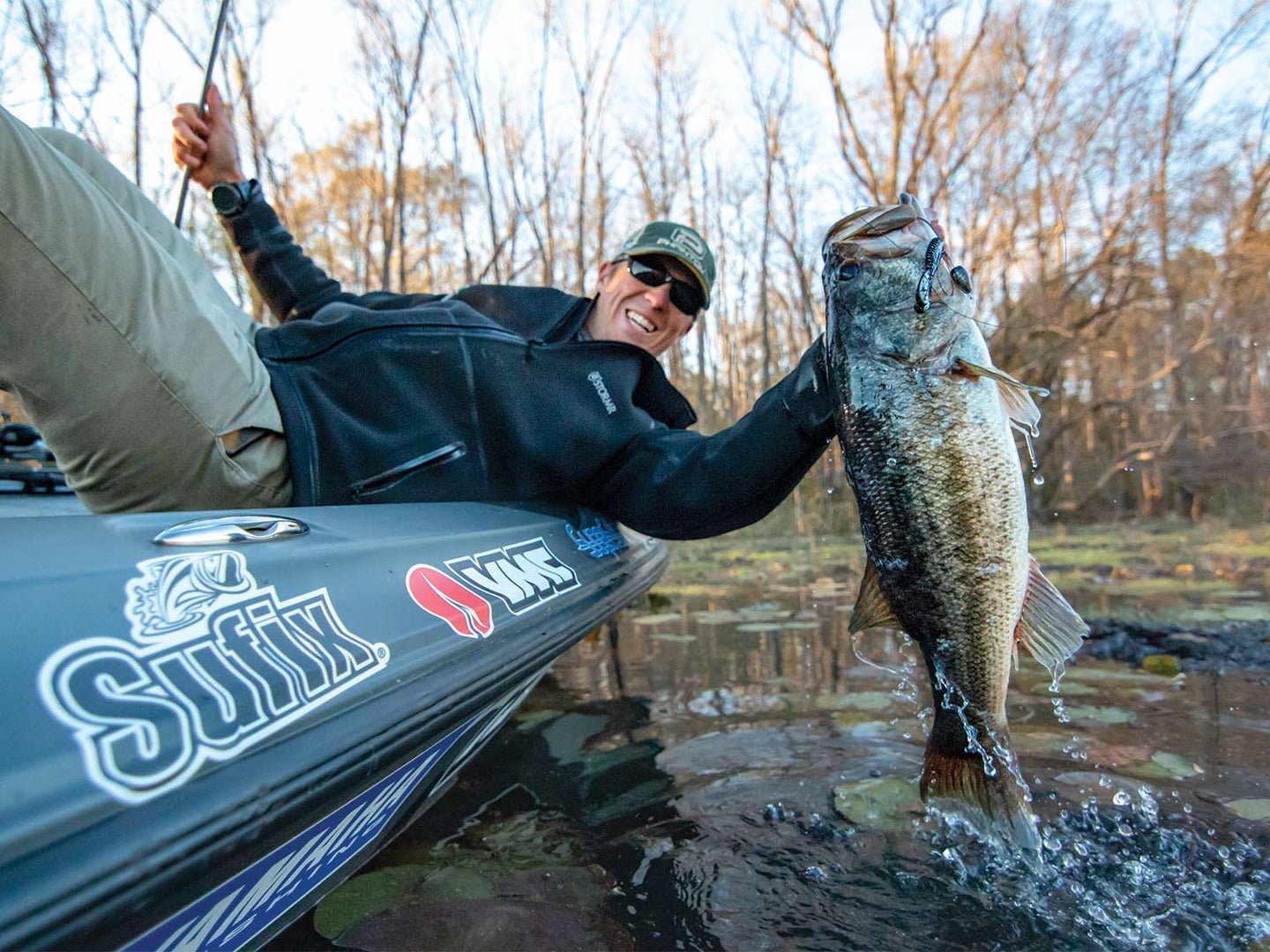 It’s not that bass pro Mike Iaconelli had an issue with being outfished; he just wanted to know why his Japanese host was smoking him, like 4 to 1, during a 2017 trip to Tokyo’s famed Lake Biwa. Frustrated and curious, Iaconelli confiscated his host’s rig and found something he’d never seen—a leadered punch shot. This became the inspiration for his collaboration with VMC hooks, and three years later, they introduced the aptly named Tokyo Rig.

VMC’s proprietary model consists of a welded ring that links a rolling swivel line tie, a technique-specific hook (wide gap, flipping, or worm), and a 2 1⁄2-inch leader connected with another rolling swivel. Slip a weight onto the leader, turn the tip 90 degrees to prevent slippage, and you’re ready to fish.

The Tokyo Rig is different from earlier punch shot forms that linked the suspending weight directly to the connector ring. Also known as the Jika Rig or Jig Rig, this predecessor lacked the Tokyo Rig’s distinguishing leader.

“When I first saw this rig, I thought, This is going to be a great tool for punching, flipping, and fishing deep grass,” ­Iaconelli says. “Back then, I never saw the potential for it in a lot of other places, but it really has become a versatile technique.”

Case in point: During a 2018 Bassmaster Elite event on the ­St. ­Lawrence River, Iaconelli was looking for something between a ­finesse-y drop-shot and a powerfishing wobblehead jig presentation for targeting deep smallmouth bass in swift current. Rigging a ­Berkley Powerbait Jester creature bait on a Tokyo Rig with a 3⁄4-ounce VMC tungsten weight enabled him to fool big smallies by mimicking the gobies and crayfish scurrying over the rocky bottom.

“That rig let me maintain bottom contact, ride through those rocks and snags without getting hung up, and present the bait off the bottom,” he says. “I didn’t get as many bites as I did with the drop-shot, but when I got bit, it was the 4-plus pounders.”

How to Fish it

With the weight entering the cover first and pulling the bait along the same course, flipping and pitching requires a relatively lighter form. Similarly, indirectly linking bait and weight allows anglers to deliver smaller baits in deep water, with less weight than a leadhead presentation would require.

Rapala’s Dan Quinn, who was ­instrumental in the Tokyo Rig R&D, explains: “With an ounce weight, you can fish a 3-inch swimbait in 30 feet of water and it stays on the bottom. With a jighead or anything that has a direct tie, you lift that weight up [on the retrieve], but with the Tokyo rig’s weight suspended below, it’s the ultimate deepwater delivery system.”

“When you’re fishing matted grass with clumps of lily pads, you’ll have to throw your bait into a hole the size of a 5-­gallon bucket,” says ­Walters. “You have to stay way back to avoid spooking fish, so when you cast a Texas-rigged bait into the hole, it’s a pendulum effect and, a lot of times, the bait will glide out of the hole and you’re wasting a cast. When you cast a Tokyo Rig, the bait goes straight down and it sits right where it landed.”

In any scenario, holding a bait above the bottom maintains visibility more than a jig or Texas rig, which may disappear into muck or silt. The ­Tokyo rig also keeps your bait free of debris or sticky bottom algae. Less time cleaning baits equals more time fishing.

And don’t overlook the Tokyo Rig’s commotion characteristic. Using that weighted stem to pound the bottom and stir up muck imitates a foraging baitfish.

With the weight and bait separated, fish tend to get hooked deeper in the mouth. Plus, you don’t pop the fish’s mouth open on the hookset—­which often happens with heavy Texas rigs. So when you do strike a giant bass in deeper water, you’ll land him.