Catch walleyes while fishing night crawlers at a crawl. 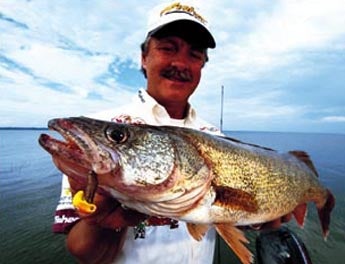 You’d think it would be impossible to innovate upon a rudimentary rig of hook, line and sinker. But leave it to a confederacy of Dakotans, hard-core guides and tournament pros based on the Missouri River reservoirs to tweak the components and devise a very specific setup that gets medieval on walleyes.

The technique’s name, “Slow Death,” captures the essence of its deliberate approach and ultimate effect on walleyes. “The technique started evolving a few summers ago,” says Slow Death originator Dave Spaid, who has won several tournaments, including four South Dakota Governor’s Cups, with the outfit. “When the days got hotter and slicker and the fishing got slower, we cut off the spinner, left on a bead ahead of the crawler, and slowed down. That’s how we caught all our fish. Since it’s Outdoor Life that wants to know the details, I’m spilling the beans.”

Down to Basics
Since the early ’90s, Slow Death has been a tightly held secret of Spaid’s and his confidants on the pro walleye tour. The basics of the system are de rigueur wherever walleyes are found-a bottom bouncer, a leader and an Aberdeen hook with a night crawler. But what Spaid and his cronies do with them, paying close attention to speed and incorporating spin into the rig, elevate the ABC’s to an altogether different plane.

“Slow Death allows you to put a bait in the cracks, crevices and little places you couldn’t go with a spinner blade,” says Spaid, a guide on lakes Sharpe and Oahe. “With a blade, you go too fast to get into all the important corners that hold fish. You can fish this rig slow and pick off fish you couldn’t if you were using anything else.”

The essentials to the system are specific. Although the general guideline for bottom-bouncer weight with spinners is 1 ounce for every 10 feet of water depth, Spaid goes with 1 ounce for water up to 20 feet deep and fishes a 1½-ounce bouncer as deep as 60 feet. The reason is the slower paces Spaid sticks to instead of typical spinner speeds of 1 to 1.3 mph. For the weight, Spaid insists on a V-shaped wire-armed bottom bouncer such as a Northland Rock-Runner, which supplies key motion and sound when ticked across bottom. To the business end of the bouncer, Spaid adds a ball-bearing swivel to eliminate line twist, then ties a 3½-foot leader of 8-pound-test Maxima monofilament, a strong, abrasion-resistant line. Next comes a No. 1 or No. 2 Tru-Turn Aberdeen-style hook, the requisite component to Slow Death.

With an S-shaped bend just below the eye, the Tru-Turn inspires the crawler to spin, a deadly action not normally associated with live-bait presentations. In fact, Spaid usually pinches the crawler off behind the collar and then threads it up the line so about an inch of crawler tail extends beyond the bend of the hook. To keep the crawler in place, Spaid leaves a Â¼-inch tag of monofilament at the knot and, as the piece of worm is worked onto the hook, the mono helps it to stay put. A colored bead goes ahead of the knot for added attraction.

Putting It Together
Spaid says the size and profile of the crawler, along with the spinning action, are key. When rigged in the style of Slow Death, the crawler is about 4 inches long, the same length as both baitfish and many of the most effective walleye lures. Besides, the pinched-off crawler may exude more scent. When Spaid puts the crawler in the water and eases along with his bow-mount trolling motor, he watches the Slow Death rig to be sure it’s properly tuned-that is, the crawler achieves a subtle but certain spin.

“The Slow Death scenario is odd because it gives the crawler a weird action,” says friend and powerhouse pro Gary Parsons, who learned the method from Spaid. “Basically you’re using a curved hook, a bead and half a crawler. It kind of lurches like a jig behind the ‘thunk’ and ‘tunk’ of the bottom bouncer.”

To Spaid’s aas well as Parsons’ way of thinking, the wire arm on the bouncer provides another critical element-sound. When slow-trolling, the bottom bouncer ticks and clicks rocks to supply a measure of attraction.

Beyond the tenets of spin and sound, Slow Death and its speed-or lack thereof-lets you put the bait into the hidey-holes that would otherwise be impossible to reach. A crankbait, even on leadcore line, will pound bottom and then whisk above the heads of walleyes when the bottom dips. A spinner will similarly miss critical corners and pockets. That’s where Slow Death, a more deliberate means of targeting precise spots and keeping a bait on bottom, figures in. For instance, Spaid says, you can ease up a sheer point in the Dakotas, one that rises out of dozens of feet of water before cresting at 6 or 8 feet, and keep the crawler in the zone at all times.

Insufferably slow is not the be-all and end-all of triggering walleyes. Pro Rick Olson, another convert to Slow Death through the acquaintance of Spaid, runs ½- to Ã‚Â¾-ounce bouncers between 0.5 mph and 1.0 mph, the latter approaching normal spinner speed. For his part, Spaid usually runs his Pinpoint trolling motor on a setting of 2.5, which he suspects approaches similar speeds. A good indication that the speed is right is when your line trails behind the boat at a 45-degree angle. But unlike other live-bait rigs, Slow Death gives you the ability to go slow or kick it up a notch to cover water- if you keep that 45-degree angle, your bait will be running right.

Power Tackle
With two rods per angler, you cover a wider swath with more lines. For a rod in a holder, Olson prefers an 8½-footer with a soft action. With it, you wait until the rod loads up with a fish on the other end before you set the hook. A hand-held rod around 6½ to 7 feet long is about right. Both rods should have enough backbone to handle up to 1½ ounces of weight. Many of the appropriate rods, including those from Bass Pro Shops and Berkley, are labeled as bottom-bouncing rods and have the right actions for spinners and Slow-Death system.

“Slow Death is not an everyday thing people do,” says Olson, who is based in Mina, S.Dak. “A lot of people around here fish with a bouncer, a bead and a hook and crawler. If you do it that way or do it with Slow Death, it’s all very simple-it’s as simple as not letting too much line out.”

Another aspect of Slow Death that makes the method excel in clear water is the level at which the bait runs. Unlike walleyes in dark-water rivers that pin themselves to the channel, fish in the clear waters of the Dakotas through the Midwest often hover 6 to 8 inches off bottom-the same height at which the half crawler levitates behind the bouncer. With the single hook and a bit of crawler trailing behind the bend, hookups are more solid than with a live-bait rig and a walking sinker. Compare Slow Death to a Lindy Rig, where you have a nose-hooked whole crawler and need to feed a fish line forever before sending the hook home. With Slow Death, you feel the thump, drop the rod back for a moment and set the hook.

Now the secret’s out on Slow Death. Because of their ingenuity, a handful of Dakotans have shown us a technique that is at once slow and lethal-the right combination for crafty, temperamental walleyes that would otherwise keep their mouths closed. Give Slow Death a try this summer to speed up your catch rate.