Slow Down for Walleyes 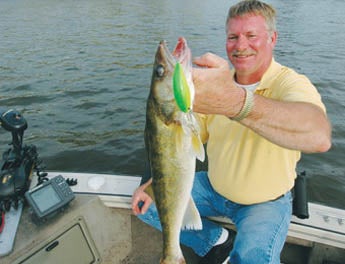 Jim Berger, a Pennsylvania fisherman, has developed an offbeat method of deep-cranking that absolutely slams walleyes in flowing water. And it’s not a difficult technique to master. Here’s the lowdown on this productive fishing method.

Depth Charges
A 30-year walleye fanatic, Berger refined his unique approach while fishing the Ohio, Allegheny and Monongahela rivers, which join at Pittsburgh. On a typical fishing day, Berger’s crankbaits will dredge up four to five walleyes that weigh between 3 and 4 pounds apiece, not to mention numerous smaller fish whose appetites are almost as big as the jumbo bass lures that Berger favors. In an average year, he lands 8 to 10 walleyes that weigh 8 pounds or more.

Berger’s deep-cranking technique is aimed at walleyes that are feeding in moving water from 15 to 25 feet deep. Arm strength is required, because Berger’s fishing approach is physically demanding, sort of like trying to crank an old-fashioned Bomber plug up-current in a raging river.

Berger’s basic rig consists of a 2- to 3-ounce egg sinker 5 feet up the line from a deep-diving walleye crankbait. Essentially, it’s a Carolina rig, except that instead of using a barrel swivel to keep the sinker separated from the lure, Berger pegs the sinker in place with a toothpick. He runs the line through the sinker, around it and then back through the sinker’s hole a second time. Then he pegs it with the toothpick and breaks off the excess.

When he gets in position, Berger rockets the heavy combination into the distance with a stiff 7Â½-foot flipping rod matched with 10-pound-test Berkley FireLine. The superthin line knifes through the water and allows the sinker and crankbait to get deep quickly before the current sweeps them off target and down the river.

The heavy sinker can pull any live or artificial bait to the bottom, and Berger has tried every walleye bait or lure in the book. Trial and error has taught him that deep-diving crankbaits catch the most fish. He has his best luck with silver and gold patterns when the water is clear, and with chartreuse patterns when heavy rains stain or muddy the water.

“I think walleyes like crankbaits better than anything else,” says Berger. “The deep divers work best behind a heavy sinker because they really grind the bottom. If you’re looking to catch walleyes in the current, you have to be on the bottom where the fish hold.”

Berger discovered his most productive crankbait, the Ã‚Â¾-ounce deep-diving Yo-Zuri Magnum, in a bargain bin at the local outlet of a major sporting-goods chain. Although the lure is considered a bass plug, Berger wanted to go after walleyes big enough to consider the Magnum an average mouthful. So he bought 10 of the plugs. The first time he tried deep-cranking the Magnum behind a heavy weight, the walleyes mauled it. Berger immediately returned to the store and purchased the remaining 15 Yo-Zuri Magnums in the bargain bin. Berger later struck more gold when, in another fishing tackle department, he found a bargain bin that held 48 of the crankbaits, which he bought for $1.97 each.

[pagebreak] That might sound like overkill, but Berger regularly snags and loses the crankbaits. He once broke off 16 of them in one day while fishing (and winning) a tournament. He cranks dam tailwaters in the winter, points in the spring and fall, water discharges in the summer and any rock-rubble structure he can find on the bottom from spring through fall.

Troll-Free Fishing
Given the amount of effort it takes to cast and retrieve the heavy rig, wouldn’t Berger be better off trolling? That would be true if he fished larger structures, but most of his targets consist of subtle changes in the bottom. Since he is able to cast across many of these small fishing spots that hold one or two big walleyes, Berger believes casting is more precise and efficient for him than trollling. He always lets the sinker hit the bottom before he begins cranking. This keeps the bait digging the bottom throughout the retrieve.

“I’d rather cast downstream or upstream, because the crankbait dives deeper than when I cast across stream, Berger says. “Casting across the current sweeps the bait downstream as you retrieve.” Sometimes that’s not such a bad thing, but usually it doesn’t allow the lure to descend to the depths where the walleyes are.

“I keep the crankbait moving along at a pretty good clip,” Berger adds. “Walleyes aren’t bashful when they see something they like.” When fishing in the tailwaters of dams, where the current is strongest, Berger must speed up his retrieve to keep pace with the flow. If the bottom is no deeper than 15 feet, he forgoes the weight because the Yo-Zuri Magnum can reach bottom to that depth without any help. Keep in mind, though, that Berger is using fairly light line. Heavier line would keep the lure from achieving its maximum depth.

Otherwise, there’s no science to Berger’s approach. He simply motors his boat as close to a dam as possible, quickly grabs his outfit, casts and then reels like crazy.

“I idle up to the off-limits buoys, which is as close as you’re allowed to get to a dam,” Berger says. “I cast across and slightly upstream and run the crankbait over the bottom as the water swings it down. You have to crank fast to keep the current from overpowering the bait.”