How to Catch Muskies on Topwaters

Few freshwater fish can provide the same level of excitement that a 40-inch muskie does when it bites your line. When they hit a topwater lure, there may be no equivalent. To get your adrenaline-junkie juices flowing, follow our topwater cheat sheet. 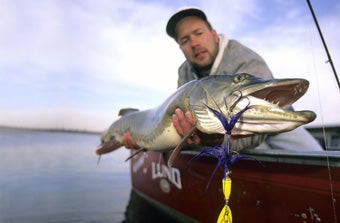 When you consider the visual excitement of a 30-pound muskie smashing into a topwater, it’s easy to understand why so many anglers are turning to surface-working lures. But the lures are gaining popularity for practical reasons too. They excel at drawing the big predators out of dense weedbeds where other lures constantly foul. And because they make a lot of commotion, even on slow retrieves, they’re perfect for night fishing. Topwaters work best on overcast days, at dawn and dusk and at night from late spring through early fall when the water temperature is at least 60 degrees. Although they are primarily shallow-water baits, topwaters will call muskies up from depths as great as 15 feet. Like any muskie lure, a topwater should always be fished with a wire leader. But keep the wire light or else it will sink the bait’s nose and interfere with the action. Another common mistake is retrieving too fast. If fish are swiping at the bait and missing, slow down. Not only will they be able to track the lure more easily, a slower retrieve appeals to big muskies. If you walk into a store that caters to muskie anglers, you’ll see a confusing array of topwaters designed to produce a variety of sounds and actions. Don’t worry about trying to fill your tackle box with all of them, here are the only ones you need. [pagebreak] Stickbaits

These cigar-shaped topwaters have little built-in action, but they have a weight in the tail that makes the head angle slightly upward. Because of this design, you’ll have to you “walk” them across the surface.

When to use ’em: Stickbaits are especially effective in clear water, where fish can get a good look at the lure. Their action is not as intense as most other topwaters, so they are not as effective in low-clarity waters or when the surface is choppy. They don’t work well in closely spaced bulrushes or other emergent weeds, either, as their lateral action tends to snag stems.

How to fish ’em: To walk a stickbait, impart a series of sharp downward twitches with your rod tip to cause the lure to from jump from side to side. After casting, simply point your rod at the lure and make a downward twitch, stopping your rod in a nearly vertical position. Then reel up slack while raising the rod to point at the lure again and make another quick, downward twitch. Experiment with the length and speed of your twitches until the bait jumps across the surface with a side-to-side action.

Best bet: Poe’s Giant Jackpot is one of the few muskie-sized stickbaits on the market. Another good choice is the five-inch Zara Super Spook. [pagebreak] Propbaits

With propellers on one or both ends, these noisy lures churn the water and are capable of attracting muskies from considerable distances. One common problem with propbaits is that the blades may not spin properly right out of the box. If they don’t, bend the blades at different angles until they spin easily on a slow retrieve.

When to use ’em: Because of the commotion they generate, propbaits are an excellent choice in murky water, on a choppy surface or at night. Some of these lures are designed so that the propeller spins the entire head or tail, creating even more commotion and splash.

How to fish ’em: Propbaits are perhaps the easiest topwaters to fish. Just cast and use a slow and steady retrieve.

Best bet: Hi-Fin Twin Teasertail. It has two counter-rotating tail sections that kick up a lot of water and make plenty of noise. [pagebreak] Buzzbaits

Two basic styles of buzzbaits are available: in-line buzzers and safety-pin buzzers. An in-line buzzer is much like an ordinary bucktail spinner, but rather than a Colorado or willow leaf blade, it has one or two buzzblades that spin around the shaft and churn the water. Safety-pin buzzers resemble spinnerbaits and are just as weedless.. The safety-pin shaft runs interference for the turned-up single hook. Most come with a single buzzblade, but some have a pair of buzzblades on separate shafts.

When to use ’em: Buzzbaits can be retrieved faster than other topwaters, so they work well for locating fish. In-line buzzers come with a treble hook and are intended for open water where there’s little chance of fouling or snagging.

How to fish ’em: To get the most strikes, use the “getaway” technique. Hesitate after the lure splashes down and then start reeling slowly so the lure tracks just beneath the surface. About halfway through your retrieve, raise your rod tip and start reeling faster to bring the lure to the surface. A muskie will often hit just as the blades begin to the break the surface of the water. The theory is that a fish following the bait will strike to prevent it from getting away when it reaches the surface.

Crawlers usually have a short, stocky body with a wide faceplate, large lip or hinged arms that produce a crawling action.
When to use ’em: The wide wobbling or crawling action and loud gurgling noise produced by crawlers make them a good choice for murky or choppy water and night fishing. Most crawlers have two or three exposed treble hooks, so they can’t be used in heavy cover.

How to fish ’em: Crawlers are normally fished with a slow, steady retrieve without twitches or pauses. Because of the multiple trebles and the fact that muskies can easily home in on them, you’ll miss fewer fish with crawlers than with most other topwaters.

Best bet: The Hawg Wobbler. A jointed wooden crawler with a large metal lip and a propeller on the tail, the bait has an exaggerated side-to-side wobble and makes a loud gurgling sound that works especially well at night. [pagebreak] Plastic Spoons

Designed to slide across the surface on their back with the hook pointing up, these lightweight spoons are extremely weedless. Most plastic spoons have a silicone or live-rubber skirt that that flares when you stop reeling, giving the bait a life-like appearance.

When to fish ’em: They can be fished through dense weeds, flooded brush, slop or even sticky moss without fouling.

How to fish ’em: Hold your rod tip high and reel slowly to keep the spoon from sinking. The bait will swim erratically as it bumps off weeds or brush. When it reaches an opening, hesitate for a few seconds until the ripples subside. Often, a fish that has been tracking the bait will strike on the pause.

Best bet: The Slopp-EE Pig. With its four-inch-long body and three-inch silicone skirt, it presents a profile large enough to interest the biggest muskies.