Trout in the Vortex

How to fish those churning waters you've been avoiding. Both physically and mentally, this is intense stuff. 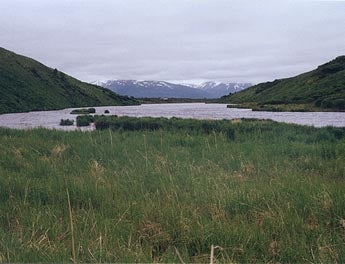 If trout fishing is strictly a relaxing exercise for you, don’t try what you’re about to read. In this form of fishing there are no long, satiny glides-no gentle, therapeutic pulses of water against the legs. Both physically and mentally, this is intense stuff. Then again, you might like fishing the vortex if playing fish is crucial to your relaxation.

The central theme here is fast water-foamy plunges at the bases of small falls; steps and shelves at pool heads and tails; lickety-split runs and channels between weeds, boulders and head-sized rocks. These are not places you would normally go during the early season or right now for that matter, when mayflies popping from glassy currents are almost irresistible. But when the water is warming from late spring through fall, when fishing at your normal hot spots has shut off, the vortex could be your ace in the hole.

Three factors place trout in quick current: dropping water levels; rising water temperatures that reduce the efficiency with which the fish can absorb oxygen; and the mosaic-like surface foam of “troubled” water, which provides fish with a sense of cover.

I started working this pattern years ago when I was in the habit of fishing small spinners on a long fly rod. One early summer day, the places where I usually nailed trout had produced only a couple of strikes from small fish. The sun was high and I was hot when I reached a small waterfall, below which the water swirled white and frothing. I worked the plunge pool, then the run up to the pool. Nothing. At the time, I thought the water right at a falls like this was too swift even for resident rainbows to linger very long unless they were about to migrate upstream the way salmon and steelhead do.

With nothing else working, I half-heartedly flipped my metal spinner to the rock lip, letting it whirlpool as it dropped into the vortex. Tree branches reached over the water and even the air seemed cooler here. A few moments later my line came tight. The rainbow was far bigger than what I normally took from the river. Two similar presentations-no longer half-hearted-produced strikes, one of which turned out to be another good fish.

When hope of any more strikes was well and truly exhausted, I waded into the vortex and began probing the winning spots. Several things surprised me. First, the water was far shallower than I had assumed, no doubt due to dropping stream levels. I also discovered large rocks that acted as current buffers or somehow changed the hydraulics of the flow, making it easier for the fish to hold there. And the water was cooler, which meant it was better oxygenated. That had me a bit stumped, but later I realized there was that subtle “cover,” provided by the broken surface water.

Focusing on waterfalls alone would have eliminated most of the river so I began to explore secondary quick- current areas, hoping they’d follow the pattern. They did. I found fish below little stair-step drops, and in swift water where the current collided against gravel bars and veered away at sharp angles. Rocky runs that I later learned to call “pocket water” had surprising holes ahead of or behind the larger stones. Then there were those deep, extremely swift runs where either vegetation beds or bottom structure constricted the current so that it accelerated quickly through.

Over the seasons on this and other rivers, I used a variety of techniques and learned that it was possible to approach the target area quite closely, which was a good thing. Strikes in the vortex weren’t highly visible, and sometimes went virtually unfelt. I found myself responding instinctively to something suspected rather than actually seen or felt. In this world of subtlety, quick reactions were vital. Long-distance presentations meant a built-in delay, slack line and lost opportunity.

Using metal lures, I developed a modified snap-jigging techque similar to the one used for bass in deeper water. The drill was to let the lure drop, then jig it up with a quick, short snap of the arm and wrist. Because I was dealing with a small strike zone, a compact strike was essential-snapping too hard would whisk the lure away. Because small lures produced best but sank slowly, it was necessary to crimp on a split shot or two a foot ahead of the offering to get it down into the deeper holes and into places where the current was swift. Bait was a different matter.

Small worms were consistent anywhere. In brook-trout water, newts found beneath rotting wood at streamside were gobbled enthusiastically. When worms weren’t working the way I thought they should, I began experimenting with live stoneflies, caddis worms removed from their casings and mayfly nymphs-all found by overturning rocks. The bugs, impaled on tiny light-wire dry-fly hooks, needed split shot to get them down, but rarely were they refused. Natural bait was best presented on a dead drift without the snapping that I used with the lures.

It was important to use two- or four-pound line so that the bait would drift realistically and the action of the ultralight lures could be maintained. Because large trout were always possible and given that I was fishing so close-without the cushioning stretch of a long line-I learned to set the drag lightly on my spinning reel, so light that there was a little slip on the start-up to prevent break-offs. The same held true for fly reels, though flyfishing the quick water was something else again.

Flyfishing the Froth
Initially I fished streamers, and later nymphs on a short line with weighted leaders. I let the nymphs tumble just as I had done with natural bait. The streamers worked best when I occasionally snapped them horizontally, not vertically as I had with the lures. And then I found trout rising.

In the fast runs near shelves and bars, or in narrow chutes formed by constrictions, I would see the quick pop of trout feeding on or near the surface. Either their chosen food was nearly microscopic or the character of the water was such that the bugs simply weren’t visible. I thought that maybe if I looked in less-broken water nearby I would see uneaten insects and thus learn what was on the day’s menu. It had to be some sort of midge.

A Small Solution
They were midges all right, but it was years before a friend told me how he’d figured the secret of catching swift-water trout on the invisible bugs. Before becoming an exec with Lowrance Electronics, Steve Schneider taught flyfishing and tying as a continuing-education course at the University of Pittsburgh. He’d developed a passion for midge fishing on Pennsylvania’s legendary limestone streams. Flies with polypropylene wings were the rage at the time, but they created too much distortion-too large a silhouette to imitate the minuscule bugs that were giving Schneider fits, as they had me.

“The trout were rising, taking adult insects or larva on or just below the surface,” Schneider says. “I never saw what they were eating. None of the standard midge patterns worked. It got to be a joke; I said the fish were eating air bubbles. Then one day a friend was driving us to the river and I had my portable tying bench. I said, ‘I’m going to come up with a fly that looks like an air bubble and it’s going to be as small as I can make it.’ I used something between a size 22 and 26 hook and made a couple of wraps around the hook bend using the thinnest silver Mylar I had. Then I wound a single turn of peacock herl in front. I figured confidence would help a lot, so I told my friend I was going to call the fly the ‘Silver Savior,’ because it would save our day. Well, it did.

“There were 15 or 20 rainbows feeding on those ‘bubbles’ when we got where we wanted, and in two hours or less I caught 10 or 12 of them with the Savior. We lost the six flies I’d tied and I tied more, some without the peacock herl. The silver segmented effect of the Mylar body was enough.”

Though Schneider sometimes fished 20 to 30 feet away in moderately swift runs, for the fastest chutes he worked trout that were only six to eight feet away. “You really needed to concentrate to mark the fish, and what was critical for me was to practically slap the tiny fly onto the water,” he says. “Usually I could even pick up the tiny splash of the Savior hitting the surface. You needed to turn your head with the flow, let the fly drift maybe eight feet in two seconds and if you didn’t see a fish take, pick it up and put it down again, over and over cycling the fly past the fish. I’d make maybe 15 casts a minute. If I saw a fish flash anywhere near where I suspected my fly was, I’d raise the rod and you couldn’t see the fly after it splashed down. Often it was pure instinct when to raise the rod.

“The funny thing is that this wasn’t the application where I thought those Saviors would be best,” Schneider says. “I thought the fly would best lend itself to those long, slow-water stretches where fish hold a couple of inches below the surface and just casually, systematically, sip midges. But it was the fast water where they worked best.”

Close. Quick. That’s the way it is with vortex trout.e lost the six flies I’d tied and I tied more, some without the peacock herl. The silver segmented effect of the Mylar body was enough.”