Get out for great gunning up and down California. 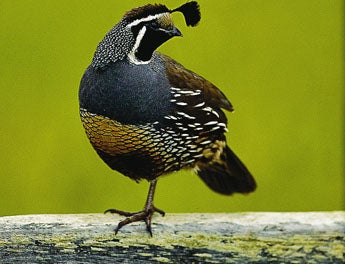 California’s diverse landscape supports a dozen species of upland game birds, which hunters will encounter during seasons that started in September. Several seasons extend into December and January, when hunting areas are uncrowded and the action is top notch.

Late-Season Doves
My first experience with late-season doves came purely by accident. I was on my way home from a duck hunt when I passed a harvested milo field. As I sped by, several doves streaked across the road and into the stubble.

The field wasn’t posted, so I pulled over and took up a position on the stubble’s edge. It’s a sort of unwritten understanding in my corner of the state that unposted land is free to be hunted. That afternoon I hunted alone and saw hundreds of birds. By the time I went home, I had an unexpected limit of mourning doves.

Before, I had restricted my dove hunting to early September. That November afternoon changed my mind, and ever since then I’ve marked the late-season dove opener on my calendar. This year it runs from November 13 through December 27, with a daily limit of 10 doves.

During the late season, doves are more scattered, requiring additional scouting. But for the extra effort, hunters are rewarded with uncrowded areas and big, mature birds, and many of the posted signs seen in September have come down.

Chukar are Never Easy
Chukar are almost always found where the terrain is steep, and they have a strong tendency to run uphill and fly downhill. However, once you flush the covey, they hold and generally provide close shooting for singles and doubles.

Some of the best hunting of the season is in December and January, when snow comes to chukar country. It doesn’t happen every year, but when it does the hunting can be excellent. A few years ago, I headed to Lassen County after an early January snowfall blanketed the higher elevations. We found the birds concentrated just below the snow line and on the south-facing slopes. The season is October 16 through January 30, with a daily limit of six chukar.

[pagebreak] California Quail
When precipitation is sparse, California quail populations suffer; when it is abundant they do well. Last winter and spring, rainfall was below average in many parts of California. As a result this year’s quail production was low, but due to a good carryover of adults, populations are considered stable. For those who put in the effort, hunting will be rewarding.

Quail like brush and, when pushed, retreat to the first cover they can find. While quail like to run, they will hold reasonably well for a dog, particularly after the first covey rises.

Look for them in riparian locales and where agricultural land meets native habitat. Listen for their trademark_ chi-CA-go, chi-CA-go_ call and use a quail call to locate coveys. The season opened on October 16 throughout most of the state (September 25 in Zone B) and it runs through January 30. The limit is 10 quail.

No matter what upland bird you decide to hunt or where you decide to pursue your quarry, you will find late-season hunting areas uncrowded. If you do your homework, you won’t go home empty-handed.

Last-Chance Public Hunts
Dove In the Imperial Valley, hunting is permitted on up to 2,500 acres of land managed under the Gamebird Heritage Program. Contact the California Department of Fish and Game at 760-922-4686 or go to www.dfg.ca.gov and look for “Gamebird Heritage Special Hunt Program” under “Hunting.” There you’ll find hunt dates and contact information for specific regions. Chukar Lassen County, east of Highway 395 between Litchfield and Ravendale and to the Nevada border, supports good chukar populations. Contact the Bureau of Land Management in Susanville at 530-257-0456.

Quail The Coast Range, and in particular the 1.75 milliion-acre Los Padres National Forest, provides good late-season hunting. The forest stretches across almost 220 miles from the Big Sur Coast in Monterey County to the western edge of Los Angeles County. Contact Los Padres at 805-968-6640 or go to www.r5.fs.fed.us/lospadres.