Top guides reveal their strategies for tracking down these ghosts. 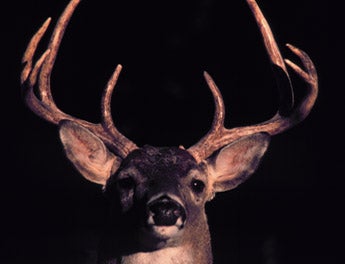 When the hunting pressure’s on, big bucks go nocturnal. Problem is, it’s illegal to hunt by moonlight. Careless hunters will force deer deep into the woods, causing them to move almost exclusively under the protection of darkness. Such bucks can be tagged, although it’s never easy. Four of the nation’s top guides are paid to find these reclusive monsters and consistently put them in their clients’ peeps…when the sun’s still up. (Talk about stressful.) Here, they reveal their tactics.

Find the Food
Dale Carter targets feeding areas when bucks are bulking up for the rut.

Dale Carter brings some 30 years of experience to guiding clients in Pike County, Ill., and has had a lot of experience pursuing older deer. “When bucks hit four years old, they become very difficult to harvest. By then they’ve become quite savvy,” he says. Carter believes older bucks travel mostly at night, with a couple of exceptions: “At the first of October and during the rut, these guys will show during daylight hours.”

Carter has had success by putting clients on clover or alfalfa fields early in October, when the big boys are bulking up for the impending rut and winter.

“These deer can be pursued only when the wind is perfect for the hunter. In addition to perfect conditions, it takes a very skilled and patient bowhunter to draw on one of these old bruisers,” says Carter. “I keep my hunters concealed in the thickest cover I can find-remember, the deer they’re after are extremely wary and any sign of a human will send them packing into the woods.”

Set With Care
_ Joe Gizdic limits his clients to stands where the wind is ideal._

Greene County, Ill., outfitter Joe Gizdic has built a solid reputation for putting clients on some of the state’s largest whitetails. Gizdic says the best way to tag a massive buck is to keep it from becoming nocturnal. “I think older bucks go nocturnal only because of hunting pressure. The best way to hunt them is to keep the pressure off.” To that end, Gizdic never sends a client to a stand unless the wind is blowing from a direction that makes it virtually scentproof.

Gizdic also never lets hunters approach their sites carelessly. “At times it may seem like an inconvenience, but you’ve got to take the path of least exposure when heading to stands,” he says. “This can mean walking several hundred yards out of the way, but it keeps pressure low and deer in their natural patterns.”

Gizdic agrees with Carter’s strategy of hunting green fields early and adds this advice: “Early-season food plots are gold mines, but never hunt them in the morning. You might push a buck off the food he’s browsing at night and inadvertently create the pressure that will make him nocturnal.”

Michigan native Mike Valliere guides for Gizdic at Tall Tine Outfitters. He favors the late season. “It’s the best time to see a buck that’s gone nocturnal,” he says. “After the rut, bucks need to replenish fat reserves they lost.”

Valliere knows big bucks go unnoticed during late season simply because bowhunters aren’t willing to endure the elements. “By late in the year, most bowhunters have hung it up for the season because of the cold, but you’ve got to be out there to get a big one,” he explains. Late-season food is scarce, however, because of the cold, the crop harvest and heavy deer browsing. “Hunger and the need to survive override the need for seclusion; nocturnal bucks will abandon their cover and feed during daylight.”

Locate standing corn, soybeans, turnips, wheat, rye or anything else ffrom the early season and you’ll find bucks. Valliere hangs stands on the outside of food sources or slowly moves toward bedding areas.

Work the Weather
Dennis Floyd believes the best days for nocturnal bucks are the ones with the worst forecast.

Florida’s Dennis Floyd believes that to tag reclusive bucks a hunter has to resort to radical tactics, which includes sitting in the stand in unfavorable conditions. “Rainy, foggy or snowy days are good times to be out. Bad weather intensifies and concentrates deer movement.”

Floyd likes bad weather during the pre-rut. “Inclement weather causes bucks to skirt the edge of food sources looking for receptive does. Those edges are great for a bow stand. Also, scrape lines are usually hit hard after a storm. Bucks rush to freshen them because their scent will have been washed away by the downpour.”

Floyd also believes that all nocturnal bucks move during daylight hours; you’ve just got to be in the right place to see them. “Even the most nocturnal of bucks will get up to stretch and walk to a nearby water hole at midday,” he says. “Find a remote water hole and you’ll catch a big buck quenching his thirst. It takes an enormous amount of patience to get into position, but it’s a great way to arrow a trophy deer.”