Where to find the most intense late-season rut action. 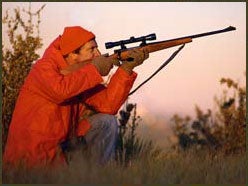 From the timberlands of Maine to the mountains of northern Georgia to the river valleys of the West, a big opportunity is being squandered. The bucks that survived November in the Northern and Central states are about to lose their cool again, but many hunters think the second rut-a time when does that weren’t impregnated in the first go-round come into estrus again-is a mild affair. Not so, says Dr. Steve Demarais, the biologist who oversees Mississippi State University’s whitetail research program. There are fewer bucks running rampant, but deer are concentrated on a much smaller percentage of available land and bucks are still searching for estrous does. Here’s how to pinpoint second-rut action.

Closing In on Second-Rut Action
According to Dr. Demarais, areas with far more does than bucks (read: public land) have some of the best second-rut action. This is because there are too few bucks in these areas to breed all of the does during the major estrus cycle in November. So, 28 days after the peak of the rut, does that were missed in November and the yearlings that weren’t ready to come into estrus then give bucks one more chance. A similar situation occurs in big timberlands: Bucks are often unable to cover all of the real estate that separates doe groups in these areas in time to breed all of the does in November.

Mature bucks can still be had. In fact, Dr. Demarais notes that studies have found that most of the breeding during the second rut is done by bucks that are at least 2½ years old. At the end of deer season, most young bucks are either in cold storage or too worn out to continue searching for estrous does. “The older bucks are worn out too,” says Demarais, “but they’ve learned to pace themselves a little better than the juveniles. They also know from experience that some does will come into estrus one more time.”

Here’s another clue to help you find the hottest second-rut action: Research by Dr. Demarais has shown that orphaned yearling does enter estrus in significantly higher percentages than non-orphaned yearlings. By concentrating on areas with high doe harvests, hunters can put themselves in places where a lot of yearling does will come into estrus. And when yearling does are pursued by amorous bucks, they are much more likely than older does to run into areas that offer little or no protective cover. Because bucks will follow estrous does wherever they go, they become more vulnerable during this period.

These encouraging facts aside, after locating an area that probably has a good number of does that haven’t been bred, you have to pinpoint the right cover within the terrain to find the most intense second-rut activity. After months of pressure, whitetails spend their days on a smaller percentage of available land than at any other time of the year; as a result, deer are actually easier to locate now than they were last month.

Late-Season Concentrations
Hank Hearn, a veteran of 40 deer seasons, has a method for locating pockets of whitetails in December. Hearn received his formal deer-hunting education in the black-water swamps and hardwood bottoms of the Mississippi River delta. As a guide, he’s helped hunters take more than 400 Pope and Young-class bucks. He boils down his late-season strategy thus: “Most hunters are still thinking about buck sign and travel corridors when they should be thinking about protective cover.

But, says Hearn, just finding a low-pressure hideaway isn’t enough. “You also have to look for core areas within escape cover that have a late-season food source nearby,” he explains. “As winter begins, deer need all the protein-rich food they can cconsume. They don’t have the strength to travel long distances to feed.”

Hearn concentrates on thick areas that have fertile soils, such as river bottoms, saddles and agricultural run-offs. During wet years, Hearn looks for food sources on hills, slopes and benches. During droughts, he focuses on bottoms that have retained some moisture. If Hearn finds a water source within protective cover, he knows he’s found a midday hot spot.George Mayfield, owner of The Roost, a commercial whitetail-hunting lodge, has something to add to this strategy. Born and raised in a clapboard house on the far end of a short dirt road in rural Alabama, Mayfield left the farm to earn a master’s degree in wildlife management. He explains, “Our harvest data shows that if you’re going to be successful, you have to do more than locate cover near a quality food source. Our hunters are most successful when they take a stand in a bedding area that also blocks the wind, such as evergreens or cedar. You have to be careful, however. If enough light can’t penetrate the canopy there won’t be any browse underneath. You’re better off hunting over a partially closed canopy of pines that has open spaces within the bedding area. The pines keep the wind out, which prevents the browse from freezing, and open areas provide places for deer to feed in the middle of the day. When deer meander around browsing, your chances of getting a shot are much higher.”

When you’ve found the ideal feeding and bedding areas, you still have to choose the right stand. Hunting over an opening in a bedding area is one good location, but if you’re looking for a trophy buck, there’s an even better spot.

Breeding Funnels
Illinois native Dan Perez, national spokesperson for Mossy Horn Hunting Seminars, has tagged more than 20 P&Y; whitetails. Perez feels that once you’ve located the food source that’s being used and bedding areas nearby that have good thermal cover and browse, you have to look for second-rut “breeding funnels”: trails bottlenecked by a terrain feature that link these doe bedding areas.

“Late in the season you might as well forget about corridors that lead from bedding areas to food sources-the deer just aren’t there during the day,” says Perez. “Now that you’ve gotten this far, it’s time to get in a second-rut breeding funnel. Sneak between the bedding areas and find a place where these hidden trails are forced together by the terrain.”

Joe Gizdic, owner and head guide of Tall Tine Outfitters in Illinois, describes breeding funnels as benches, terraces and any other geographic feature that force trails that link bedding areas together. He says bucks use such routes to conserve energy as they search for estrous does. These trails also allow bucks to avoid the open areas that saw heavy hunting pressure last month. Gizdic advises, “Look for scrapes along these breeding funnels. The older bucks are still rutting.”

Bobby Culberson concurs. Culberson is the head guide for Mississippi’s Tara Wildlife, one of America’s top whitetail destinations. Late in the post-rut and into the second rut, he says, “Bucks are susceptible because you can catch them traveling between hideouts as they scent-check for estrous does. But keep in mind that you’re not going to see bunches of animals when watching breeding funnels. You might sit for days waiting for a mature buck to finish with one doe before the buck begins to search for another. But when you do catch a buck in search mode, he’ll definitely be a shooter.”

Consider the facts: 1. Public land has some of the hottest second-rut action. 2. Mature bucks are still rutting. 3. It’s very easy to pinpoint the doe concentrations. Any way you add it up, you have an opportunity to tag out late that shouldn’t be squandered.