A fresh blanket of snow offers hunters with enough skill and patience a chance to stalk a trophy deer. 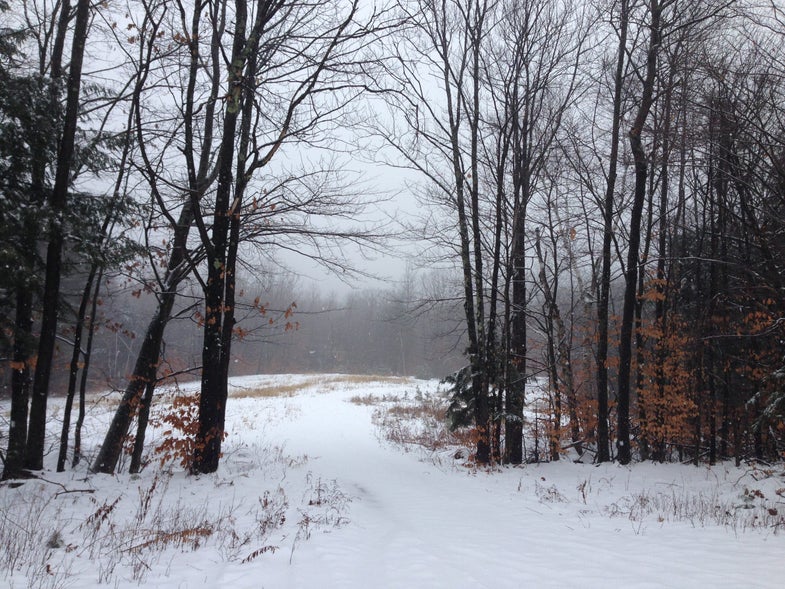 To the northeastern deer hunter, there’s nothing more elating than waking up to a fresh tracking snow. It’s like Christmas, Thanksgiving, and Easter all rolled into one. The world seems renewed. Every track is fresh. It’s time to find one and follow it to its logical end.

I’ve long been intrigued by the lore of tracking down a big, northwoods buck. That interest was recently rekindled when I sat down to talk deer hunting with fellow whitetail enthusiast and Mainer, Richard G. Bernier. Bernier has been practicing the art of tracking deer for more than 30 years and has written two books on the subject. While his modesty keeps him from using the word “expert,” the term certainly fits. The following are some of Bernier’s insights into tracking big-woods bucks.

HOT ON THE TRAIL
A lot takes place before your soles ever touch the snowy ground. If you want to bag a bragging-size buck, prerequisites include a remote and relatively unpressured area. The more remote the area and the fewer roads that lead there, the less hunting pressure it receives, and the less likely you are to be interfered with. Study harvest records and topographic maps to find areas that fit these requirements, then head for the woods.

To begin tracking you obviously need a fresh track, and you can cover a lot of ground by driving the backwoods roads before daylight. Once you find one, you need to size up the deer that made it; if you’re going to spend the day tracking, you want it to be worth the effort. Look not only at the size of the track, but how deeply it sinks into the snow. A track of 4 inches or longer was almost certainly made by a mature buck. An even better indication is width. A track that is 3½ inches or more across comes from an old, big buck. If there are other tracks around, you can also judge the relative sinking depth of each-the deeper the track, the heavier the deer that made it.

You also need to determine, as best you can, how old the track is. Knowing what the weather was like hours or even days before can be helpful. If it snowed all night, check how much snow is in the track. If the temperature dropped suddenly overnight, try to determine whether the tracks were made before or after. Do they look like they were made in soft, wet snow or dry, frozen snow? Some of this will come with experience, but you can always compare deer tracks with your own boot prints to see how they differ.

When you decide you’re going to take up the track, wait for daylight, then take a compass reading before leaving the road. With GPS, you can mark your vehicle as a waypoint. Be sure to take bearings or mark your route throughout the day as well.

A MENTAL GAME
Once on the track, your first objective is to determine what the buck was up to when he crossed the road. Was he feeding, following a doe or lining out? If it’s the latter, you’ve got to make time. He’s got four feet and you only have two, and if it’s during the rut he’s on the prowl looking for does. He may walk all day and you’ve got eight hours at best to catch up with him.

If the buck was feeding or with a doe, you need to become alert at once. A doe probably won’t be traveling far and if either she or the buck is feeding, the next thing they’ll do is bed so they can digest. Now you’ll need to use your eyes more than your feet; you’ve got to spot the buck before he spots or smells you. It’s especially important to pay attention to wind direction while on the track.

Outside of the rut, an old buck’s number-one goal is security, and that means thick cover. As you approach such cover, slow down and study the brush, looking for parts of a deer such as a patch of brown or the tell-tale horizontal line of its back or belly. Also look for movement, like the flick of an ear. Even when at rest, deer are constantly checking the wind and scanning their ears for signs of dangerr. This part of the sport is as much mental as it is physical. You’ve got to concentrate and stay focused-tasks that become more difficult as each hour passes without game sightings.

It helps if you’re familiar with the area you hunt, and what the general patterns are of the deer that use it. This will help you predict where they may be going. Watch also for sudden changes in the deer’s direction, which may indicate he’s bedded down. A buck will often make a 90-degree turn, and may even backtrack so he can watch his return trail from his bed.

Tracking bucks in the snow is not for the casual deer hunter. There are few certainties except that there is a deer at the other end of the track. In between may lie many hours of arduous trekking. A misstep or lapse of concentration could cost a day’s work. But in all such things, it is the journey and the things we learn along the way that are most valuable.