The Truth About Bowhunting Elk 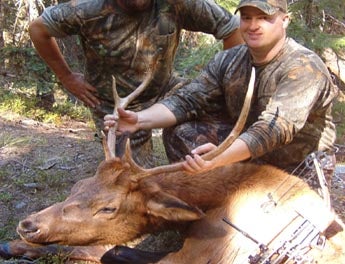 Mississippi native Will Primos saw his first wild elk on a family vacation to Colorado in 1967. The skinny 15-year-old gawked at the beasts and thought they must be the most majestic animals God had ever put on earth. He vowed to come back and hunt them one day when he had the time and money. It took him 21 years to fulfill that vow.

“I didn’t get a bull,” he admits, “but the bugling, the Rockies, the climbing-it was all I had hoped for and more.” Primos has spent the last two decades turning his fascination into a thriving business. His cow and bugle calls and Truth DVD series dominate the elk-hunting market. He’s as gung-ho as ever, chasing bulls with his bow from New Mexico to Montana each fall. These are his best tactics.

**Get Close **
Most people call and then hike toward a bull that screams back at them. “Do just the opposite,” says Primos. “Keep watching or listening to an elk and sneak as close as you can to him before making your first call. Climb up or down a mountain, circle a mile, sneak over the back of a ridge, whatever it takes.” Keep veering into the wind, watch the finicky thermals and use terrain for cover. Look for cows up ahead. If you spook one, a whole mountain might blow up with elk. Slip to within 150 or even 100 yards of the animal if there is sufficient cover.

Make some racket as you go. “Elk are huge, noisy animals,” notes Primos. “The more rocks you roll and the more sticks you break, the more you sound like a cow on the move. Bulls like that.”

Level the Field
Upon nearing the bull, look around and study the terrain. “My number-one rule is never to call from a bad or questionable spot,” says Primos. “One of the worst places is above an elk. A bull never wants to approach other elk from below, because if a fight breaks out, the top bull has the advantage.” He points out that if you call a bull from above, the animal will almost always circle to get on your same plane, often moving downwind and busting you. So always level the playing field.

[pagebreak] **Get Hyper **
It’s amazing how vocal elk are. Bugles, squeals, brays, mews, “glunks”-just when you think you’ve heard it all, an elk cuts loose with another weird sound. Like the “hyper” cow call, a series of loud, high-pitched, wavy mews and whines with a staccato quality and no rhythm or pattern. The unique call is made by bearing down long and hard on a mouth cow call, with no rhythm of your own.

The hyper cow has become one of Primos’s go-to calls, even though he’s not sure how to interpret it. “It could be two cows fussing, or maybe a cow trying to get rid of a calf,” he says. “It might be a cow indicating she’s ready to breed. Whatever it means, it drives some bulls crazy.”

September 15 to October 1 is the right time for hyper calling in most elk haunts. Herd bulls rounding up cows are pumped to respond. Even if a giant 6 by 6 won’t leave his harem, at least he’ll bugle and give away his location. Satellite bulls, many of them solid trophies, may come running as well. Hyper calls also aggravate a lot of cows and pull them your way, sometimes with a bull bringing up the rear. Sometimes a bull isn’t ready for fancy calling. “If you get hyper and a bull shuts up or stops coming in, pipe down, but don’t quit,” says Primos. “Go back to softer mews to keep him bugling and moving your way.”

**Shorten Your Bugle **
The odd bull will shun cow calls but scream at bugles, so be ready for the challenge. Just bugle right. “Most hunters bugle way too long,” says Primos. “If you listen closely to a lot of bulls, you’ll notice that most of their bugles are pretty short.” So cut yours off. Toss in more moans, squeals and glunks (an elk’s version of a grunt). Primos never tries to sound like the biggest bull on the slope. He prefers to sound like a wimp. “I don’t want to intimidate any bull,” he says. “I try to call everry one in. It’s a rush, whether a spike or a six by six shows up.”

Many hunters swear they can tell a spike’s bugle from the roar of a six-pointer. “I’m still not that good,” says Primos. “I’ve called in three-hundred-inch bulls I thought were spikes, and rag-horns I swore were monsters. You never know, so try to call ’em all.”

[pagebreak] **Double Up **
Every time somebody asks what his favorite call is, Primos smiles and says, “A good buddy. If you double up, I swear you’ll double your chances of getting a shot at a bull.”

As Primos and a pal move in on a bugler, they both cow-call. The closer they get, the more aggressively they mew, especially if a bull is hot and screaming. “We sound like two cows in a heated conversation,” he notes. “Man, if a bull is right, he can’t stand it. He’ll come for a look.”

But coming for a look is one thing; tricking a big bull those last yards into bow range is quite another. As soon as you hook an elk and have him coming, the front man puts away his call and sets up against cover where he can see and shoot.

The caller moves 50 to 75 yards back, maybe even 150 yards, mewing and whining, rolling rocks and cracking sticks to make sounds like elk do. To close the sale, the caller kneels or stands where he can clearly see and hear what’s happening out front. Then he can use the terrain and cover to move left, right or back as needed to drag a bull past his partner for a shot.

**Wait for a Broadside **
A lot of bulls come straight in and present a big dilemma. If the animal never turns, forget the straight-on chest shot. “With a bow it’s just too risky,” says Primos, who also urges you to hold your arrow when a bull quarters on. “Even if your arrow gets one lung, you’re probably in trouble. You might find that bull a day later, but the meat will be ruined.”

Primos’s worst shot on an elk might surprise you. “I’ve learned the hard way that quartering away, especially if the angle is severe, is a nightmare,” he says. “It’s okay for deer, but an elk has a tough hide, thick muscles, big ribs and a huge belly that is always stuffed with wet grass. It’s tough to slip an arrow behind one of those ribs and get it all the way up through the vitals.”

That leaves a full broadside shot, the only one that Primos recommends bowhunters attempt. Whether a bull is 20 or 45 yards away, if you put an arrow with a sharp broadhead tight behind the shoulder and through both lungs, he won’t go far. “One hundred fifty yards, max,” says the pro. “Or maybe just fifteen yards, like my best bull of last fall did.”