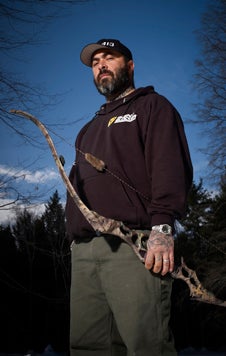 Longtime front man for the band Staind, Aaron Lewis just released his first solo EP, Town Line, and is busy working on a TV show called Hunting With Heroes. From his home in rural Massachusetts, he talked to us about his passion for deer hunting.

OL: In the video for your hit
single “Country Boy,” there’s a photo of you with a BB gun at age 2. Is that when it all started?

Lewis: I’ve been hunting deer since I was old enough to keep up in the woods, probably age 4 or 5.

Lewis: I generally leave the guns at home when I’m hunting deer. It’s a lot more challenging to get a deer close enough to dispatch it with a compound or recurve bow. Sometimes I’ll use a muzzleloader at the end of the season.And to make the hunt last as long as it can, I’m pretty picky about what I kill.

OL: What are you looking for?

Lewis: I’m looking for a buck that’s four and a half years old or older. I bowhunted in Missouri, Kentucky, Ohio and Massachusetts last season and I didn’t fill a single tag. I let a lot of 140s walk by because they were up-and-comers.

OL: Do the other members of the band share your passion?

Lewis: No, no one else in my band is a hunter. The drummer is borderline PETA, so he and I don’t talk about it very much. Actually, I make it a point to talk to him about it as much as I can.

OL: How and when do you find time to hunt and fish?

Lewis: Oh, man, not much time these days. Especially with the solo project in the studio and the band recording its next record with Staind. But there is the hunting TV show that we start filming this year. Hunting is scheduled into my schedule, but the fishing thing … I’ve got friends all over the country who take me fishing. In Florida, I meet my buddy who’s a flyfishing guide for tarpon. Gotta try to make time for the things you love in life.

OL: What’s the scoop on your new show?

Lewis: Me and a couple of retired military personnel are doing a hunting show called Hunting With Heroes, centered around our army vets. We’ll be taking them turkey hunting and deer hunting and maybe elk hunting. Just to tell them how much we appreciate what they do for us. We’re filming it this year and then look to distribute it later. The whole show is about giving back and saying thank-you.

OL: Anything you dream about doing?

Lewis: I guess I wouldn’t mind going to Argentina and flyfishing for some of those amazingly large brown trout. I’ve been invited to go down for dove hunting, but haven’t made it yet.