Bowhunting Tips: When to Take a Frontal Shot

If you talk to me about bowhunting for more then 15 minutes, you’ll find that I am an advocate of... 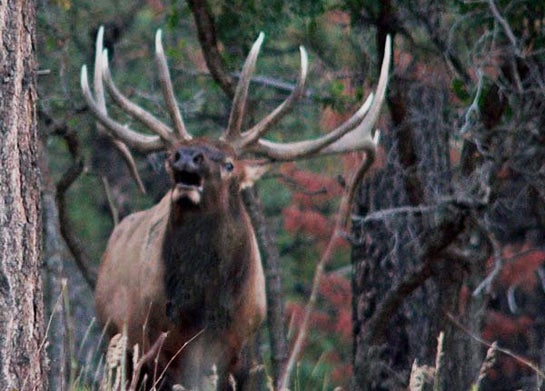 If you talk to me about bowhunting for more then 15 minutes, you’ll find that I am an advocate of the frontal shot (taking a shot when an animal is facing you, not standing broadside). I know this is a controversial subject, but hear me out. I’m and advocate of this shot for two reasons: 1) I hunt solo a lot of the time, and when you’re calling elk by yourself, they tend to come in head first; 2) It’s deadly effective.

Before I explain why this shot works so well, here are a few things you need to ask yourself before you even consider taking it.

1) Can you hit a softball-size circle every time at 20 yards under any conditions? Breathing heavy, adrenaline flowing 100 miles per hour, typewriter leg, up hill, down hill? If you can’t, don’t try it!

2) What’s the animal’s mood? Does he know you’re there? Is he giving you the sneak look, or is he looking for a cow behind you? If he looks edgy and knows somethings up, don’t shoot.

3) What angle and position is the animal? Is he slightly cornering to you (this is what I prefer), laying in a bed or facing straight on?

4) Do you know where to aim in all of these positions? Do you understand the anatomy of the animal? If you don’t, don’t take the shot.

5) Do you have the right equipment, more specifically, are you bringing enough kinetic energy to the party? I draw 80 pounds and shoot a 500 grain arrow.

If we’re being truly honest with each other, this criteria probably eliminates 80 percent of the bowhunting population from taking frontal shots. But those who are capable of accurately taking this shot, can attest to its effectiveness. I have killed more than 40 animals with a frontal shot and have only experienced 1 bad outcome. Those are pretty good numbers with archery tackle. I can also say that I have been with a couple of hunters who have tried this shot and shouldn’t have. The blood trailing and retrieval job was a nightmare! We did find the animals, but a follow up shot was needed.

I have taken 15 elk with a frontal, with some as close as 4 yards and others out to 23 yards. In almost all of those scenarios there was an incredible blood trail to follow and a short recovery.

Why it Works
The shot is so deadly because your arrow doesn’t have to cut through any bone. It goes straight through the bottom of the respiratory system, cuts through veins and arteries that run to and from the brain and then slices through the heart.

Check out the photo to the left. See that pocket between the animal’s two front shoulders? That’s where you should send your arrow.

The thing you need to remember about the frontal shot is that the opening in the animal’s chest when it’s facing you isn’t much wider than the width of a softball. When the animal is quartering, you can still make a good shot, but you have to shoot through some ribs. They are not very tough to get through, but it does increase the chances of only hitting one lung and if that happens, you’re probably going to be in for a long tracking job.

The most important part of executing the frontal shot (besides being accurate) is knowing where to aim. Instead of trying to explain it to you, I put together a photo gallery showing a variety of different animals at different frontal angles. The middle of the red dot marks the spot you should aim for. If you can hit the center of that dot at 20 yards, I can almost guarantee you a clean kill.