I recently published a piece criticizing deer farmers for creating “freak show” bucks through genetic manipulation. Apart from a few... 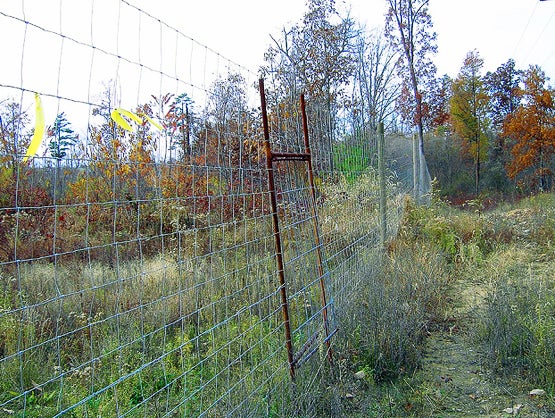 I recently published a piece criticizing deer farmers for creating “freak show” bucks through genetic manipulation. Apart from a few deer breeders who were critical of the post, it seemed like most readers shared my concern. It was my most widely read post so far on OutdoorLife.com and it really got some folks fired up.

But before we get any further, a few facts:

– High fence hunts are widely practiced in this country

– High fence hunts are growing in popularity, are a very big business, and have many supporters

– Not all hunting behind high fences is fee hunting on shooting preserves or game farms. Much of it is on private ranches with thousands of acres under fence

Much of the opposition to high fence hunting seems to center around the concept of “fair chase.” Fair chase is defined by most as a situation where the hunted is not put in a disadvantaged position and has a real chance to escape.

In the wild, this means you don’t shoot a moose when he is swimming across a lake, you don’t walk up to a caribou mired in the mud and shoot him and if you find two helpless locked-up bucks you do every thing you can to get them apart and let them escape unharmed.

Some extend the definition “fair chase” to not hunting over bait, food plots, watering holes or any other artificial means of concentrating wild animals. Others believe hunting islands, blind canyons or using natural terrain blockades isn’t fair chase either. Short of obeying state and federal fair chase game laws, the concept can get pretty gray pretty fast. Basically it is up to the individual hunter or club or organization to draw the fair chase line in the sand. When it comes to fair chase and high fences, there are three different scenarios. Here’s my take on each…

Fair Chase Behind the Fence

A gray area in the hunting community is hunting behind a high fence that encloses hundreds if not thousands of acres. The whitetails living on this ground have never seen a baby bottle or Snickers bar and are every bit as wild and wary as deer on open land. The deer live under natural wild conditions and are plenty challenging to hunt. Aside from the fence, they are not artificially constrained or for that matter, even concentrated in a given area. In my book, this is black and white, this is fair chase hunting.

The fences are up to keep undesirable animals (and trespassers) out and desirable animals in. I have on occasion hunted these places and have noticed no difference in hunting these properties from unfenced ground. In fact, some of them can be considerably tougher to hunt than some free range properties I’ve been on. On hunts like this there’s no guarantee that you’re going to kill a buck, or even get a chance to kill a buck. As far as I’m concerned, the only real difference is you can’t register your high fence kill in some of the record books.

But cut the acreage to say 50 or 75 acres, stock it regularly with new recruits from a game farm and feed your deer in troughs, and it’s a different story for me. The hunt is now a “shoot” and I want no part of it (more on this later). I shoot doves, I hunt whitetails. But that’s just me.

Almost Fair Chase Behind the Fence

Then there are shooting preserves with stocked game, guides who put you on animals and highly-managed property. These places basically guarantee a kill. Many argue that these pay-to-hunt shooting preserves and game farm hunts are not only legal but plenty fair as far as the “fair chase” doctrine goes. They point out that it is not shooting fish in a barrel and their hunting experience is every bit as rewarding as a hunt taken in the wild. In fact, they argue since most shooting preserves are well stocked with wild game, the experience for many is more rewarding than a non-fenced hunt where you often come home empty handed.

They cite high fence operations, which excel at providing a “hunting experience” that feels like a real hunt with plenty of drama and “almost got him” opportunities. The high fences are seldom if ever noticed, the guides are authentic and the animals are good at making themselves scarce. Many of the animals were born behind the high fence or at least have lived there long enough to learn the ropes. The “stockers” came out of natural whitetail stock not inbreeding freak show antler genetics. The hunt often lasts for a couple of days or more but in almost every case, by the end of the hunt the hunter is put on a shooter, shots are fired and an animal gets killed. Backs get slapped, chests get pounded and somebody gets paid. Money must change hands in order for this kind of thing to work.

Proponents of these hunts claim they are a great way to introduce newcomers to the sport, or that it’s the only way they can hunt with their busy schedule. Or maybe it’s the only hunting within 500 miles. For some, it’s what hunting is all about. Some simply state: “It’s legal and I’m having a good time, so mind your own damn business and quit putting ideas in the anti’s heads!”

OK, I get it, and I don’t begrudge folks who enjoy this kind of thing. I’ve been there once or twice and it didn’t do a thing for me. It might be a sign of the times, but count me out!

Unfair Chase Behind the Fence

The worst canned hunts (or more accurately shoots) are nothing short of obscene. You select your “trophy range” in inches and by what your checkbook can handle. The only rule being “the bigger the better.” Your deer may have been delivered to your hunting location a few days earlier or may have been stocked a few weeks or months earlier. If he carries uncommonly massive antlers he is probably the product of genetic manipulation where the only thing that matters is rack size. He was sold as a “shooter” because he didn’t make the grade as a breeder. He may be semi-tame or even semi-stupid with all that “only antlers matter” inbreeding in his line.

You may shoot him out of a golf cart or you may choose to break in those new boots, but one way or another you will get your buck. You may hunt over bait or wait for the boys to walk him through a narrow shooting slot but get him you will. You will head for the bar, pay the bill ($10,000 to $15,000 for a really good whitetail), drive through the gate and will be home for dinner.

The problem is, you’ve just been ripped off. This buck is no trophy. He is not the same as a naturally bred whitetail. His spectacular antlers are the product of genetic manipulation and artificial insemination. He’s been raised on supplements and steroids and all sorts of high performance foodstuffs.

Most agree these hunts have little semblance to the real thing. Not only are they not “fair chase” but an abomination as well. Becoming a hunter isn’t all that complicated. You can do better than this.