Hunting in the wilderness is never easy, but that’s exactly the point. These sacred places are hard to reach—and even harder to leave. 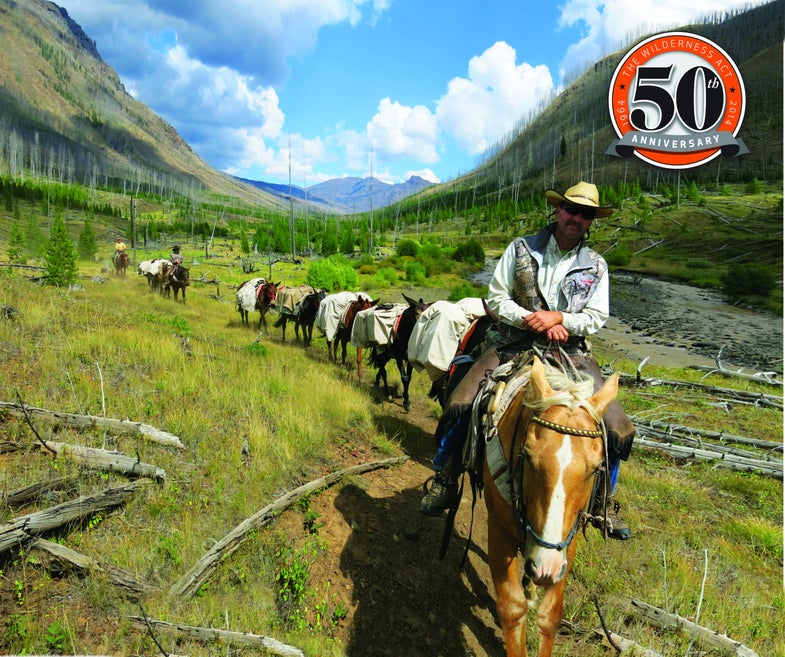 Something both ordinary and exceptional happens when you pass a wilderness boundary. Cell-phone signals and the drone of motors—along with the other trappings of modern life—fade away, and suddenly you are on your own. No engines. No wheels. No networked devices. Just you, the gear you carry, and your primitive skills, alone in a landscape that hasn’t changed since glaciers carved it, fires tempered it, and wind and water defined it. This is the gift of wilderness, those rare places that haven’t been shaped and managed by humans.

Fifty years ago this month, Congress passed the Wilderness Act, permanently protecting a precious few of America’s most remote and remarkable landscapes. Designated wilderness areas can’t be farmed or mined, and wild animals are their only permanent residents. Wilderness areas are controversial; some people think we have too much protected land in America. But backcountry hunters don’t think of these areas in terms of what they take from us. We celebrate wilderness for what it provides.

Need a reason to visit a designated wilderness? Here are six of the best.

“We’ll base at Camp Monaco,” says Lee Livingston. The French Riviera flashes into my mind before Livingston’s High Plains drawl squelches visions of opulent casinos and bikini-optional beaches. “Up the North Fork. It was Buffalo Bill’s last hunting camp, 100 years ago this fall. He and Prince Albert of Monaco hunted elk and bear and had a big time. Lots of history back in there.”

Lee’s reputation as a horseman is why I’m here, in his tack shed planted almost exactly between Cody, Wyo., and Yellowstone National Park’s east entrance. Equal parts endurance athlete and bucking-chute boss, Lee is a big-game outfitter, but his judgment of trophy heads doesn’t interest me as much as his skill with pack trains and wall tents. Get me into sheep country, I tell him—and myself—and I’ll do the rest. [ View story ]

The soft patter of rain masked any mistakes as my partner and I tiptoed into position on the edge of a bowl of dark timber. The day before, we’d pulled a 6×6 bull from the gloam below, and although we didn’t get a shot, we didn’t spook him either. I sat behind a clump of sage 30 yards below my buddy as he sent a series of mews wafting into the wild. Movement caught my eye, but it was so close and low that my first thought was…field mouse. The rustling morphed into a tuft of hair, then a yellow, slitty eyeball. Moments later, the full face of a mountain lion materialized. [ View story ]

I’d like to tell you my buddy and I made a deliberate pilgrimage to Montana’s lowest, flattest, smallest, easternmost, and least-visited wilderness. Truth is, the ducks led us there. It was early October and we were on a bird-hunting walkabout, navigating back roads by whim, impulsively roaming the state’s northeast corner. [ View story ]

Driving north along U.S. Route 95 near Riggins, Idaho, I felt that perhaps I’d been lied to. Andy Savage of Heaven’s Gate Outfitters had promised that we’d hunt black bears in the coniferous subalpine forests sandwiched between the Snake and Salmon Rivers, but nothing I could see looked like the country he’d described. Rather than pine forests, the countryside was dominated by vertical rocks rising sharply up from the river, the volcanic soil covered with dull, tan grass and scattered sagebrush. It didn’t look like bear country.

Then I began to climb. [ View story ]

The rock fell away to greensward that lapped black timber on the opposite wall. I peered over. A rifle-shot below, antlers shook a bush. [ View story ]

I was getting married in two weeks, and I needed an elk in the freezer, fast. It was mid-September and nearing the height of the elk rut in western Montana. Poor planning for nuptials? Perhaps.

My co-worker Paul and I had both drawn rifle tags for a cow right in our backyard, the Rattlesnake Wilderness Area. The plan was to shoot a fat cow or two, haul them out on the bike trailer, and be home the next day. If there was an easy way to tag out, this had to be it. [ View story ]