Handgun Hunting 101: The Gear, Cartridges, and Tips You Need to Get Started

Getting within range of game and making a killing shot with a handgun requires tack-sharp shooting and stalking skills. This is what makes hunting with a firearm you carry in a holster addictive and fun. 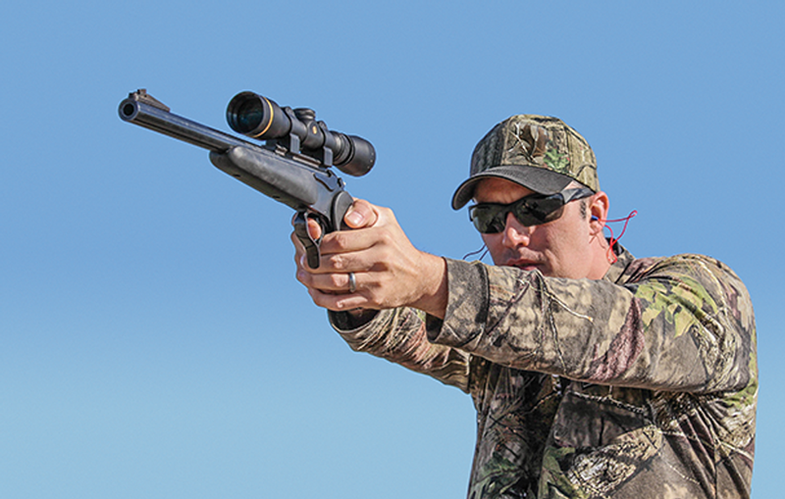 Why, with long-range hunting all the rage, would anyone commit to using a handgun for hunting big game?

The answer is simple: Handgun hunting presents its own challenges, and demands more of the hunter. Rifles and muzzleloaders offer better accuracy at greater distances, but for anyone willing to put in the time and effort practicing with their firearm and closing the gap on game, handgun hunting offers a thrill all its own.

It helps to have good equipment and good coaching, and on my first dedicated handgun hunt, I had both. I was attending a Thompson/Center media hunt in south Texas, and with four deer tags to fill, I was interested in trying out the company’s newly reintroduced Contender pistol. Paul Pluff, director of marketing communications at Smith & Wesson, helped set up the hunt and joined me in camp. Having been with S&W for more than 35 years, Pluff is a dedicated handgun hunter and a fantastic shooting coach. But my training session came with a warning. 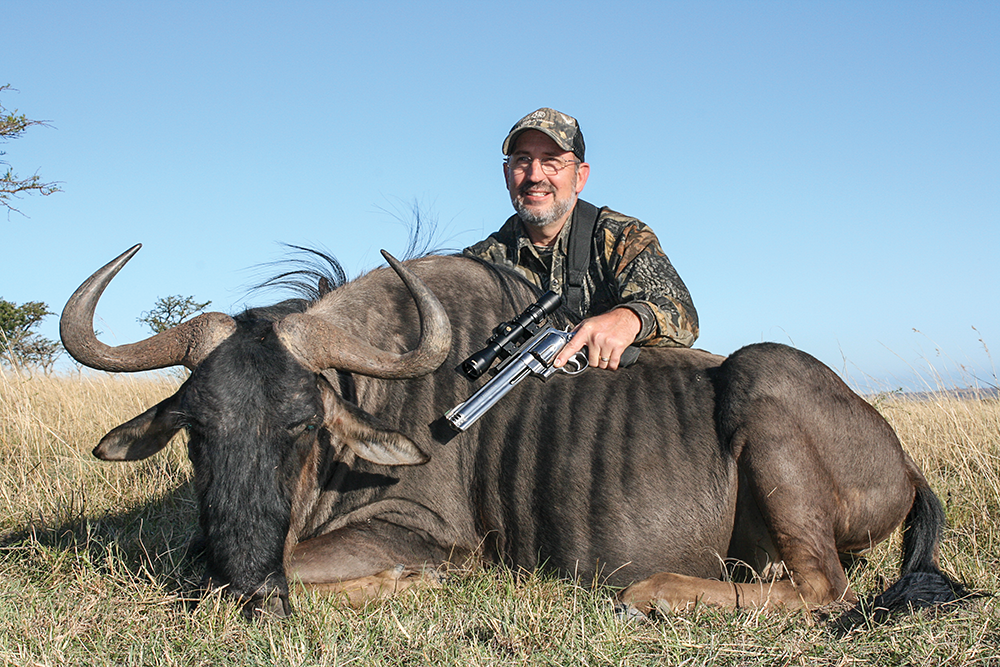 Distinct Advantages
In the field, the handgun was much more cooperative than a rifle. When holstered, there was no exposed barrel to hang on catclaw thorn or mesquite, no tugging weight from a sling. And when I was in a blind or setting up to rattle, the gun was easy to maneuver and pointed quickly. I could hunt with a tripod in hand and still be ready to quickly shoot over brush. And with visibility at less than 100 yards, hunting with a handgun was not a limitation in terms of maximum effective range. When my chance finally came, I took a whitetail buck at 30 yards with one shot. I don’t know who was more excited, Pluff or me.

It’s a little surprising that over the course of the last 60 years, handgun hunting hasn’t become more popular. In the mid-20th century, handgun hunters were limited to a handful of wildcat cartridges and the .44 Magnum and .45 Colt. Since then, there has been a dramatic increase in the number and potency of handgun cartridges for hunting, and a corresponding uptick in the quality of handgun hunting bullets. And given the quality of today’s handgun hunting scopes, in the right hands, these guns are capable of taking larger game at longer distances than ever before. Pluff demonstrated this on a safari in South Africa’s Eastern Cape, where he took a kudu bull at 193 yards with a .460 Smith & Wesson.

Do I count myself among the tribe now that I have taken a deer with a pistol? Certainly. Handgun hunting has its own a special challenges that require extra effort and time. But, after all, isn’t the challenge part of the hunting experience? If you agree, you might be ready to join the tribe.

1. The Bog-Pod Tac 3s tripod features lightweight telescoping aluminum legs and provides a steady rest no matter the terrain. The rubberized cradle offers 360 degrees of rotation to make it easy to swing to a new target or track an animal on the move. ($160; basspro.com)

2. To protect your vision, carry a pair of Wiley X Valor safety glasses, which feature shatterproof polycarbonate lenses and a comfortable wraparound design. They are available with your eyeglass prescription as well. ($130; basspro.com)

3. Cabela’s Men’s Leather Handgun Gloves provide protection from the hardest-kicking magnums, thanks to their double layer of leather and extended middle fingertip. Yet the Spandex backing offers plenty of flexibility, and the open index finger allows for better trigger control. ($35; cabelas.com)

4. Every great hunting handgun needs a quality scope, and there are few better suited to the task than Leupold’s VX-3 Handgun 2.5–8×32. It comes with the company’s Multicoat 4 lens coating and the Xtended Twilight Lens System, and it provides a superb image with edge-to-edge clarity. ($690; leupold.com)

6. Magnum cartridges produce noise levels that can permanently damage your hearing, but the SportEAR Ghost Stryke reduces noise levels up to 30 dB and actually amplifies ambient sound up to six times when you aren’t shooting. ($399; ghoststryke.com)

Though handgunners don’t have the hundreds of options their rifle-carrying counterparts do, there are a bunch of handgun calibers that work for hunting. Here are four of my favorites.

A) 10mm Auto: The 10mm was originally designed as a law enforcement round, but it failed in this role due to its excessive recoil levels. With top-end ballistics that are close to the mighty .41 Rem. Mag., though, it excels as a hunting cartridge. And if you want a semi-auto for deer-size game at moderate ranges, this is your best bet.

B) .44 Rem. Mag.: Over the years, the .44 has become the .30/06 of handgun hunting rounds. There are plenty of options in terms of guns and ammunition, and recoil levels are manageable for most shooters. That’s why I love it.

C) .480 Ruger: The .480 was a collaborative effort between Hornady and Ruger, a cartridge that landed between the venerable .44 Rem. Mag. and the .454 Casull in terms of energy and recoil. With factory loads capable of propelling a 325-grain bullet at 1,350 feet, the .480 is a potent killer.

D) .460 S&W Mag.: If you can handle the .460’s recoil, it offers ballistics that look more like a rifle cartridge’s than those of a handgun round. Plus, the 80-something-ounce X-Frame revolver that was designed for this cartridge will shoot .454 Casulls—making them easy to manage—and .45 Colts.

How to Become a Better Handgunner

1. Lose the death grip
Gripping too tight can cause a reduction in accuracy, Pluff says. Instead of squeezing as hard as you can (which causes the muzzle to shake), establish a firm grip that doesn’t strain the muscles in your arm and hand.

2. Work on your trigger control
As with a rifle, you’ll need to practice your trigger squeeze so you get a nice, clean break. With a handgun’s shorter barrel, problems with trigger control will be exacerbated, so spend plenty of time dry-firing, making sure your sights stay on target as the hammer drops.

3. Lower the power
Keeping your scope on a high magnification makes it difficult to find your target quickly. Instead, leave the optic at its lowest magnification.

4. Eliminate a flinch before it starts
Flinching is the result of physiological responses in anticipation of a shot, so you need to make practice as misery-free as possible. Wear hearing and eye protection and gloves, and avoid marathon shooting sessions.

5. Get planted
Accurate handgun shooting requires a steady rest in the field, so take along a bipod or tripod and learn to take advantage of natural rests.