5 of the Best Bullets for Handgun Hunters 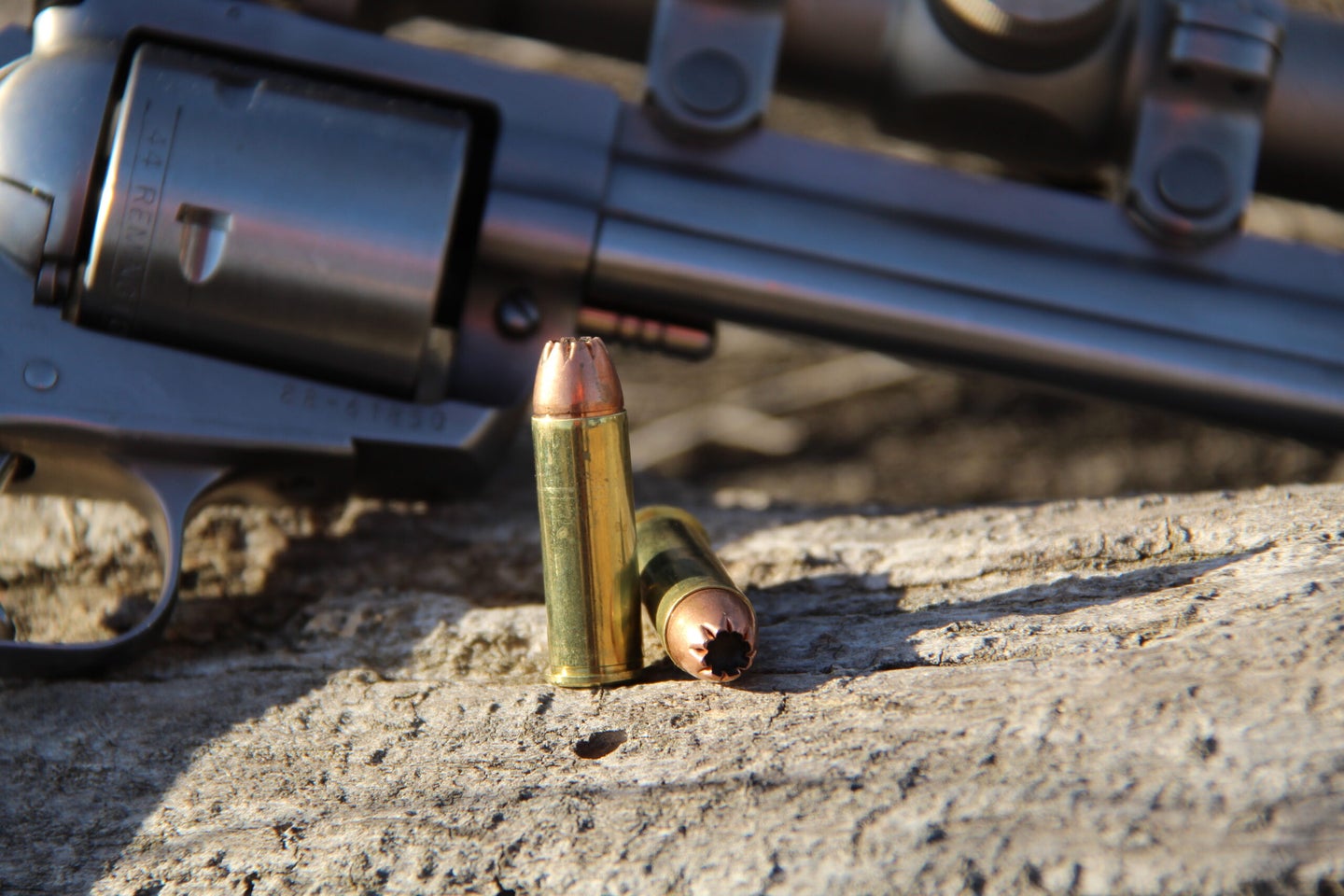 There are a number of suitable handgun cartridges for big-game hunting, but to obtain the best performance you need the right bullet—a lesson I learned the hard way on my first handgun hunt. When I was a teenager, I wanted to take up the mantle of handgun hunting and chose a suitable weapon—a Ruger Redhawk in .44 Magnum—that I could shoot accurately to 50 yards. When a whitetail doe came within range I fired, but there was no visible reaction from the deer. I fired again and the deer started moving, and by the third shot the deer was at a full run. I was certain that I had somehow missed the shot.

But I hadn’t missed. The bullets I was using weren’t holding up. Even though the doe died within 100 yards I could have (and should have) ended it much more quickly. The right bullet would have done the job, and after that first experience, I’m more particular about my handgun hunting bullets.

Selecting the proper handgun bullet can be daunting, but there are several good options available today that will dispatch game quickly and effectively. Here are five cartridges hunters can depend on.

It’s not uncommon for centerfire bullet technology to cross over to handguns, and that’s the case with Fusion. Federal’s Fusion bullets are popular because they offer a molecularly-bonded lead core and copper jacket that ensures maximum weight retention and reliable expansion. Fusion bullets have skives in their jackets, and those skives initiate expansion even at low velocities. This combination of low velocity expansion and bonded bullet toughness make Fusion bullets a versatile choice for handgun hunters. What’s more, Fusion ammunition is relatively affordable for quality handgun hunting ammunition: the 10mm load shown here is a new addition to the line and cost $28 per 20. That load drives a 200-grain Fusion bullet at a velocity of 1,200 fps and generates plenty of punch for deer-sized game.

Hornady’s Handgun Hunter ammunition utilizes MonoFlex bullets that feature a copper alloy jacket with an elastomer insert. When the bullet strikes, the elastomer compresses rapidly and initiates expansion. Skives on the bullet further help with expansion, and MonoFlex bullets create large wound channels and impart tremendous hydrostatic shock. This effective transfer of energy ensures clean, consistent kills, and that’s what I experienced while hunting whitetails in Nebraska with this ammo. I killed three deer on that trip—two bucks and a doe—with two different .44 Magnum handguns firing MonoFlex bullets. Ranges varied between 50 to 65 yards and all three were one-shot kills. Later inspection of the recovered bullets showed uniform expansion and significant straight-line penetration: one bullet was recovered in the center of the animal’s chest while the other two were retrieved from under the hide on the opposite shoulder. Handgun Hunter is available in seven different calibers from 9mm Luger to .460 S&W Magnum.

Swift’s A-Frame is another crossover bullet that has been extremely popular as a centerfire projectile. As the name implies, the bullet looks like an A in cross section with front and rear lead cores separated by a layer of copper. A-Frame bullets are extremely popular with dangerous game hunters (I shot my cape buffalo in Mozambique with an A-Frame bullet at my PH’s request) because they provide a level of consistent performance few other bullets can match. Federal Premium offers a line of handgun ammunition loaded with Swift A-Frame bullets, and if you’re looking for a single bullet that is effective on a wide range of game at varying ranges then A-Frame ammunition is a good option. Currently, Federal offers eight different A-Frame handgun hunting loads in calibers ranging from .327 Federal Magnum to .500 Smith & Wesson Magnum. A-Frame ammunition isn’t particularly cheap, but these premium bullets perform extremely well.

Partition Gold bullets feature a copper jacket that is bonded to the two-piece lead core. The front and rear sections of the lead core are divided by a layer of copper that helps to prevent over expansion while maintaining significant weight for deep, straight-line penetration and have made Nosler Partition bullets a favorite choice of big game hunters for years. The hollow point design initiates expansion at lower velocities while creating a wide wound channel and transferring tremendous energy. Sadly, Partition Gold ammunition is no longer in the Winchester ammunition lineup but it’s still available for sale through distributors and if you can get your hands on a box the stuff is wonderful. The .460 S&W load, shown here, produces over a ton of muzzle energy, and the bullet’s durable construction makes it tough enough for big, tough game like elk and moose. Winchester’s Dual Bond bullet, successor to Partition Gold’s position as one of the brand’s premium hunting projectile, are also highly effective based on reports from those who have hunted with them, but I’ll always have an affinity for the tough, accurate, Partition Gold.

Read Next: The Best Handguns for Big-Game Hunters

Barnes is now owned by Sierra Bullets, and while the acquisition is certain to bring about changes to the Barnes brand let’s hope that the all-copper Barnes XPB HP bullet remain in production. These bullets are used in Barnes’s VOR-TX Hunting Handgun line of ammunition and they perform well through a variety of handguns. The skived hollow point initiates consistent 2x expansion for tremendous shock and energy transfer and those who live in areas of the country with lead bans can legally use this ammunition. I tested Barnes’s .454 Casull load (250-grain XPB bullet at 1,700 feet from the muzzle) and found it to be exceptionally accurate. As you might imagine, this is not a load that lacks energy: at the muzzle the VOR-TX .454 load generates 1,605 foot-pounds, and at 50 yards the .454 load is still carrying over 1,200 foot-pounds of energy, more than twice what the .44 Magnum load generates at the muzzle. Those kind of energy levels can wreck a weak bullet, but the Barnes XPB is tough enough to withstand that type of power. For that reason, these bullets are great for hunting a full range of game from deer and hogs to bear and moose.