With Federal Premium Ammunition passing the century mark, we look back at some of their most iconic loads 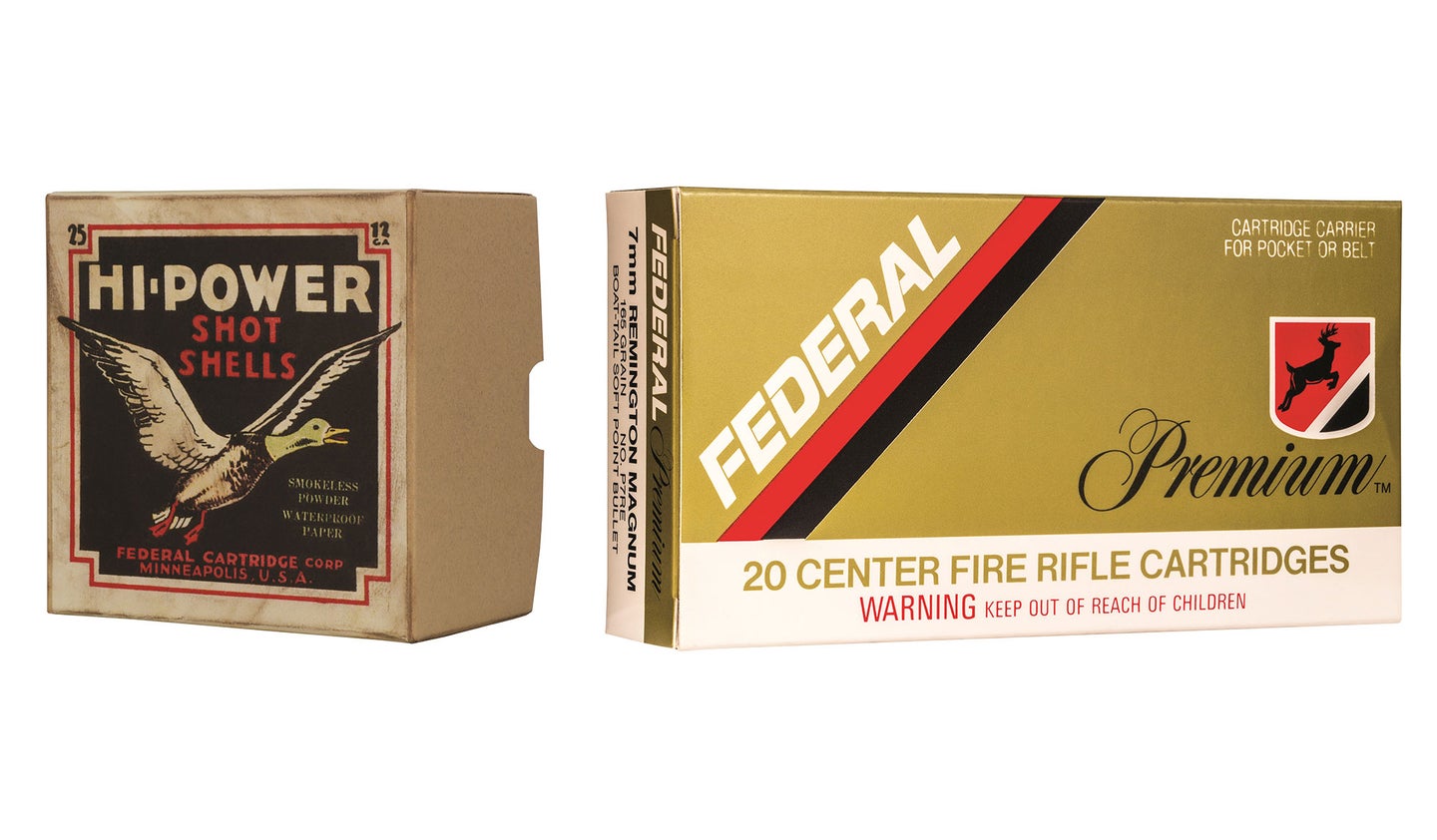 A look back at a century's worth of ammunition. Federal
SHARE

Federal Premium Ammunition surpassed the century mark this year, making it a true icon not just in the ammunition industry but also in American manufacturing. In its 100th year, Federal introduced the .30 Super Carry showing that the company is still looking to innovate after all this time.

But Federal’s success had an unlikely beginning. Charles L. Horn, president of BB manufacturer American Ball Company, was simply looking to buy machines in order to make paper tubes to hold BBs for air rifles. Through some serendipitous business dealings he ended up owning the entire Federal plant in Anoka, Minnesota, along with another investor. And thus the company we now know as Federal Premium Ammunition was born.

From there, the company’s timeline includes plenty of experimentation as well as some failed projects. But more than anything, Federal has consistently turned out loads that hunters and recreational shooters will instantly recognize for their performance in the field and on the range. So with some help from the Federal archives, we compiled 100 of their most iconic loads. Here they are, listed from the newest to oldest.

1) 30 Super Carry HST: In April 2022, the company introduced the .30 Super Carry, which is designed to increase the capacity of micro-compact pistols while maintaining 9mm ballistic criteria—or close to it.

2) High Over All competition shotshell

A direct descendent from the Trophy Bonded Bear Claw, Terminal Ascent is a bonded bullet with a lead core atop a copper shank. The AccuChannel grooves on the bullet’s shank help with accuracy, and the polymer Slipstream tip is designed to promote expansion. Altogether, the bullet was designed to hold together for close shots on big game, but also expand at lower velocities and long ranges. The Federal engineers accomplished their mission and Terminal Ascent is one of the best all-around big-game hunting bullets out there.

5) FireStick. Fast and easy to load in a muzzleloader, it contains pre-measured loads of Hogdon Triple Eight powder, sealed in a polymer casing.

7) HammerDown. Federal partnered with Henry rifles to design a load specifically for lever-actions. It features bonded bullets and case rims with a special bevel for side-loading gates.

12) Federal Shorty Shotshells. At just 1 3/4-inch, they allow you to increase magazine capacity in your shotgun.

18) Non-Typical Whitetail. An affordable load for the deer hunter who wants accuracy, reliability, and performance.

32) Prairie Storm. Utilizes the Flitecontrol wad with No. 4, 5, and 6 lead shot for pheasant hunters.

33) 3-inch .410 bore shells. After the introduction and success of the Taurus Judge, Federal introduced special .410 loads optimized for the pistol.

37) .327 Federal Mag. Launched in cooperation with Ruger in 2007, the new cartridge lengthened the .32 H&R Mag. and provided effective defensive performance in smaller-caliber revolvers.

In 2007, Federal introduced Black Cloud with their Flitecontrol wad to deliver tighter patterns for waterfowlers looking to maximize their range. Since its inception, it’s been one of the best steel loads for hunting ducks and geese. Ten years later, Federal optimized the popular shotshell with their Flitecontrol Flex wad, which has rear-deploying brake fins and side-mounted vents. The wad separates from the payload at the optimal time after leaving the muzzle to increase pattern density and maintain consistent velocities. In 2018, Federal included Black Cloud TSS options which combine tungsten pellets with steel pellets.

This affordable and accurate load features bonded bullets with a typical lead core and copper jacket, but the way the elements are fused (electro plating the jacket to the core) helps them retain weight on impact. Federal teamed up with Speer on the forming process which creates a skived tip, so that the jacket and core create petals under controlled expansion. The precise formation of these bullets also increases their consistency, reducing the chance of fliers often associated with economy-priced cup-and-core bullets. The Fusion line was created with deer hunters in mind and it’s one of the best whitetail loads on the market.

44) Power-Shok. A conventional rifle load for the price-conscious hunter.

51) The Expander Sabot Slug. Federal partnered with Barnes in 1999 to offer the Expander all-copper sabot slug.

Without the Trophy Bonded Bear Claw, many of Federal’s finest bullets might not exist. This bullet bloomed from necessity during the 1980s. After a brutal encounter with a Cape buffalo that refused to go down after seven hits with a .375 H&H, Jack Carter set out to create a bullet that would both penetrate deeper and expand better on the biggest game. This inspired the “Bear Claw,” a bullet with a pure copper rear half and a lead-filled cavity in the front. The design wouldn’t fragment or pancake on impact, driving deeper and retaining more of its energy.

Soon after the Bear Claw’s inception, Federal purchased the design and expanded the Trophy Bonded Bear Claw line. The gave rise to many contemporary loads that are successful today.

Federal’s Hydra-Shok resulted from the FBI’s search to find the best personal-defense round for agents and other LEO after the Miami Shootout of 1986. To create a round that would pass the FBI protocols, Federal designed a load that featured a large hollow-point with a center post, designed to provide rapid expansion and penetration. Federal’s Hydra-Shok soared through the FBI Ammunition Test Protocol.

In 2018, Federal evolved their Hydra-Shok design, adapting to new FBI Protocol standards, which resulted in their Hydra-Shok Deep. However, the original Hydra-Shok still remains a staple in Federal’s handgun lineup today.

64) No. 1 and No. 000 buckshot Premium loads. Included buffered, copper-plated shot

69) .22 Magnum. Better bullets and manufacturing gave the .22 Win. Mag. a new burst of popularity in the 1980s. Federal quickly jumped on board, offering a fast-stepping rimfire round.

73) Nosler Partition and Sierra boat tail. Federal loading these two bullets blazed a new trail by providing factory ammo for hunters that had been solely available to handloaders.

It’s hard to imagine Federal without centerfire hunting ammo, but the company’s first 40 years didn’t include any. After supporting America’s national defense effort in World War II and the production of countless shotshells and rimfire cartridges, Federal expanded its offerings with centerfire rifle and handgun ammunition in 1963. This original rifle lineup covered the popular cartridges of the time including .222 Rem., .243 Win., .270 Win., 7mm Maus., .30-30, .30-06 Sprg., .300 Sav., .303 Brit., 8mm Mauser, .32 Win Sp., and .35 Rem.

87) 2 3/4-inch Magnum Hi-Power Shotshell. Packed with 4 drams powder equivalent behind a full 1 ½ ounces of lead shot, this would be a powerful hunting load even today.

88) Federal’s Mortar Ignition Shell. Resembling a short and stubby shotgun shell, it inserted in the base of a mortar bomb during WWII.

98) Hi-Power Rimfire. Available in smokeless or semi-smokeless Lesmok, .22 Long and Shorts were more popular than the .22 LR at this point.

Two months after Charles Horn purchased Federal, the company’s first products were the HI-POWER shotshells from the former company. Under the HI-POWER line, Federal indicated their low, standard, and high brass loads with Dixie, Standard, and Ranger labels, respectively. The HI-POWER boxes included a black background with the company’s famous Mallard stretched across the front. In the 1930s, Federal phased out HI-POWER as an overall label, replacing it with Federal as the main branding.

Before the Premium line, bonded bullets, and Flitecontrol wads, Federal cut its teeth on BBs. Charles Horn originally bought Federal because he wanted to make paper tubes for air rifles. Federal offered BBs from the 1920s through the 1970s. Initially, BBs were offered in lead, steel, and even cadmium plated steel. But due to toxicity and malfunction issues, cadmium and lead BBs were dropped, leaving copper-plated BB’s as the sole option.

Early on, the company sold air rifle shot in cardboard tubes similar to the size of a 12-ga. Shotshell. Tubes contained three ounces of shot (roughly 225 BBs). By the 70s, plastic bulk packs that held 2,000 BBs replaced the smaller cardboard tubes. By about 1928, Federal discontinued their BB line and moved toward shotshells.