The best shooters in the business reveal their tactics 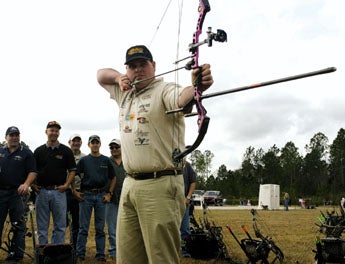 At a recent 3-D tournament in Florida, I watched champion archers routinely hit quarter-sized spots on 3-D targets that were positioned at unknown distances. They made shooting a bow accurately look so easy I started asking them what advice they would give the average bowhunter. Here’s what five champion archers had to say.

Jesse & Ginger Morehead
Ginger Morehead, Archery Shooters Association (ASA) Women’s World Champion and International Bowhunting Organization (IBO) Shooter of the Year, and her husband, Jesse, an 11-time world champion, are particular about their hunting equipment. Ginger opts for stiff carbon arrow shafts. “I want to make sure I don’t lose any kinetic energy to arrow flex, and aluminum shafts tend to lose a lot of energy that way,” she says.

According to the Guinness Book of World Records, Jesse holds the record for the longest broadhead shot (742 yards). He explains, “In order to attain perfect broadhead launch, we lower our nock point below our field-point setup. We’ve found that this significantly flattens arrow flight. Most archers practice with their field points and then screw on their broadheads without moving their nock points. This is a fundamental mistake that leads to poor broadhead flight.”

Bobby Ketcher
Bobby Ketcher, two-time IBO World Champion and IBO Shooter of the Year, hunts with a 35-inch axle-to-axle bow that has a generous brace height. “My short bow is maneuverable as well as forgiving, and its low let-off [BRACKET “65 percent”] has less play because the bow is under more tension at full draw,” says Ketcher.

Ketcher advises hunters to shoot a draw weight as heavy as they’re comfortable with. Heavy draw weights with low let-offs and high brace heights get the shot off faster, thereby decreasing the chance of error.

Jeff Hopkins
With 47 national titles, including eight world championships, Jeff Hopkins (shown below) is arguably one of the most accurate archers who ever lived. “When I’m hunting I shoot a one-pin sight set at twenty yards. If a buck’s not within that range, I pass on the shot,” he says, despite his proficiency.

Hopkins also has a tip for judging distance. “Leave your ego at home and take a range finder. Even professionals find it difficult to judge distance, especially under hunting pressure.”

Randy Ulmer
Randy Ulmer, seven-time ASA World Champion, says, “There is a trend today to use peep sights with smaller holes. This is a mistake. Bowhunters should use a large peep-sight aperture so they can quickly find the target.”

When the bow season draws near, Ulmer advises bowhunters to shoot just four arrows a day spaced at least an hour apart. “You get only one chance when a buck comes by, so you should practice accordingly.”