Flocks of a Feather 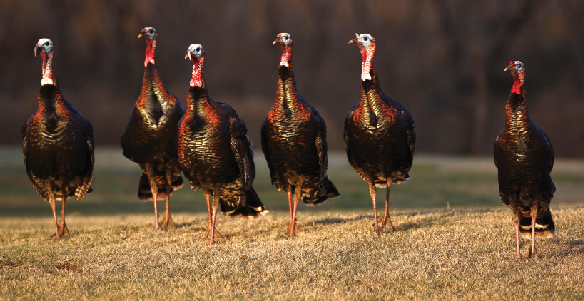 A "yearling gobbler flock" is a bachelor group of up to a half-dozen super jakes.
SHARE

Wild turkeys group up in fall, but the flocks aren’t random compilations. Rather, similar birds end up together for a variety of behavioral and biological reasons.

Family Flock
After a summer together, hens with young-of-the-year birds remain in family groups. Juvenile turkeys, especially young hens (jennies), aren’t ready to strike out on their own. And there is safety–more eyes and ears–in numbers. In fact, family groups often join ranks to grow the flock’s size, sometimes to more than 30 birds as fall progresses. Much of this flocking occurs as hens and their broods come together around a prime food source, such as a harvested grain field or productive oak ridge. An old “master” hen usually leads a combined family flock.
**
Jake Flock**
As autumn progresses, family flocks are less and less likely to contain young gobblers that hatched in spring. These three- to six-month-old jakes have grown big over the summer, and by now are larger than their mothers. They set out on their own, joining jakes that have left other family groups. These raucous boy gangs squabble and carry on as they compete to see who’s the boss. This is an attention-getting, predator-attracting activity that a family hen flock doesn’t need. Jake flocks may number up to a dozen or more birds, and they stay together through fall and winter, into the following spring.

Broodless Hen Flock
Adult hens that weren’t bred in spring, or that lost their nests or broods, end up together. Since these hens weren’t associated with a family group throughout the summer, autumn finds them all in the same predicament. A lone turkey is a turkey in danger, so unattached hens join ranks for company and safety. Broodless hen flocks stay small, numbering around four to eight birds.
**
Yearling Gobbler Flock**
Year-and-a-half-old gobblers form their own young bachelor groups of up to a half-dozen birds. Many of these birds were together as jakes the previous spring, so some hunters call these turkeys “super jakes” in fall, in reference to their 6- to 7-inch beards and 1⁄2- to 3⁄4-inch spurs.

Yearling gobblers form an exclusive group because young jakes won’t get near them for fear of getting beaten up, and the yearlings themselves won’t approach adult gobblers for the same reason. Like jakes, these gobblers do a lot of sparring in autumn, and they are often the source of fall gobbling as the birds compete to figure out their pecking order.
Adult Gobbler Flock
Big adult gobblers–birds 2 1⁄2 years and older–come together in loose bands of three to five birds in fall. The group’s size generally stays small, but may grow a bit as winter approaches.

As with other flocks, these turkeys spend much of their time just feeding and surviving, but they also spar freely to determine which bird is dominant. Biologically, it’s best to establish the pecking order now, during autumn’s abundance, then drop into rank for a calm and quiet winter of leaner times.