Early in the spring season, when turkey flocks are still in winter formation, your one or two decoys may not... 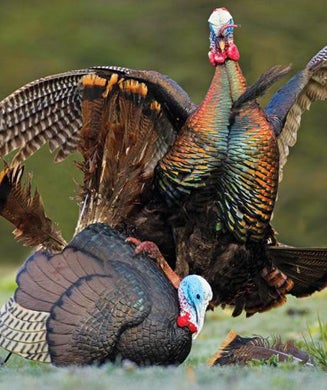 Early in the spring season, when turkey flocks are still in winter formation, your one or two decoys may not be enough to attract a gobbler. So create a flock. Borrow a collection of assorted dekes from your buddies. Buy cheap foam models from the sale bin at your sporting-goods store. Resurrect tattered veterans from the back of your gear closet. Just as with field spreads for geese, make sure you have a mix of feeding, sentry, and loafing turkey decoys. And leave room in the middle as a “landing zone” for incoming gobblers.

This flock approach won’t always work, but the time to try it is now, in the first days of the new seasons, especially if your area has a late winter that keeps the real turkeys bunched up and wary.

Here’s a guide to when fake flocks work, and when they might be more trouble than they’re worth.

1) Flock Up
When you’re hunting an open field, set up a big flock of decoys and wait for your actors to get attention. The birds will come to you—eventually—though it may be later in the day when the flock hits the field to feed.

Near wintering areas, a big flock can look like real birds dispersing after feeding.

As summer approaches, late-season gobblers will re-form bachelor groups. Use a handful of jake or adult tom fakes as the breeding phase fades.

2. Size Down
If you hunt mountainous terrain, you don’t want the hassle and weight, especially when you have to cover a lot of ground just to find the birds.

Big spreads are not a tactic for high-pressure public land, especially if you hunt within view of a road. More than a handful of decoys attracts the wrong kind of attention.

Limit decoy sets to a hen and jake when hunting from a stationary blind. This dictates precisely where the gobbler should come—likely to the shortbeard fake—so you can take a well-placed shot.

In those places where gangs of jakes dominate solitary longbeards, a single jake decoy may be more effective than a big bunch of intimidating turkeys that has strutting toms and numerous fake jakes.

A big-flock approach with lots of hen decoys loses effectiveness as the season progresses and real hens start to scatter and nest.

Spread Strategies
1) Surround a gobbler decoy with a big hen harem. Face the gobbler toward a jake decoy mounting a belly-down hen. This arrangement will enrage a gobbler that senses a threat to his dominance.

2) Face a full-fan strutter and a couple of jake decoys away from you, looking toward where turkeys will likely enter a field. This challenges the dominance of a territorial gobbler.

3) Turn a full-fan gobbler and fake shortbeards so they’re walking away from where you expect the real gobbler to enter. This arrangement suggests subordinate status.

4) Crowd a large hen decoy with smaller hen decoys. This arrangement suggests a challenge to a territorial boss hen. When she comes, spitting and cussing, a strutter is likely to follow.

5) Place a longbeard and a jake decoy face to face, with fake hens nearby. Call a series of aggressive purrs. Turkeys love a good fight. A gobbler just might hustle in for a front-row seat.