Turkey Hunting Tips: Use These Calls When Toms Go Quiet

Photo by Tom Martineau/The Raw Spirit You sell those calls like a hot hen, but the gobblers aren’t buying. The... 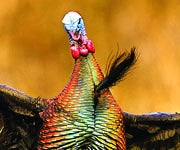 You sell those calls like a hot hen, but the gobblers aren’t buying. The boys would rather run with their fellow red heads. When male turkeys don’t want your sweet hen yelps, you need to rethink your hunting tactics. The first trick in your bag should be to sound like another gobbler, but there’s no single prescription that works the entire season. Instead, follow these cues.

Early Birds
Male turkeys sometimes remain in small gobbler gangs after leaving larger winter flocks. Tracking studies show jakes often cover the most ground. A subordinate male in the wake of a longbeard is also a common sight during this transition time.

How to Hunt: Gobbles draw gobblers. When you’re hunting male groups without hens, locate roosted turkeys by (1) listening without calling; (2) drawing shock gobbles with an owl, crow, or other locator call; or (3) gobbling. Gobble sparingly. Just one well-timed call after flydown might bring those red heads running in a gang. Any time you strike a gobble call, watch for other hunters. In fact, the best rule for where to use a gobble call is on private land where you are the only hunter.

Mid-Season
Later in April, flocks are pretty much established. A dominant strutter shadows his hens, waiting to breed one. They move from the roost to nearby food sources, where female turkeys later raise broods. Subdominant male birds hang close to the boss. Can you call one away from live hens? Maybe, if you act like another interloping gobbler.

How to Hunt: Gobble or gobbler yelp to do one of several things: (1) pull in a subdominant gobbler; (2) call in the whole group, as gobbles draw hens too; or (3) fire up gobblers to fix the flock’s position before your next move. Staking a male decoy at your setup, especially a jake, could seal the deal. Throw in some aggressive fighting purrs, and gobblers might come running to the mayhem.

Late Season
Hens disappear and are likely nesting. Days heat up. Gobblers travel together again. Some are still driven to find hens; others return to male groups, or will soon, and stay with them through summer and autumn. It’s time to pump up your spring hunt with some calling tactics usually reserved for fall.

How to Hunt: A soft gobbler yelp can interest late-season male turkeys just as it does in autumn. This call is deeper, with a slower cadence–yawp-yawp-yawp–than fast, high-pitched hen yelps. Make the call and keep your eyes and ears open for an approaching red head bobbing through the greened-up woods. This is a very effective midday call near strut zones, where toms are accustomed to hearing other gobblers.

Three Easy-to-Play Deceptors that Call Up Tough Toms:
Our hen clucks and yelps echo on mountain ridges and in swamp bottoms each spring–but some gobblers just won’t come in. Sometimes male turkeys want to hang with other gobblers, or even run their own kind off the property. These calls are designed to speak to those toms.

#1 – Gobble Tube
Use Turkey Thugs Gauntlet Gobble Shaker from Quaker Boy to locate and even call in gobblers. ($22)

#2 – Fighting Purrs
Sound like a couple of gobblers squaring off with the Ultimate Fighting Purr from Knight & Hale Game Calls. ($30)

#3 – Gobbler Yelp
Late in the season, use the easy-playing Thunder Ridge Series Slate from Zink Calls to lure in male turkeys with husky gobbler yelps. ($30)