Pack a rod and head to the cool, dark reaches of mountain timber, where the trout are dumb and the crowds never follow 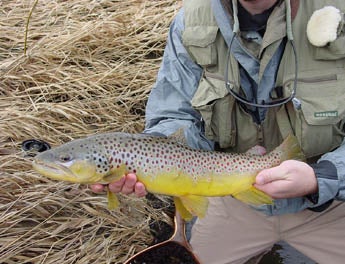 Not many places are left in the wild, wild West where the adventuresome trout angler can escape the teeming masses. Even streams that cut through wilderness areas no longer guarantee solitude. Ah, but here’s a secret: The Old West still exists for trout anglers. You just have to know where to look.

Here in Colorado (and throughout the Western states), anglers in the know don’t worry about how the invading hordes will affect trout fishing. We grab our equipment, pack a couple of wicked green chili burritos for lunch and act like elk when hunters invade their range in the fall: We head for dark timber that grows dense through mountain draws and back inside basins. There, strange creatures slip phantomlike through shifting shadows, small creeks run primeval and trout are so unaccustomed to anglers they don’t know there’s a difference between a genuine caddis fly and an artificial tied on a No. 14 hook.

Fishing dark timber isn’t for everyone. If feeling like you’re constantly being watched from the surrounding shadows causes you to spend more time looking over your shoulder than casting; if the sharp snap of a limb, followed by sudden silence, sends tremors up your spine; if slight, obscure movements caught out of the corner of your eye stop your breathing for a moment, you best fish sunlit waters where other anglers gather. On the other hand, if such eerie happenings don’t faze you, then by all means seek out trout in the dark timber.

Well-kept secrets
Dark timber creeks generally go unheralded, and for good reason. Though these abundant, miniature streams often hold numerous wild trout in the 4- to 10-inch range, too many man-hours of fishing over a short period would set back any one fishery for years to come. Which explains why you seldom hear about them, except by word of mouth. Or you can find them through your own efforts by studying forest service maps for the particular area that interests you. Just select an interesting prospect, pack your burritos and check it out.

I have several creeks around Colorado I guard with the same shifty furtiveness as an 1850s prospector protecting the location of a hidden gold mine. One lies in the South San Juan Mountains above Platoro. Like most of its type, it’s only 5 to 6 feet wide. Also typical are what might be considered surprising depths. A 6-foot stretch running alongside an undercut bank is 4 feet deep, and a couple of holes below logjams are deeper than that.

Battling browns
Last summer I was fishing one of those holes and caught three smallish brookies. Just as the last popped the Gray Hackle dry I was using, I saw a brilliant flash roll deeper down. It looked like a nice fish. I gave the pool a rest before making another presentation. When I did, the fly had barely hit the surface before an enormous head, followed by a gargantuan body, grabbed that puny Gray Hackle.

All day I had caught and released brookies up to about 10 inches, and a couple of 8-inch cutthroat trout. Suddenly I found myself in a reel-smoking, line-stripping, rod-torturing, all-out brawl with the mother of all brown trout. Not a pretty sight, amigo: Me screaming bloody murder for all I was worth, it flipping me various obscene gestures with each leap, and every pine squirrel within a hundred miles heading for safety across the Continental Divide.

Dark-timber creeks themselves are like clear paths winding through tall hedge mazes, leaving little space for the angler, but that monster trout I’d tied into had all the room it needed to charge around. It darted and ran with reckless abandon, like a jalopy in a demolition derby. There were times the bruiser came dangerously close to wrapping the puny leader that joined us around a cabin-sized log beneath which it had taken up squatter’s rights.

Sometimes, though, the gods of fishing do smile on anglers, and when it was all over I creeleed a 25-inch brown. where the wild things are Trout that size are unusual but not unheard of when fishing deep-timber creeks. The best of these streams are off the beaten path and come down mountains through places thick with old-growth spruce. Surrounding vegetation is so green and lush it resembles a rain forest, and the ground underfoot is spongy and covered with moss. The air is always cool, damp and deeply shadowed. If browns are in the fishery, you just might tie into an old hook-jaw. Maybe even a 16-inch cutt, or a chunky, 2-pound brookie. Those I can swear to, but I have heard of bigger fish. I have also heard tales about mysterious creatures seen slinking off through the murkiness. I tend to believe those stories, too.

After all, fly rod in hand, a selection of popular Western patterns in my vest and, just in case, well-worn running shoes on my feet, I frequent such places myself.