Rarest Trout of All

Good luck trying to pull a Paiute from your local stream. 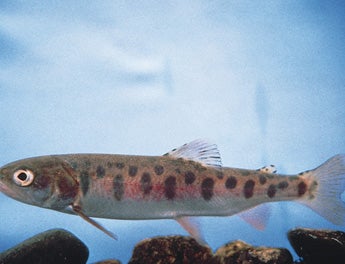 It’s unlikely we’ll be able to fry one up anytime soon, but every trout snob out there will probably want to add the exotic Paiute cutthroat to the list of fish he hopes to catch someday.

The Paiute is considered the rarest of all trout in the United States and possibly the world, or so says the U.S. Fish and Wildlife Service. According to the Associated Press, the trout’s home water is just a nine-mile stretch of Silver King Creek, which flows into the Carson River south of Lake Tahoe in California’s remote Alpine County.

The biggest threat to the Paiute’s survival is competition from non-native fish species. To that end the USFWS is working with California wildlife officials on a plan to use Rotenone-a fish-killing chemical-to rid a lower stretch of the river of fish so that the Paiute can take up residence there.

Paiute trout were transplanted into four other waterways in California about a hundred years ago and these are the only areas where the fish currently survives. If the poisoning of the lower creek eradicates competing fish species, it would open up another 11 miles of habitat for the Paiute.